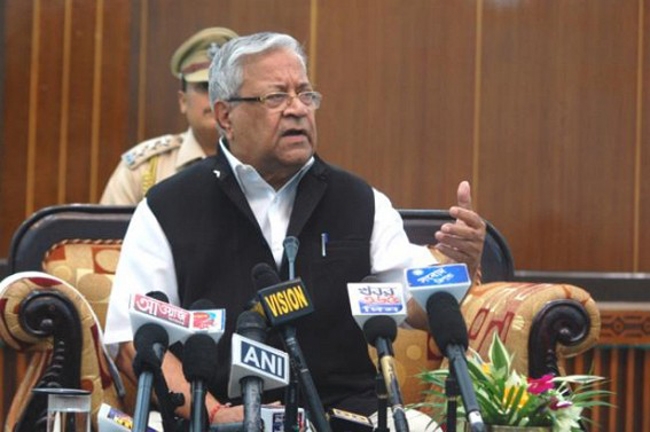 Media always looks for some controversy for news value, and there is nothing wrong in it. For, it is their business. To succeed in business they resort to various tricks of the trade. In doing so, many a times they cross the limits and land them in a mess. The latest example is the statement attributed to Assam and Nagaland Governor Padmanabh Acharya.

All the newspapers and media channels including the foreign ones carried prominently the purported statement of Governor Acharya in which he had advised rather curtly, the Indian Muslims to feel free to migrate to either Pakistan or Bangladesh should they feel that they were persecuted in India.

“India is for Hindus”, the Governor was supposed to have said. But this is half truth. And any half truth is more dangerous than the whole truth or a whole lie. Here in this case to serve the news with some added ingredients the media only picked up a selective portion of the entire statement stripping it of the context and presented to the readers/viewers as ‘whole truth’, thus creating confusion and acrimony.

The Governor did say that ‘India is for Hindus’. But he also said this: “Hindus from different countries can come and stay here. ...any Hindu persecuted in any other country will have to come to India only, because it is his motherland. If he is in trouble in any other country, he will have to come to India only. They cannot be outsiders, and it is our duty to provide shelter to them”.

He was responding to questions from journalists on the sidelines of a function organized by Archeological Survey of India at Raj Bhavan. Acharya’s comments came when journalists wanted to know the Governor’s views on the recent Home Ministry notification regularizing stay of minority refugees from Bangladesh and Pakistan.

The Governor had also said that he wanted ‘an error-free’ National Register of Citizens (NRC) so that the names of any illegal immigrant from Bangladesh or Pakistan are not included in the NRC.

The ‘half truth’ in this logical statement was immediately picked up and the Times of India was the first to paint it as ‘controversial’ one. Dawn, of Pakistan went a step ahead accused the Governor of “stirring the saga of racial prejudice and religious apartheid” identifying it with the Modi government.

Indian Express described this as a ‘fresh row’ by the Governor. The paper has in particular taken exception to his statement related to Muslims. He had said “If the Indian Muslims feel that they are persecuted, they are free to go anywhere, including Pakistan and Bangladesh”.

Newsgram.com quoting Assam Chief Minister Tarun Gogoi said that the Assam Governor was behaving more like a RSS Pracharak. “Acharya has also lost his ability to serve as a governor. He has also been working more like a BJP leader and a RSS pracharak” Gogoi had commented on his statement.

Hindustan Times landed Governor Acharya in the “raging intolerance row” by making such a racial statement.

The Congress termed the comments unfortunate and shocking. “It is clearly indicative of the way RSS and BJP functionaries think and continue to think even when they are in a constitutional post. Bondage or umbilical cords with parent remote organisations, be it RSS and BJP should be severed when you assume a constitutional post,” party spokesman Abhishek Manu Singhvi said.

Assam Chief Minister Tarun Gogoi went a step further and demanded immediate ouster of Governor Acharya. "By saying that India is for Hindus, Acharya has broken the oath of maintaining the unity and integrity of the country, which he had taken in the name of the Constitution. Instead of working as constitutional head of the state, the governor is working as an RSS pracharak. In order to maintain unity and pace of development in the state, a new governor should be appointed. Otherwise he will work as a pracharak to help the BJP in next year's Assembly elections," an official statement said, quoting Gogoi.

I stand to defend the Governor. What he had said was perfectly correct. As England is for English people, France is known as land of the French, America is for Americans, likewise Hindustan or India that is Bharat is for Hindus. There is nothing wrong, unconstitutional or racial or discriminatory in this statement. The Governor made a very simple yet universally accepted observation that any country in the world is known after its people because people are the nation.

And who are those people after whom this country is known? Obviously Hindus. Because they are the ‘sons of the soil’ since the hoary past. Perhaps, India is the only country that has earned the status of a nation when the present religions and races were not even born. The antiquity of Vedas tells us existence of a well developed nation here and there is a national song in the Vedas. At that time there were no Muslims, no Christians, no races and no groups.

In fact, Hindus are the most tolerant nay inclusive people. The invading tribes of Shakas, Hunas and Tartars came here and over the period of time got assimilated in the main society. They became one with the natives. It was only when the followers of Semitic religions invaded this land the Hindus, as divided they were, found it difficult to include them in their canvass. They were the prosylitizing races and tried to convert the Hindus to their faiths by fraud, foul and at the point of the weapon. Still, millions of Hindus just refused to get converted, sacrificed their lives to uphold and protect the Dharma. Over 90 percent of Muslims and Christians in India are original Hindus whose forefathers were converted.

During the freedom struggle two schools of thoughts were prevalent. One believed that India was an ancient nation whose date of birth was not known to the history. The Hindus developed this as a nation based on strong edifice of human values and ethos and gave the world a holistic world view that would lead the humanity on the path of peace, progress and peaceful coexistence guaranteeing wellbeing of all. Swami Vivekananda, Lokmanya Tilak, Lala Lajpatra Rai, Bipin Chandra Pal, Yogi Aurobindo, Veer Savarkar, Dr K B Hedgewar, M S Golwalkar, Sardar Patel, Dr S P Mukherjee, Pt Deendayal Upadhyaya, subscribed to this school of thought.

The other school believed that India as a nation was born on 15th August 1947 and that “ours is the nation in the making”. They felt that it was the British who converted this country inhabited by numerous cultures, languages, peoples and groups into one political entity called India and after independence now it was their duty to protect this ‘secular character’ of this new nation where all the religious groups, ethnic identities and linguistic and racial minorities would live in harmony and peace.

Unfortunately, this defective and false notion about “nation in the making” got engrossed so deeply in the modern Indian psyche that anyone who talks of India as an ancient nation or a Hindu nation or Hindu rashtra, he is immediately dubbed as ‘anti-minorities’, ‘anti-secular’, ‘obscurantist’, ‘chauvinistic’, and so on. When falsehood is accepted we can expect similar reactions to Governor Acharya’s observations.

In fact Hindus are the most sufferers. They faced invasions, conversions, slavery for nearly 1200 years and yet they are ready to accept all those who actually treated them in the roughest manner as their own. This magnanimity of Hindus is the rarest of rare virtues any human race has ever shown. Late Balasahab Devras used to comment: “To teach secularism to Hindus is like carrying coal to Newcastle”. This secularism, honour and respect for other faiths and races is imbibed in the very behaviour and character of the Hindus. However, Veer Savarkar described this magnanimity as ‘Sadgun vikruti’ excess of goodness on the part of Hindus for, they had to suffer unmitigated miseries for being too good to the others.

If Governor Aacharya had said that those Muslims who felt persecuted in India were free to migrate to Pakistan or Bangladesh then he was only trying to correct this ‘sadgun vikruti’ of the Hindu race. The country is aware of the havoc the illegal immigrants in Assam have been playing threatening the very existence of indigenous Assamese and Janjati people. The AASU that spearheaded six year-long agitation which finally brought them to power could not resolve this complex issue. They, on the other hand fell prey to this ‘secular’ politics of appeasement of minorities. The Congress which is ruling the state for the last one and half decade only confounded the problem and the latest religious census figures pointed to this stark reality of Assam being converted into a Muslim majority state.

These secular elements also misinterpreted the word Hindu time and again confining it to a particular religion like Islam and Christianity which is not so. Even the Supreme Court of India had said that ‘Hindu’ represents a life style and not any particular religion. Former President Dr Radhakrishnan used to say Hindu as umbrella of all the religions. But out secular media and politicians failed to learn this correct meaning of ‘Hindu’ or they are deliberately undermining and insulting this great tradition known as Hindu which Swami Vivekananda equated with humanity.

This ‘Hindu denouncing secular approach’ of the leaders resulted in vivisection of the motherland into Pakistan and Hindustan. Those Muslims who preferred to stay in India should be congratulated for their loyalty to the country. Prime Minister Narendra Modi was the first Prime Minister who openly vouchsafed on the patriotism of Indian Muslims. In fact, Muslims had been the most pampered lot since post Independence era in the name of secularism and vote bank politics. However, there are blacksheeps too. The incidents in Kashmir Valley or in Muslim dominated areas of Bengal and Assam raised doubts about the loyalty. In this context the statement from Padmanabh Acharya about ‘persecuted’ Muslims need to be seen and analysed. What India needs today is the leadership that thinks for the nation rising above party, ideology and petty interests and treat all the people with equality and true spirit of secularism as enshrined in the Constitution of India. Anything that goes against this spirit of ‘Country First’ would be detrimental to our very existence as a nation. Making ‘India World Leader in 2020’ would in that case remain only a dream. Our secular politicians and anti-Hindu media need to understand this. Sooner the better.