Congress Vice-President and almost-designate future president Rahul Gandhi alias RaGa alias Pappu did it again. It seems he refused to learn any lesson from his election campaign outbursts against Rashtriya Swayamsevak Sangh (RSS) court summons notwithstanding.

But that was an old case. 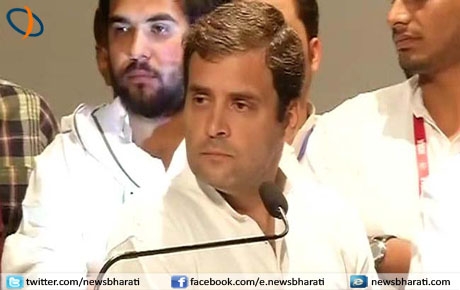 Very latest is his baseless but deliberate outbursts against the RSS. At a meeting of NSUI delegates who just cheered him and enjoyed his not-so-thematic speech, RaGa made some comments on RSS and its shakhas and ideology.

He said (at least that was reported by the media and newspapers) “RSS would never understand India as its philosophy was antithetical to the nation’s cultural diversity and pluralism”.

In the same breath he said “RSS wanted to enforce homogeneity in place of pluralism”. “They want everybody to follow one ideology. They are stuck, thinking nothing has changed in a thousand and nothing will change. Their discipline is an excuse to suppress differing viewpoints. Their ideology kills individuality”, he explained.

When he arrived at the scene the crowd greeted him with a spontaneous chaotic response in their bid to outshine “Modi-Modi” chorus that greets Prime Minister Narendra Modi everywhere at home and abroad. Rahul just fail to communicate with the cheering crowd for nearly 10 minutes. And the very first opportunity he got, he darted his criticism against the RSS.

“Look at the RSS, straight line”, RaGa launching frontal attack on RSS said. “Nobod can say a word of his own. If a differing view comes, lathis are rained on him. They tell you what to say, how to think. There is no internal dialogue. And now they want to stop internal dialogue that continuously happens in the country. They don’t understand India; every Indian has his viewpoint, has the freedom to make choices, and has the right to decide... they want to kill this”.

Asking the party's student wing cadres to fight RSS in educational institutions wherever RSS is imposing its ideology, Gandhi said, "Wherever RSS tries to impose its thought process, you stand and stop them. Wherever they want to bring the order of shakha, take the Congress party's disorder there."

Rahul also targeted Prime Minister Narendra Modi accusing him to push forth and impose this ideology of RSS on the country. “One person knows everything. Whether it is about farmers’ issues or education or even clothes, only one person knows everything. We say let everyone com, sit together and speak on issues. A solution will emerge. They (RSS & BJP) say you come and sit here silently...Only one person will speak”, he said.

In this speech the Congress Vice-President endorsed that there is a “disorder” and “indiscipline” in the Congress and all its fronts including the NSUI.

People of Nagpur haven’t yet forgotten those terrible days when the NSUI delegates indulged in a wild frenzy at railway station and in markets. Probably, they were acting in accordance with the inherent characteristics of ‘disorder’ and ‘indiscipline’ expressing their ‘individuality’ at their ‘free will’.

The country still remembers the 1984 holocaust in the wake of unfortunate murder of RaGa’s grandma and the genocide of innocent Sikh men, women and children when each Congress activist acted in the most ‘individual’ and ‘disorderly’ way and attacked the Sikhs.

His father the late Rajiv Gandhi (RaGa again, maybe a coincidence) had voiced his ‘individual viewpoint’ that when a big tree falls smaller things around it get crushed. This inspired the hundreds of ‘disordered’ and ‘undisciplined’ Congress workers to unleash their ‘individual anger’ against the hapless, innocent Sikhs.

The country has not also erased the memories of the internal emergency that was imposed by RaGa’s grandma Indira Gandhi for she in her individual viewpoint thought it necessary to save her political power. The same emergency provided the Congressmen to behave in the most disorderly manner against the RSS swayamsevaks and leaders silencing their voices of dissent against their leader.

There are umpteen instances of such ‘disorder’ and ‘indiscipline’ of the Congress workers in the history of India. The country had paid a very heavy price for this ‘disorder’ and ‘indiscipline’ in the past. Be it conceding to the partition of the country, aggression by Pakistan in 1948, 1965, 1971 and 1999, Chinese invasion of 1962, the emergency of 1975, the Kashmir imbroglio, the mess in the northeast and so on.

Ironically, it was the ‘disciplined’ RSS that rushed to the rescue and help of the beleaguered government in these hours of crises. Today RaGa can speak so freely against the RSS because the same RSS staked everything to restore the democracy and fundamental rights of the citizens in the country during the emergency. At least he should thank them and their discipline! 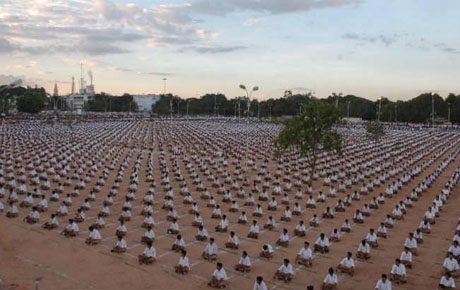 If the RSS abhorred the voice of dissent, what is happening in the Congress? Why did RaGa tear the copies of ordinance passed by Manmohan Singh government at a press conference? Does anyone have freedom to say anything that is slightly contradicting the line of the party leadership? Can anyone in the Congress speak against Sonia or Rahul Gandhi and even his sister Priyanka, though she is not an office-bearer in the party?

His outbursts against the RSS only exposed his hypocrisy, absurdity, crass ignorance about RSS and nothing else. Maybe he needs to be reminded of the fact that those who live in glasshouse should not throw stones at others.

As regards his criticism against Prime Minister Narendra Modi is concerned, it clearly shows RaGa’s frustration. He questioned Modi’s foreign trips and ridiculed that the PM does not have time to visit a farmer or a worker in the country. But what about his uninformed 56-day sabbatical when the party needed him the most?

RaGa has also said that Modi took lessons in statecraft from Manmohan Singh. If this is true, then this needs to be welcomed. This is a very healthy tradition Narendra Modi has instituted. Manmohan Singh is an acclaimed economist and had he been given the full freedom (which he was deprived of by the same Congress leadership) he would have taken the country’s economy to newer heights. As Arun Jaitley said the ‘poor Sardar’ had only the ‘position’ but not the ‘power’.

The most ‘undisciplined leaders’ around Sonia and Rahul put obstacles in Manmohan’s plans. In fact, it is RaGa who needs tuitions from Manmohan more than Modi needed. Manmohan was opposed to the Congress politics over the issue of poverty but both the Mother and Son did not accept that.

RaGa seems to be following the same old Congress ‘disorder’ and ‘indiscipline’ in pushing his political agenda on the two planks of ‘pro-poor image’ and ‘creating fear psychosis amongst the minorities’. But, he forgets that these are outdated tricks. They will no longer fetch good days for his party. The 2014 elections have amply substantiated this myth.

The recent surveys conducted by various media houses show that even after one year the popularity graph of Narendra Modi is going upwards. Over 70 percent people are satisfied on the working of the Modi government. This is certainly a bad omen for the Congress and particularly for RaGa. It is he who should be more worried. If he failed to gauge the mood of the country, he is politically doomed. Certainly.