The land acquisition bill impasse: Will the states act now?

Marked with boycott by 13 state chief ministers of non-BJP ruled states and opposition voiced by Delhi and Bihar chief ministers to the highly debated Land Acquisition Bill the Narendra Modi government wanted to pass desperately, the bill may have to wait longer than expected for the smooth passage. 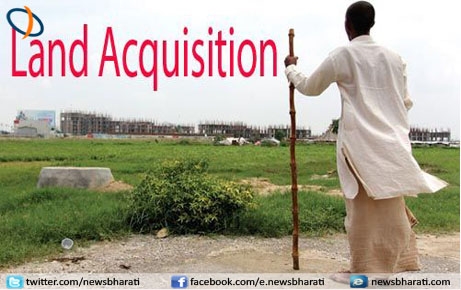 This bill is vital for a number of development plans of the Modi government. These plans include construction of dams, roads, railways, houses for poor and so on. These projects are the key to “Achhe Din” promised by the Modi government. But for the want of sufficient land, it is not possible to start work on these projects. Anyone can say this and no expert is required to explain this simple logical thing to the people.

But, ever since the Modi government made its intention to bring about this land legislation in the Lok Sabha, the entire Opposition rallied together to oppose it tooth and nail forcing the government to issue ordinance twice on the issue.

The media, which quintessentially hates Narendra Modi for whatever reasons best known to them, joined hands with the opposition and blurted day in and day out how draconian this land bill is and how the government would confiscate the land from the farmers, tribals and other landowners for a duck.

All this propaganda seems to have created an atmosphere against the land bill so much so that organizations that have ideological closeness with the BJP like Swadeshi Jagaran Manch (SJM), Bharatiya Mazdoor Sangh (BMS), Bharatiya Kisan Sangh (BKS), too voiced their concern and opposition to the passage of this bill, thus making the path of the progress and development more hazardous for the Narendra Modi government.

It was against this background that the meeting of NITI Ayog held on Wednesday needs to be seen and analyzed. The meeting was attended by the chief ministers of BJP-ruled states and of course, Delhi Chief Minister Arvind Kejriwal of AAP and Bihar Chief Minister Nitish Kumar of the JD(U). Both of them attended the meeting to register their strong opposition to the proposed land bill. Though the BJP governments supported the bill, they found themselves helpless on the issue.

This peculiar situation must have compelled the Finance Minister to come out with the suggestion that those states interested in development projects should frame their own laws and go ahead. “States cannot indefinitely wait for consensus” and that some of them want to enact their own land laws to boost development, and the centre would approve these laws.

The Congress as expected took serious objection to this statement from the Finance Minister. Even NCP leader Sharad Pawar had voiced his concern under the pretext that when the bill is pending before the parliamentary committee, what was the need to grant such a freedom to the states. The government should have waited for some more time, he said.

But Jaitley’s suggestion to the states is well in conformity of Article 254(2) of the Constitution that provides for the states to enact laws that does not conform to union laws on concurrent list subjects and land acquisition is one of them. Such laws are later approved by the President. Rajasthan followed this route in case of labor laws. Therefore, by throwing the ball in the court of the states the Union Government has shown its pragmatism.

Those states willing to undertake and expedite development projects and reforms can now go ahead with their own land acquisition proposals; get them approved by the centre and carry the state on the path of progress. Looking at the shrill of opposition voiced on this bill by the Congress and other Secular political parties and the Modi-hating media, this was the only alternative left for the centre to push for its development agenda.

Now the BJP–ruled states besides Andhra Pradesh and Telangana who were sympathetic to the land reform rule go ahead with the freedom granted to them and enact legislation to march on the path of development that would cover more than half of the country geographically.

These states have enough majorities to pass such legislation. There may be problem in states like Maharashtra where the BJP is short of absolute majority and depends on its political ally Shiv Sena which has already expressed its unwillingness to support the land acquisition bill. But that can be overcome with some persuasion.

Here the most pertinent question is whether the politicians who are in power in different states really want to develop their states or not? The Congress had been in power from the Centre down to panchayats for more than six decades. But where is development?

Even after six decades of independence the common rural folks have to traverse long distances for fetching a bucket of potable water; a farmer is still dependent on the errant rains; a sick has to be taken miles on foot to get proper medication; a young boy or a girl has to walk miles to reach the learning place and so on. These are very common parameters to measure the development status of the country and sadly, the Congress that ruled this country single-handedly for six decades has failed very miserably and should be held guilty of criminal negligence of its duty towards the people of India.

For the first time the people have elected a Prime Minister who talks of 125 crore Indians, who talks of “sab ka saath-sab ka vikaas” and intends to take steps in that direction. But here we have this opposition, mainly Congress which is ousted mercilessly by the electorates opposing this plans and projects just to make their presence feel in the public life.

The moot question is why people should entertain such meaningless opposition and stall the development plans that would ultimately benefit the masses and take the country to top echelon in the comity of nations?

The ball is now in the states’ court and at least the BJP-ruled states should come forward to show the way to the rest of the country in realizing the dream of “sab ka saath—sab ka vikaas”. Sooner the better.