New Delhi, July 7: The much talked about Saturday (July 4) iftar party hosted by Muslim Rashtriya Manch (MRM) for the diplomats and ambassadors of Islamic countries in India can best be described as the most historic and path-breaking event of the year. 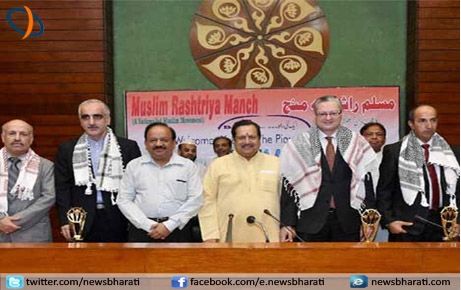 This has happened for the first time in the history of independent India that ambassadors and diplomats representing over a dozen Islamic nations participated in this event organized by a social reformist movement active amongst the Indian Muslims since last 13 years. I consider myself fortunate to be part of that great event which is going to cast its shadow on the near future.

No Muslim organization worth the salt ever thought of hosting such an iftar party, let alone organizing it in these many years. That’s why I described this as a path-breaking event. For, this is the beginning of the process of understanding the ideology and philosophy of Islam as a religion for peace, progress, and human welfare. The event also marked the crumbling of walls of artificial differences and misunderstanding deliberately erected by vested political interests (especially Congress and their secular cohorts in media) between the Muslim world and Hindu thought and action.

The Muslim Rashtriya Manch (MRM) has established itself with all positive credentials amongst the Indian Muslim community due to its activities mostly reformist in nature concentrating on education, saving the girl child and ameliorating the condition of women. It has not only provided an alternative rallying point to the Indian Muslims, but it has also forced the traditional Muslim leadership to come to the terms with the changing times and reality. The MRM support to Prime Minister Narendra Modi’s policies and programs has further consolidated its position amongst the followers of Islam in India.

The Media diversion: The Indian media has tried to paint this iftar party as a ploy of Rashtriya Swayamsevak Sangh (RSS), firmly rooted in Hindu philosophy, to woo Muslims to its fold. They even used it to instill fear amongst the Muslims about RSS. It also tried to dissuade the diplomats and ambassadors from participating in this event. But nothing of the sort happened.

Here I must tell the readers that the MRM was a brain child of the interaction the former RSS Sarasanghchalak K S Sudarshan had with some of the prominent Islamic scholars and religious personalities in 2002. At an Id-Milan program hosted by noted journalist Muzaffar Hussain, Sudarshan asked the Muslims as to why and how they consider themselves as ‘Minority’? Why don’t they feel that they are as much Indians as the Hindus? And if Islam stands for peace, then why there is so much violence in the name of religion? Whose responsibility is this to tell the world what real Islam is? 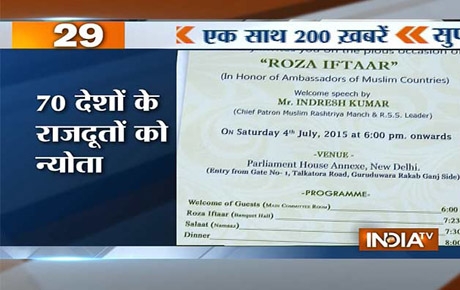 These questions put the process in motion and the debate and discussion finally took the shape of a non-political and reformist movement of MRM. Over the years the MRM has tried to raise the issue of ‘Hubbal Vatani’ i.e. patriotism, educating children, saving the girl child, respecting womanhood in the light of Prophet’s teaching “Heaven lies at the feet of the Mother”, and opposing terrorism and violence. The MRM has also raised issues like autonomy to Jammu & Kashmir, ban on cow slaughter and remembering martyrs who laid down their lives for the freedom of motherland.

The July 4 iftar party in New Delhi was yet another feather in its cap. 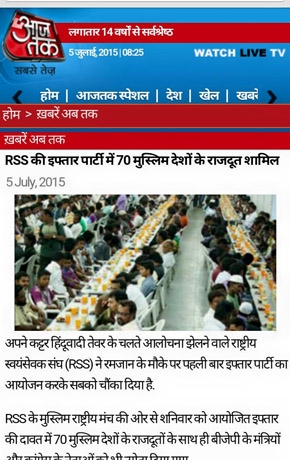 From the news quoted above, one thing becomes very clear that the media somehow tried its best to drag the RSS in this event completely and deliberately ignoring the reality. The reality was the event was organized by the Muslim Rashtriya Manch (MRM) which is not a front organization of RSS. It is true that Indresh Kumar, who is senior RSS leader and member of its national executive, is a Patron of the MRM, but that does not make it a front organization of the largest Hindu conglomerate. But the media wanted to sensationalize the issue by dragging RSS into it. 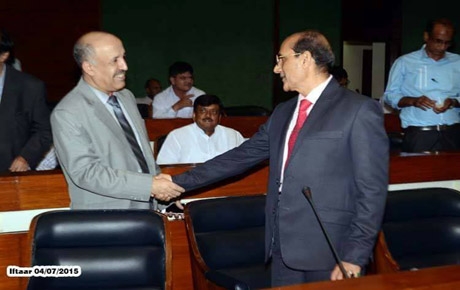 The MRM invited all the ambassadors and other diplomats of Muslim nations. The party was attended by 38 diplomats of 16 Islamic nations including Palestine, Afghanistan, Egypt, Yemen, Iran, Saudi Arabia, Iraq, and others. After the initial Tilawat-e-Quran by Hafiz Sabreen, and introductory remarks by Dr Imran Chaudhry, the Ambassador of Egypt addressed the gathering.

“I consider this as an honor to join you in this event”, Ambassador Hatim Talib began his address. “We are all Muslims coming from different regions but following the same religion. Islam is a religion of peace but today we Muslims are engaged in the bloodiest conflicts world over. It is therefore, our duty to explain to the world what Islam is. We have set up the panel of scholars and religious experts to dwell into this contrasting aspect and present a moderate view of Islam to the world. We look to India as the great model of democracy that can sustain other smaller democracies in the world,” the Egyptian envoy concluded.

Ambassadors of Yemen Jamal Abdullah and his Palestinian counterpart also thanked the MRM for organizing such event and inviting them to join the party.

Welcome speech by Indresh Kumar: Beginning his welcome address by explaining the objective of this iftar party, Indresh Kumar said, “This is the first dialogue of its kind. It is a social and cultural initiative completely away from the shadow of politics”. 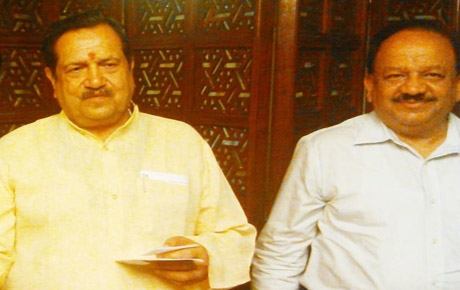 “We are not created for riots or hatred but for brotherhood and peace. We all come from the ONE ALMIGHTY GOD and as such we are brothers and sisters. Swami Vivekananda had established this relationship when he addressed the World Parliament of Religions in Chicago way back in 1893. Today I am addressing you all from that divine relationship”.

Indresh Kumar said Islam stood for brotherhood and peace. The Prophet had preached peace, brotherhood, harmony love, prosperity and secularism throughout his life. But the picture today is exactly opposite of what he taught. Anyone who does not follow the Prophet’s teachings and Quran is either not a Muslim or not practicing true Islam. Prophet Mohammad had never preached hatred, riots, blood-shedding, violence or criminality. Peace is a basic requirement for development.

Describing the iftar party as a World Message Program, Indresh Kumar said that the intention of today’s program was to disseminate the message of peace and brotherhood, love and harmony to the strife-torn, violence-hit and criminally suffering world and humanity. He said India has been giving to the world the eternal message of love, peace and happiness. Even this was acknowledged by the Prophet when he said whenever he felt dejected after migrating from Mecca to Media, he used say “I get the cool spiritual breeze from Hindustan”. This is our spiritual, cultural and social message to the world, he said.

He further said that the political message of today’s iftar party was a firm no to imperialism because imperialism was not the way of worshipping God. Instead we must spread friendly behavior with other countries and communities to make this world a beautiful place to live. “If we can become Sufi in the month of Ramzan, why can’t we be Sufi for the entire year, he asked.

He said that the MRM had given some important messages to the Muslims of India such as planting trees in the month of Ramzan to keep the world free from pollution, to plant the heavenly tree of Rihan in their houses and keep the surroundings healthy, to honor and respect the womanhood and allow the girl child to take birth and celebrate her birthday with great enthusiasm, do not interfere in other’s religions as the Prophet had said follow your own religion and do not interfere in others, don’t become fundamentalist but strive to be a true Muslim, love the motherland and do not indulge in violence. Quoting Hazrat Adam who said ‘Death of even one human being is death of the whole humanity’, Indresh Kumar advised the audience to stay away from the culture of gun and bombs. 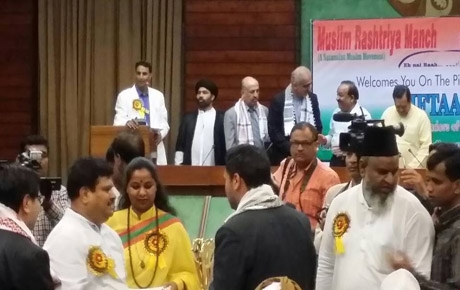 As a token of love and affection all the ambassadors were presented a memento and scarf at the hands of Indresh Kumar and Dr Harsh Vardhan. Prominent personalities were also presented with the mementos. This was followed by iftar and congregational namaz.

Besides many IAS and IPS officers attended the Iftar party. The hall was completely packed with around 300 Muslims from all over India.

In the informal interaction after the program, the general mood of the participants was appreciative of the party. The message disseminated by Indresh Kumar was well received by the envoys and intellectuals of Muslim communities. The media however, tried to bring in the issues to divert the attention of the community but could not succeed.

The message of this iftar party would go a long way in building bridges of brotherhood and friendship and peace all over the world. As such this was a historic and a path-breaking event.