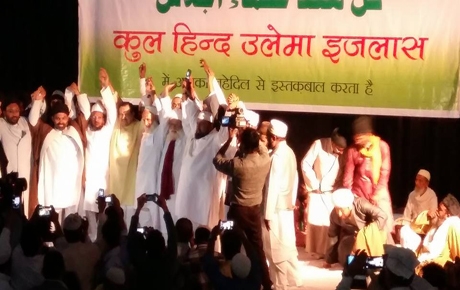 Lucknow, Aug 9: Writing a new script for peaceful co-existence, progress, brotherhood, harmony and non-violence the 1500 Mulsim clerics drawn from 25 states here on the eve of the 74th anniversary of “Quit India” movement, gave a clarion call to the countrymen to expel violence, injustice, terrorism and riots from the country forever.

The occasion was “Kul-Hind Ulema Ijlas” i.e. All India Ulema Confrence, organized for the first time at Ravindralaya here under the auspices of Muslim Rashtriya Manch (MRM), a social reform movement active since last 13 years among the Indian Muslim society.

This was a second such grand program after the July 4 Iftar Party hosted by MRM for the diplomats of Islamic nations in New Delhi. The Iftar party evoked a very positive response. Close on the heels of that goodwill, the MRM embarked upon this more ambitious program.

The congregation of these 1500 Muslim religious leaders was bound to evoke contradicting responses on the expected lines. To most this appeared as a ploy of the Rashtriya Swayamsevak Sangh (RSS), the predominantly Hindu organization, to woo the Muslims to its fold and seek their votes for the BJP. 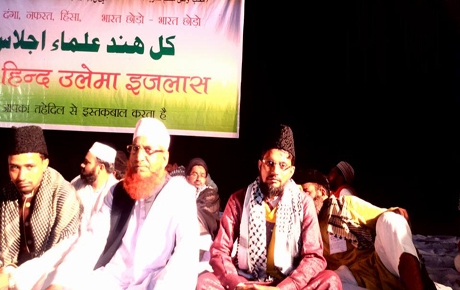 To others, this was an attempt to ‘misguide’ the Muslims. The activists of All India Muslim Majlis opposed this event and displayed ‘black flags’ to voice their protest. The All India Muslim Personal Law Board (AIMPLB), and Jamat Ulema-e-Hind stayed away from this event.

But barring this ‘minor’ opposition the event was a great success. Prominent amongst those Muslim clerics who participated in this ‘Kul Hind Ulema Ijlas’ were Maulana Suhaib Qasmi, President of All India Jamaat Ulema-e-Hind, State President Maulana Qumer Bukhari, Dr K Z Bukhari from Gaziabad, Maulana Kaukab Mujtba Abdi, Imam-e-Jumma of Hyderi Masjid of Karnataka Maulana Ibrahim Hussain Rizvi besides many others.

The Muslim clerics gave the slogan “दहशत, दंगा, नफरत, हिंसा- भारत छोडो, भारत छोडो” (Terrorism, Riot, Hatred, Violence—Quit India, Quit India) which reverberated throughout the nation emanating positive waves and message for the Muslims in particular and for all the Indians in general.

Those Ulemas who spoke their minds on this occasion decried the attempts to drive wedge between the Muslims and Hindus in the name of RSS and terrorism. They recalled how their forefathers had joined hands with the Hindus in driving the British out in 1857 and pledged similar joint efforts to drive away the menace of terrorism and bridge the gap between the Hindus and Muslims.

“Our mission is to spread the message of brotherhood and peaceful co-existence so that the country can march on the path of progress”, they said. They appealed to the Muslims to follow Kalam and discard Yakub, and prove that Kalam was their ideal and hero and not Yakub.

Imam of Hyderi Mosque of Karnataka Maulana Ibrahim said Muslims must understand that Muslims themselves for their present plight. He said it was not enough to wear a skull cap or offer namaaz for five times or have names like Jurekha or Ibrahim to be true Muslim. Those who indulge in terror acts bearing these names can never be a Muslim, he added.

Maulana Abdul Latif of Devband said that when Quran clearly advises Muslim to stay away from causing any damage to anyone, how true Muslim can become a terrorist and kill innocent people?

Abbas Ali Bohara said that now is the time for Muslims to show their solidarity and commitment towards the country. He said that Muslims belong to this country and they should not allow any insult to the religion for the mistakes of some of the members of the community.

The Ulemas also appealed the Muslims to go for modern education along with religious lessons. They should learn to love the country and follow the path of humanism. Reminding the gathering of the Quit India movement launched in 1942 against the British, they said that this conference sounded the bugle for terrorism, hatred, violence to Quit India. 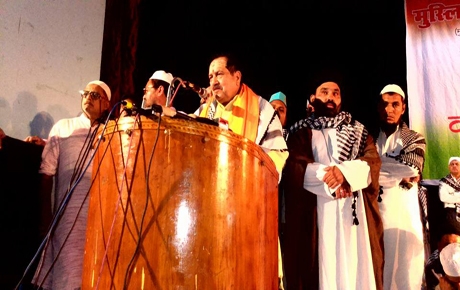 Indresh Kumar, the moving spirit behind this new movement of peace and brotherhood was conspicuous by his electrifying presence in the conference. Sporting vermilion on forehead and with his enchantingly smiling face he asked the Ulemas assembled to save them from being used as pawns in the electoral politics.

Stating that ulemas belonging to all the political ideologies and sects within the Islamic faith have participated in this jalsa, Indresh Kumar described this event as spiritual, historical and unique. 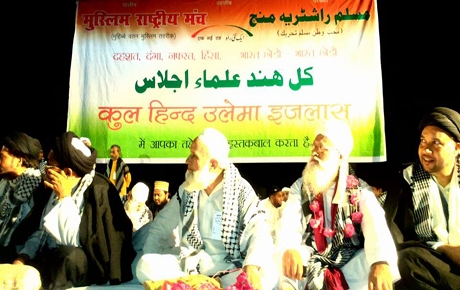 Congratulating the Muslims for foiling all the attempts to glorify dreaded terrorist Yakub Memon by handful of vested interests, Indresh Kumar appealed them to raise their voice against terrorism, violence and hatred and impress upon the Muslims the importance of education.

Quoting from the Prophet’s sayings that whenever he was in tense moments he used to receive cool, refreshing breath from Hind, Indresh Kumar urged the Muslims to tread the righteous path.

Asking the community to choose their role model and decide whether it would be a person like Bharat Ratna Dr APJ Abdul Kalam or terrorist Yakub Memon who was hanged on the day when Dr Kalam’s last rites were performed, Indresh Kumar appealed them to shun the path of violence and hatred in the name of religion. 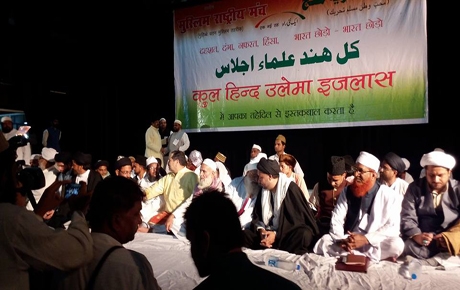 Addressing a press conference in Lucknow on the previous day, MRM National Convener Mohd. Afzal said that the MRM was working for eliminating hatred and ushering in an era of peace and progress. “We don’t want any violence in our country in the name of religion”, Afzal said adding that this sectarian violence was the main cause of our backwardness. Each riot has affected the poor Muslim in this land, he said.

Now we wanted to tell the nation and Prime Minister Narendra Modi that the time has come to work in unison for the development of this country. The backward Muslims could join the mainstream only when the atmosphere remained peaceful.