Of the five states that will be electing new assemblies this year Assam and West Bengal matter the most for the Bharatiya Janata Party (BJP) and more particularly for the leadership of Prime Minister Narendra Modi. These two states will be litmus test for the both.

Among the rest three states of Kerala, Tamil Nadu and Puducherry the BJP has little presence politically speaking. However, if the latest local body election results in Kerala are any indication, then the BJP seems to have somewhat better prospects in that southernmost state dominated by the Communists and Congress and their vote bank minority appeasement politics since Independence.

In Tamil Nadu and Puducherry it is a straight contest between the AIADMK of J Jayalalitha “Amma” and DMK of Karunanidhi where the BJP has least political influence.

But in the states of Assam and West Bengal BJP did exceedingly well in the 2014 Lok Sabha elections and the by-elections to the state assembly. Both the states have one problem in common and that is the unabated, unchecked and uncontrolled influx of Bangladeshi Muslims in their state. This is sure to dominate the political discourse during the electoral battle in these two states. The BJP has been raising its voice on this issue since long.

In 2001 census the percentage of Muslim population was 30.9. Almost all the districts of the state bordering Bangladesh have recorded a sharp rise in Muslim population and the 2011 census figures say it most explicitly. Unabated influx from across the border is one of the main reasons for this rise.

The 2001 census showed six districts of Assam—Barpeta, Dhubri, Karimganj, Goalpara, Hailakandi and Nagaon – with Muslim majority population. Now the 2011 census added three more districts of Darrang, Bongaigaon and Morigaon to this list taking the tally of Muslim dominated districts to nine with their population roughly ranging between 80 and 60 percent.

In political terms this means out of the total 126 assembly seats Assam now has 35 seats where these Bangladeshi immigrants are in a dominating position to elect their representatives. And this is the core issue of the 2016 Assam assembly elections!

Muslims have been an important political factor in Assam since the pre-independence days. Barrister M. A. Jinnah, father of Pakistan, had plans to include Assam in Pakistan on the eastern border. But he had to satisfy himself only on one district of Sylhet. However he did not lose heart. He had promised his then personal secretary Moinul Haq Choudhury that he would handover Assam to him on a silver platter.

Jinnah died but his vision kept inspiring Muslims and their leadership. The policy of appeasement adopted by the successive Congress governments in Assam continued to neglect, nay, at most of the time even encourage the influx of Muslims from Bangladesh into bordering districts of Assam as their solid vote banks. Now this has assumed dangerous dimensions threatening the very existence of indigenous Assamese Hindus in their very homeland!

This is endorsed by none other than one time ‘blue-eyed boy of Chief Minister Tarun Gogoi’ Himant Biswa Sarma, who had recently joined the BJP. In an interview to Indian Express dated February 3, 2016, Sarma without mincing words said “In Assam dal-roti will come second…it’s about people wanting to preserve their Indian Identity, their Assamese culture. The election will be divided on those lines”.

In the same interview Sarma, who is ridiculed by the Congressmen for deserting them, underlined the threat posed by these illegal entrants to ethnic Assamese people and culture.  He said, “…they are people who came from Bangladesh in different years. The fight is about those 34 seats where Bangladeshi immigrants who are now Indian citizens, are a majority. …This is our last chance. In this election Bangladeshi immigrants want their own chief minister too. Even the Supreme Court has said that within 20 years Assam will have majority of Bangaldeshi origin people”. 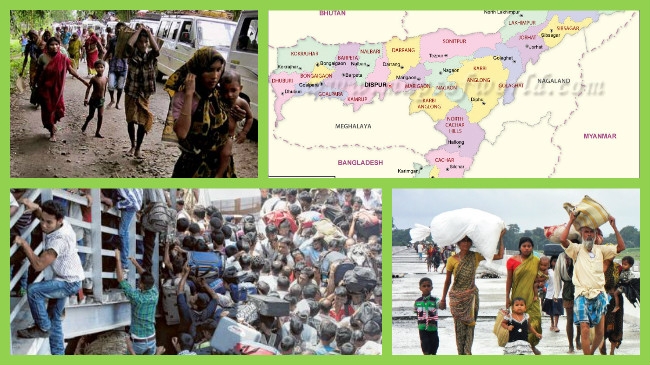 To understand the various dimensions of this problem of illegal immigration of Bangladeshi Muslims in Assam one needs to take a dip into the past. The British partitioned Bengal in 1905-06 and faced a nationwide massive popular revolt led by the triumvirate of Lal-Bal-Pal. This forced the British to nullify the partition. In the same year the Muslim League came into existence under the leadership of the Nabab of Dhaka. It encouraged Muslim influx into bordering districts of Assam and Bengal as a part of larger conspiracy.

Came 1947 and India achieved freedom not before it was truncated into Pakistan on its western and eastern borders. Creation of Pakistan did not stop the Muslims from illegally entering into Assam. Their influx continued then and later after creation of Bangladesh with the same intention and design envisaged by Jinnah.

Assam witnessed a massive popular upsurge during 1979-85 by the All Assam Student’s Union (AASU) against this illegal immigration. The people of the state joined the movement under the umbrella banner of All Assam Gana Sangram Parisahd (AAGSP). Together, the AASU and AAGSP mobilized massive public support to their cause.

The agitation culminated into Assam Accord signed by the then Prime Minister Rajiv Gandhi and leaders of AASU and AAGSP. It also brought the agitating leaders to power in the 1985 elections. But they also could not do anything concrete to resolve this complex issue of Muslim infiltration into Assam.

The Assam Accord agreed to grant citizenship to those Bangladeshi immigrants who had entered Assam between 1951 and 1971. This provision was challenged in the Supreme Court. The apex court had asked the government whether these people could be given the status of refugees instead of citizenship. This matter is now referred to a constitution bench. The Assam Accord (Clause 6) also ensured statutory protection to the ORIGINAL CITIZENS of Assam. But that part of the Accord was never implemented.

This non-compliance with this clause the parties like All India United Democratic Front (AIDUF) solely catering to the political interests of immigrant Muslims are getting votes and political support, according to Sarma.

The AIUDF headed by Badruddin Ajmal, a Bangladeshi immigrant who was granted Indian Citizenship, appeared on the political horizon in Assam in 2005 and progressed to become the main opposition party in the state. No wonder then this party is dreaming of having its own chief minister after the ensuing elections to safeguard and further the interests of Muslims in the state.

The vote share of the AIUDF has increased from 9 per cent in 2006 to 15 per cent in 2014 Lok Sabha elections. It has 18 MLAs in the incumbent assembly and it is the main opposition party. It has even left the AGP and BJP that always upheld the issues of indigenous Assamese people and their culture and raised the issue of illegal immigrants at all levels.

Today the political situation has changed in favour of leaders like Ajmal. He can claim that his party could win 35 seats out of 126 in Assam. This means the Assamese people have been reduced to minority in these constituencies. And this should be the matter of concern not only for the indigenous Assamese but for all the Indians.

History bears ample testimony to the fact that India had lost those parts where Hindus were reduced to minority. Pakistan and Bangladesh are the latest examples to substantiate this phenomenon. Assam may follow the suit if no concrete steps were initiated to undo the damage caused by this unabated infiltration. Years ago, the then census commissioner of Assam had warned about this exercise. His warning still holds good for the people, parties and their leaders to act upon.

As Sarma had said, the political contest in 2016 Assam  is between the BJP and AIUDF. The Congress is not at all in picture. The BJP will have to garner and mobilise the support of its tribal allies to ward off the threat of letting the state pass on to the AIUDF and save its ‘indigenous people’ from the impending existential threat.