The battle lines are drawn in all the four states of Assam, West Bengal, Tamil Nadu, and Kerala besides the union territory of Pududcherry going to elect their new assemblies in the electoral battle spanning over one and half months. However, out of these states Assam counts as most important one for the Bharatiya Janata Party (BJP) after the party’s debacle in Bihar and dismal performance in Delhi. 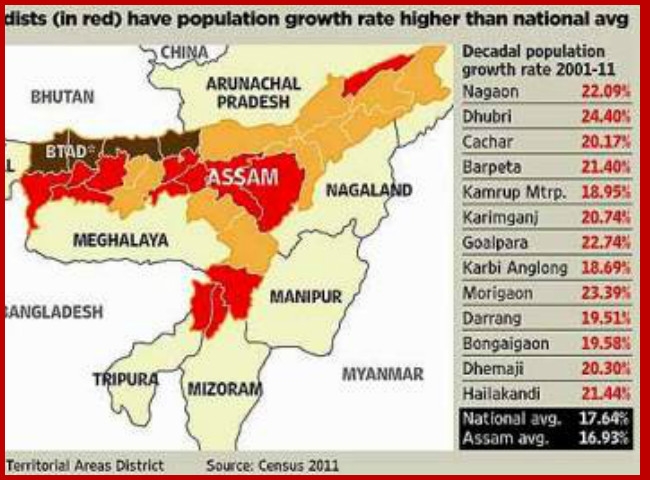 BJP has pinned its hopes on Assam and it has reasons to do so. For, the party had performed its best in the 2014 Lok Sabha elections bagging seven out of 14 seats and establishing its lead in a number of assembly constituencies. Besides, the people of the state are tired of Congress’ misrule of last 15 years and crave for a change.

Polling for the 126 assembly seats in Assam- the most sensitive state of India’s northeast, will be held in two phases. In the first phase voters in 65 constituencies will vote on April 4 to elect their representatives while polling for remaining 61 seats will be held a week later on April 11.

The present party position in the state assembly is as follows:

BJP’s ambitious plan: The BJP has chalked out an ambitious plan to capture power in the state. Looking at its present strength of 5, it seems well nigh impossible. But one can’t predict the mood of the most ‘mature’ Indian voter. The result might spring surprise for the political pundits too.

In a swift political move the BJP secured and sealed alliance with the two major parties – Asom Gana Parishad (AGP) and Bodo People’s Front (BPF). AGP has been the most formidable force in the state ever since its emergence in the wake of famous Assam Agitation of the late 70s and mid-80s. It even ruled the state twice.

Though the BJP had earlier entered into electoral alliance with AGP, it did not work. And the BJP had suffered badly with its tally going down to 5 from 11 in 2011. But in the Lok Sabha elections the state had given the best result to the BJP putting seven Lok Sabha seats in its basket.

Another major partner of the BJP is Bodo People’s Front (BPF) is a strong political contender in Bodo dominated areas of the state. Bodos are a force to reckon with the plains of Lower Assam and a major tribal group in Assam. Bodo language is accorded the status of Associate State Language and has rich literary treasure.

Besides the BJP has also entered into electoral pact with two smaller parties namely, Rabha Jatiya Aikya Manch and Tiwa Jatiya Aikya Manch, by conceding one seat each to them. This is surely going to help the BJP in expanding its base and increasing its acceptability in this border state. The BJP has signed the alliance with AGP giving it 24 seats and 16 to BPF out of 126. 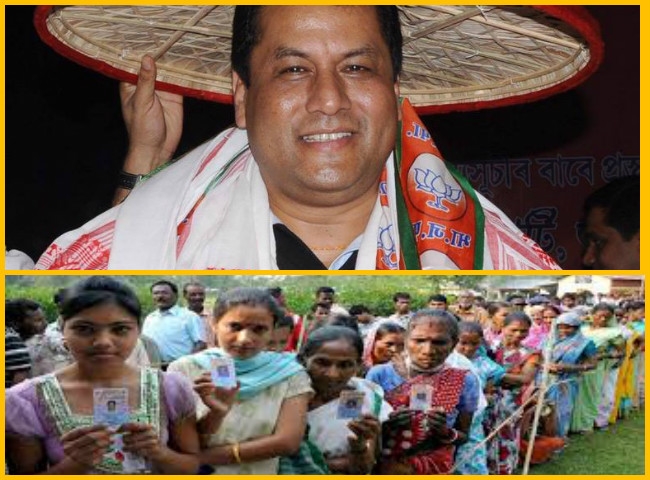 Upbeat mood in BJP: The party has taken a step ahead by declaring the first list of its candidates including that of party’s chief ministerial probable Sarbananda Sonowal who would be contesting from Majuli reserved constituency in Jorhat district.

Sonowal has been focusing on the river (Brahmaputra) island’s development since he was appointed a Union minister.

Majuli is India’s largest river island, mostly inhabited by the tribal Mishing community. The cultural hub of Assam, Majuli is the epicentre of Assam’s Vaishnavite movement.

The list was announced by J P Nadda after it was finalised by the party’s parliamentary board. Sonowal, a union minister, exuded confidence and satisfaction over the selection of candidates and said, “I am happy to contest from the constituency”.

“We had many challenges in finalising the list of candidates but it includes candidates from all communities... There are also 20 candidates whose ages are below 40 years,” said Himanta Biswa Sarma, convenor of BJP’s Assam election management committee.

The party has decided to field its Jorhat MP, Kamakhya Prasad Tasa, against Congress stalwart and chief minister Tarun Gogoi in Titabar constituency.

The Titabar assembly segment falls under the Jorhat parliamentary constituency. BJP’s decision to field its Jorhat MP against chief minister Tarun Gogoi could be a move to keep the Gogoi busy in his home constituency.

Most MLAs from other political parties (Congress and AGP) who had joined BJP in recent past were given party tickets to contest from their respective constituencies.

In six constituencies, it would go for ‘friendly contest’ with its allies AGP and BPF. The party would announce candidates for Nalbari and Kalaigaon constituency in the next three days. The electoral understanding with these parties will help BJP in consolidating the Hindu voters in Assam where the Muslims have crossed the 30 per cent mark.

Muslim voter tilting towards BJP?: The Muslims are mostly supporting the AIUDF of Badruddin Ajmal and the Congress party. But in the recent times, a section of indigenous Muslim voters are tilting towards the BJP thanks to the efforts of Muslim Rastriya Mancha and Jamate Ulema Hind leader Maulana Suhaib Qasmi. Maulan Qasmi and Indresh Kumar, Patron of MRM have addressed number of meetings of Muslims in Assam in the recent past turning them into BJP supporters.

The BJP Minority Morcha President of Assam Mominul Aowal has also cautioned the Muslim voters about the Congress and AIUDF plan to use them as tools for their politics under threat. “The aim and objectives of Chief Minister Tarun Gogoi and AIUDF president Badruddin Ajmal concerning the minorities are one and the same – to use the minorities of Assam as raw material for politics under pressure and threat,” he said.

Along with the minorities in the country, the minorities of Assam have also stood under the BJP flag showing solidarity with the party’s ‘sabka saath, sabka vikash’ slogan. The minority people in Assam have posed their faith on BJP’s chief ministerial candidate Sarbananda Sonowal. Only a BJP government in the State can solve all problems permanently.

The Assam Accord: Another important emotional issue which is very dear to AGP and people of Assam is the unfinished implementation of Assam Accord. The AGP could not accomplish it during their tenure and now hope that the BJP would do it. “BJP has assured us they will do whatever they can to implement the accord,” Atul Bora, AGP president said.

Justifying alliance with BJP he said, “It is the need of the hour to dislodge the Congress from power. That is why we decided to tie up with the BJP.”

Poll Statistics in BJP’s favour: A quick journey to the world of statistics will point out to the rising fortune of the BJP in Assam. From one percent vote in the 1985 assembly elections, the BJP has showed signs of ascendancy in 2006 assembly elections by capturing 12 per cent votes.

In the 2009 Lok Sabha polls, its share of vote jumped to 16 per cent and the party captured four seats. Although in the 2011 assembly elections it experienced a slight reversal of fortunes, the party came out with flying colours in the 2014 Lok Sabha election when it captured 36 per cent votes and seven out of the 14 Lok Sabha seats from Assam.

Observers of the northeastern politics think this time the BJP may lose some of its popularity among the Assamese Hindu voters due to its decision to grant the right of stay to immigrants who are minorities in Bangladesh and transfer of land under the Indo-Bangladesh Land Boundary Agreement. But these two factors may not be enough to shift the ground completely for the BJP.

AIDUF erodes Congress’ Muslim voter base: The appearance of the AIUDF on Assam’s political map has brought about a qualitative change. The Front got 39 per cent of the state’s Muslim votes in last polls while the Congress’ share came down to 40 per cent. 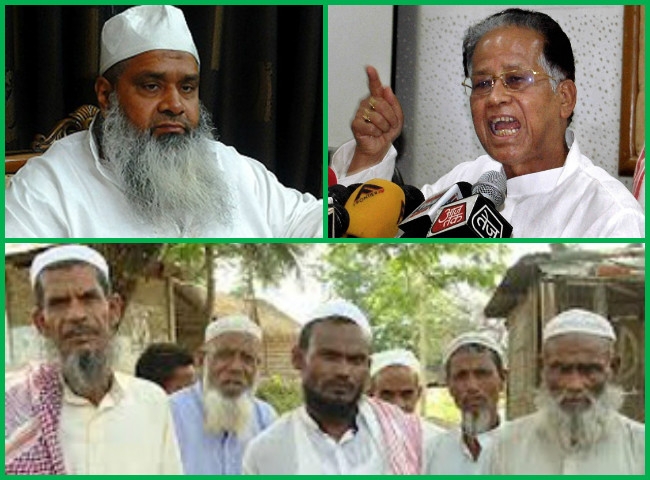 There has been a 10 per cent decline in the Congress’ overall vote share in Assam between the 2011 assembly elections and the 2014 Lok Sabha polls, and a major reason behind it is AIUDF’s poaching into Congress’s traditional vote bank of Muslims and the Bangladeshi immigrants. The AIUDF had won 18 seats in the 2011 assembly elections and led in 24 assembly segments in the 2014 parliamentary polls.

That the Congress and the AIUDF could not form an alliance is due to the fact that both are trying to outwit each other in order to become the principal face of the Muslim electorate. The AIUDF will contest in 60-odd seats and this does not augur well for the Congress.

The BJP’s small partners like the Bodo People’s Front (BPF) with 2.1 per cent votes will chip in for its success. The BPF had won 12 assembly seats in 2011 and the Bodos have significant presence in 50 other seats.

Arithmetical calculations favour the BJP-AGP-BPF combination. But it will be the voters who will have the last laugh. (With inputs from agencies)