PM blasts opposition by his wit and oratory

Prime Minister Narendra Modi’s speech in the Lok Sabha on Thursday was an excellent and brilliant piece of oratory. Blasting the Congress and Opposition parties for creating high drama in the parliament over non-issues and out of inferiority complex, the Prime Minster gave them the most wanted thrashing and a bitter pill by quoting from the former prime ministers right from Jawaharlal Nehru to Rahul Gandh’s father Rajiv Gandhi on various issues. 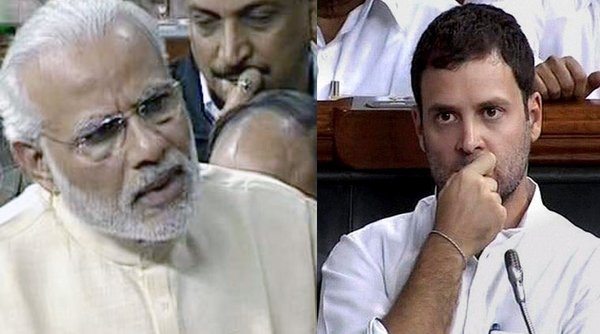 Taking a dig at Rahul Gandhi the Prime Minister very aptly said, “Some people learn with age but some don’t. Some people add years to their age, but their minds and understanding does not grow”, he said.

It may be recalled how Rahul Gandhi in his speech on Wednesday dared the Prime Minister not to run the country on his opinions. Singularly targeting Narenda Modi throughout his speech the Congress Vice-President said that the government had brought in a “fair and lovely” scheme to make the black money white besides slamming it on the issues of JNU and Rohit Vemula suicide case and also the policy towards Pakistan.

Rahul Gandhi accused the Prime Minister of not listening to anyone’s opinion including his cabinet colleagues. The Congress scion made fun of ambitious #MakeinIndia program ridiculing it as a ‘babbar sher’ ‘in which only clock and wheels are moving’ and no jobs created.

However, the Prime Minister in his mind blowing speech questioned the very intention of those who ridiculed #MakeinIndia. “This scheme is for the entire country. It is going to benefit the entire population. There may be some shortcomings and discrepancies. You should point to them and suggest remedial steps to correct those instead of criticizing it”, he quipped.

He said some members are growing older, but had not improved their maturity. He supported his observations with statements from his predecessors and statistics to show the differences during the UPA and NDA government.

Crediting Congress party for unfinished schemes which his government is now completing, Narendar Modi called upon the intellectuals to study and compare the two schemes. One Pradhan Mantri Gram Sadak Yojana started by Prime Minister Atal Bihari Vajpayee and MGNREGA, started by the UPA. They will know the truth, he added.

Modi said quoting former prime minister Rajiv Gandhi, “The Parliament is a forum where grievances are addressed, it is a place for questioning. The government has to defend itself and provide evidence; arguments in the forum don't spare anyone. But when the forum works only when it is allowed to function properly.

Prime Minister said referring to the criticism against him unleashed by the Congress and the Communists that in the last 14 years “I have learned to live with criticism and accusations thrown at me”. But he warned the Congress “tu tu main main karke hum media mein chhaa jaate hain (We take our bickering to the media). But our accountability is reducing”.

This is what Modi ji doing to Congress in Parliament... #NaMoInSansad pic.twitter.com/gZqFR8pbOy

Stating that Parliament is the only place where this can be rectified, Prime Minister asserted that the Opposition suffers from an inferiority complex. He said that his government is making up for UPA failures. He said that 'some members' were growing older, but had not improved in their maturity. He backed up his statements with statistics of UPA and NDA government.

Effectively countering the acerbic comments of Rahul Gandhi in the parliament Modi said that no one would deny that if Congress would have helped the poor in 60 years, the poor would not be still facing poverty and troubles.

Prime Minister Narendra Modi, started out his speech that appeared to be straightforward  however, he kept piling on jibes after jibes on the Congress as he quoted Rajiv Gandhi and Indira Gandhi and even Jawaharlal Nehru to drive his points home.