The Maoist menace: It’s time for firm action to finish the fight

The violent and deadly Maoist attack in Chhattisgarh’s Dantewada district on March 30 was yet another grim reminder of their earlier attacks. Amongst them are the killing of 75 security personnel on April 6, 2010, and the May 2013 dastardly attack in which senior Congress leaders of Chhattisgarh were eliminated. 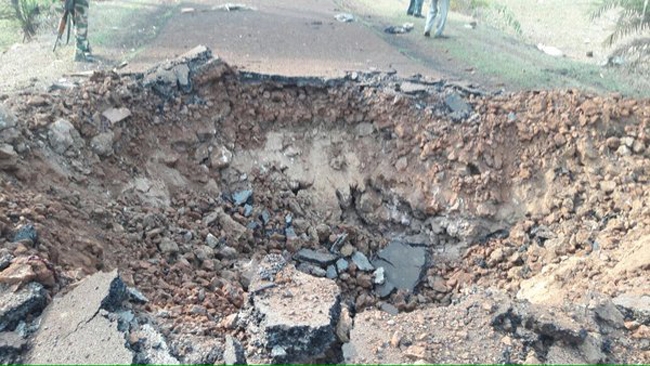 But there was another aspect. The Maoist would not have succeeded unless they had prior information on the movement of the troops. That helped them in laying the trap for these hapless soldiers and killing them before they could realise what happened to them. The leakage of information needs to be probed further.

The incident happened barely 24 hours after the security forces had gunned down three Maoists in Narainpur district on Tuesday. And the impact of the Wednesday explosion was so great that it not only tossed the Tata 407 on-tonner 500 meters above the ground but also created a 50-feet wide crater on the road! The bodies of the seven CRPF men travelling in that vehicle were strewn to the ground, shattered everywhere. Chhattisgarh Home Minister Ajay Chandrakar confirmed the killing of seven security men in the State Vidhan Sabha. 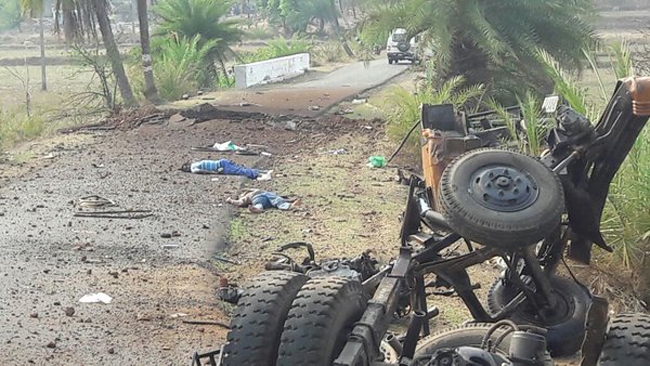 The blast occurred at 3.50 pm on Wednesday according to the state Anti-Naxal Operation wing of the State Police. The powerful IED blast proved that the Maoists were in possession of high quality of explosives and they have planted the IED long time before the incident on the road. This incident is considered to be one of the major offensives of the Maoists in this year.

The blast occurred not far away from a populated area and a school. The village of is located at a distance of 200 and there is a primary school located at 50 . Being so close to the populated area, the Road Opening Party did not accompany the ill-fated CRPF vehicle. Above all the jawans were all in mufti and without their weapons.

The Maoists were looking for arms to loot but disappointed they killed two of the surviving injured jawans by firing at them from a very close range. The remote of the IED was placed in a farmland some 200 away from the spot and the wires were well concealed under the earth. The Naxalites remained at the spot for over 10 minutes after carrying out the entire operation in a well-planned manner. The nearest police station of Kuakonda is located only at five km distance but they did not have any idea and intimation about the Naxalite’s plan to blow the CRPF vehicle.

The CRPF believed that the information on the movement of soldiers must have been leaked to the Maoists. They also suspected that 50-60 kg explosives could have been planted by the Naxals to blow the vehicle. The CRPF has already begun its investigation to identify the source that would have leaked the information.

Deccan Chronicle quoted CRPF DG K Durga Prasad as saying “it is certain that the information about their movement was leaked. Somewhere or at some this has happened. The boys were doing a surprise non-operational movement and hence were in mufti. We are looking into it”.

The DG reached Chhattisgarh late Thursday night to visit the blast site near Melawada village in the said district where Naxals blew off a Tata-709 mini-truck being used by the CRPF men to go from one camp to the other.

A senior CRPF official said that apart from a Court of Inquiry instituted into the incident, the force is also probing the role of a ‘suspect mole that can be from either from within the force or outside.’

DG Prasad, who rushed to the state from a tour of Maharashtra, said they are working on the leak theory due to a number of facts visible in the incident.

“The men were travelling in normal, non-force vehicle and were not going for any operation. There has been no attack on that road and hence no advance road opening party used to be deployed there. But, information got leaked about their movement. We are looking into all the aspects,” he said. 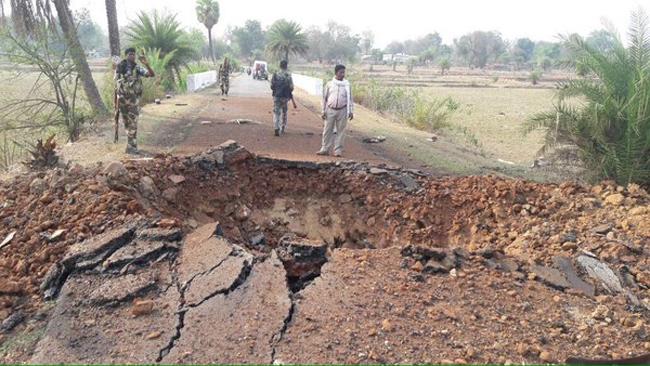 Officials in the intelligence wing of the force indicated that about 2-3 Naxals were present in the vicinity of the blast spot and are suspected to have ‘joined the wires’ to ignite the hidden improvised explosive device as soon as the vehicle went over it.

The force has called in a team of its bomb and IED experts from Pune to go into the details, the official said.

A Court of Inquiry has been ordered by the force into the incident and to find out under what circumstances the troops were travelling in a four-wheeler, banned for force personnel in these areas due to the threat of hidden IEDs, and why were they not carrying arms as it is mandatory for them while even moving for non-operational tasks.

They said the troops belonged to the 230th battalion of the force deployed in south Bastar area for anti-Naxal operations.

Maoists attacks targeting security personnel and civilians are not new to Chhattisgarh. There have been umpteen such events in the past. Yet, the state and central government and security forces have not been able to contain this menace totally. The Maoists have mostly occupied the dense forest and tribal populated areas of Chhattisgarh’s Bastar region and have developed a closely knit, most powerful local network. They have their own intelligence network too.

The following table gives an idea of the extent of the Naxalite violence and the damage it caused to human life and property in Chhattisgarh alone. A total of 2384 lives were lost in the violence since 2005 to March 27, including 877 security men and 716 civilians. 791 Naxalites were also killed in the counter-insurgency operations during this period.

The LWEs always targeted the security forces in their war against the state and the number of ranged between 40 and 180 in the given period. The Maoists killed in counter attacks or anti-Maoists operations ranged between 25 and 135 in the same period.

Most notable amongst the recent Naxal attacks is the one that took place on May 25, 2013, in the Darbha valley of Chhattisgarh. This dreaded attack killed 11 Congress leaders including veteran leader Vidya Charan Shukla who later succumbed to his injuries in a Gurgaon hospital.  Among the other 25 unfortunate victims Mahendra Karma, who launched the ‘Salwa-Judum’ against the Naxalites, State Congress Committee President Nand Kumar Patel, and his son Dinesh figured prominently. 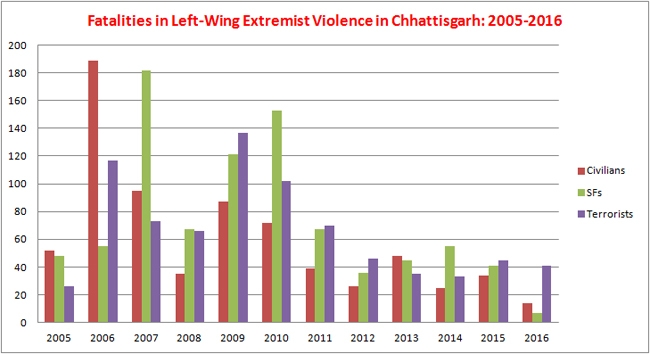 In another such dreaded attack, the Naxalites ambushed the security personnel in Dantewada district on April 6, 2010, killing as many as 75 security personnel. Following this incident, the government deployed 90 battalions of the central security force and one Indian Reserve Naga Battalion to flush out the Maoists ultras. The Naxal-affected states have formed a common unified command to conduct anti-Maoists operations.

In the current year, as many as 62 lives were lost in this LWE violence in Chhattisgarh up to March 27. The following table gives the details.

Over 12000 casualties in two decades:

However, the figures are more revealing on the national level. In the last two decades, the Left Wing Extremism has claimed over 12,000 lives including security force personnel. According to Home Ministry reports of the total 12,183 deaths caused by Naxal violence, 9471 were civilians while 2712 belonged to the state and central security apparatus. These deaths occurred in Naxal-infested areas of Andhra Pradesh, Bihar, Chhattisgarh, Jharkhand and Madhya Pradesh, Maharashtra, Odisha, Uttar Pradesh and West Bengal. 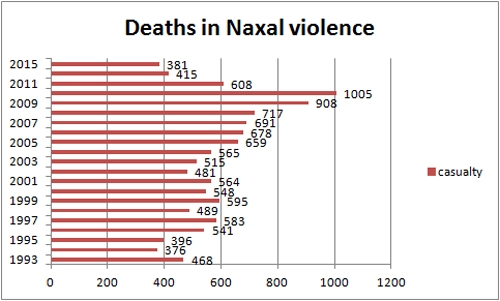 India is currently fighting the internal war on two fronts – the cross-border terrorism and the Left Wing Extremism (LWE). Dealing with LWE is more difficult because they have their intellectual supporters in the form of NGOs, Human Rights Organizations, and Left intellectuals and writers and journalists who continuously raise a hue and cry whenever the security forces take stringent action against these LWEs. They also use their international network to exert pressure on the government.

In dealing with cross-border terrorism the government is showing strong determination and action. Increased patrolling along the borders and swift action to eliminate the terrorists from across the border has resulted in the reduction in terrorist attacks. However, similar resolve seems to be lacking in dealing with the LWE in almost 9 states of our country.

It is normally looked at as a law and order problem. The law and order a state subject and therefore under the state jurisdiction. But this is not a mere law and order problem. This is against the state launched by those who believe in bullet over . And these forces need to be treated as enemies of the state and not just simple criminals. The central government must think in this direction and give the states all help and assistance to deal firmly with this LWE menace to ensure peace and development of the state. It’s time to end this fight forever.