New Delhi, Apr 28: The Indian (Anti?) National Congress led by its Italian President finds itself caught between the devil and the deep sea over the AgustaWestland chopper deal. An Italian high court has named Sonia Gandhi, Manmohan Singh, Ahmed Patel, Oscar Fernandez in its recent judgement on the helicopter deal and the bribe involved in it, thus giving the ruling BJP an important issue to launch its attack against the Congress and its leaders. 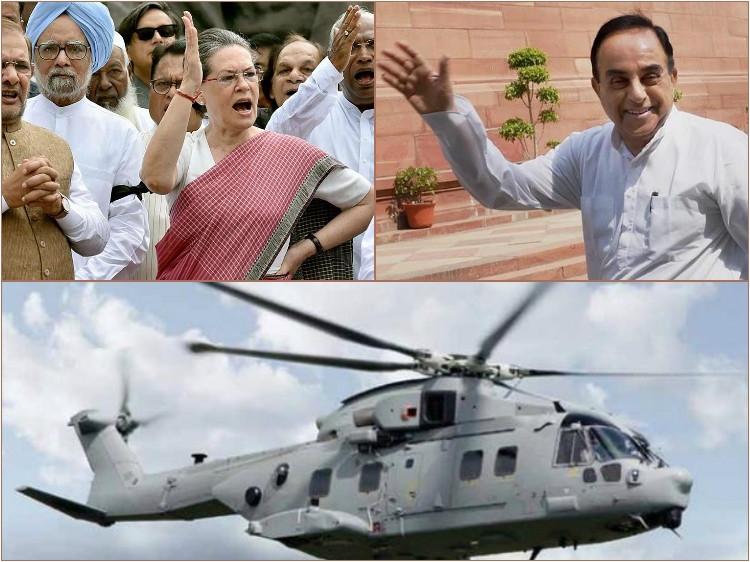 It may be mentioned that India had signed a purchase deal with AgustaWestlands for the supply of 12 AW101 helicopters in 2010. These choppers were to be used for the President, Prime Minister, and other VVIPs. That time this deal was worth Rs 3565 crore.

The Italian High Court has found prima facie that bribes were paid in this deal and the court had punished those who offered the bribe. If the bribe were paid then someone must have received it. Who is that recipient is the important question. And the mention of the names of senior Congress leaders the needle of suspicion in this regard certainly points to them.

And this is exactly the catch 22 situation the Congress finds itself at present.

Assuming an aggressive posture as BJP’s Dr. Subramaniam Swamy mentioned Sonia Gandhi’s name in the Rajya Sabha in his maiden speech, the Congressmen were claiming innocence on the pretext that they had cancelled the AgustaWestland chopper contract. But here again, they faced a direct question from Defence Minister Manohar Parrikar who challenged them to show the signed letter cancelling the contract. The defensive Congress leaders had tried to save their faces by saying that the ‘process of cancellation was initiated during their period but meanwhile the elections came and their party was ousted from the government and therefore, could not complete the process’.

The Italian high court has named ‘Signora Gandhi’ at whose insistence this deal was struck pointing straight to Sonia Gandhi and her confidante and political secretary Ahmed Patel for allegedly receiving kickbacks in the chopper deal.

The Milan Court of Appeals, equivalent to High Court in India in its judicial status, has on April 25, 2016, was all in the news for naming Sonia Gandhi, and other senior Congress leaders were targeted by the Italian company through its Indian operations head Peter Hulett to influence them in favour of the deal. The names besides Sonia, Manmohan and Ahmed Patel mentioned by the Italian court included, those of Oscar Fernandez, the then National Security Advisor M K Narayanan and Sonia’s aide Vinay Singh. Former Air Chief Marshal S P Tyagi’s name also figures in the deal. The middlemen in this deal supposed to have paid a bribe of Rs 360 crore to political leaders and bureaucrats to get the deal through.

The Italian court sentenced Giuseppe Orsi, the CEO of Finmeccanica, on charges of bribery. The Italian investigators recovered a document from Orsi dated March 15, 2008, thus exposing that the company had begun its machinations during the rule of UPA I, though the contract was signed in February 2010 when the UPA-II was in the office.

This document contained the ‘budget’ the agents of AW had prepared for the kickbacks and also allegedly the names of the Indian recipients.

Orsi was found guilty of corruption by the Italian court on different counts including money laundering. He is now serving the jail term for four and half years. His accomplice and former head of AW, Bruno Spagnolini is also sentenced to four years’ imprisonment.

Overthrowing the lower court’s judgement that could not prove that bribe was paid to Indian politicians, the Italian High Court upheld the conviction of Orsi and Spagnolini and sent them to jail.

Following their arrest in Italy, the UPA II government scrapped the helicopter deal and registered an FIR against Air Chief Marshall SP Tyagi. The Italian High Court has established that bribe has been paid in this deal and sentenced those who paid the kickbacks. But the question remains to be answered that who were the recipients.

And the BJP has exactly put the Congress on the defensive over this. Since the deal was struck during the UPA regime, they Congress must give the information of the beneficiary of these kickbacks. Instead they are asking the Modi Government as to why it invited the ‘blacklisted’ Finmeccanica to participate in ‘Make in India’ program?

Nonetheless, the issue has heated the political atmosphere in the country. But the answer still remains a distant dream.

February 2010: The Ministry of Defence strikes a deal with AugustWestland for supply of 12 AW101 helicopters at Rs 3726.96 crore

Feb 12, 2013: CEO of Finmeccanica Giuseppe Orsi was arrested in Italy on corruption charges.

Feb 25, 2013: CBI interrogated former Air Chief Marshal S P Tyagi and his cousin in connection with corruption in the chopper deal as his name was mentioned in Italian court papers.

Feb 27, 2013: A joint parliamentary committee (JPC) was formed to probe this case.

January 2014: UPA II cancels the agreement with AugustWestland on the grounds that the company had breached the agreement.

Jan 11, 2014: For the first time, the prosecution lawyer in Italy enquired suspected middleman Ralf Hashk about initials ‘AP’ whether they indicated to Ahmed Patel?

September 2014: Enforcement Directorate (ED) arrensts Chandigarh-based businessman Gautam Khetan in this connection. This was the first arrest in this case.

October 2014: Italian trial court acquitted Orsi and ex-head of AgustaWestland Bruno Spagnolini from the corruption charges but sentenced them to two years’ jail term on charges of presenting forged bills.

April 7, 2016: The Milan Court in Italy rejected the lower court verdict and endorsed that bribes were paid in Indian chopper deal with Finmecanicca. The court sights names of Congress President Sonia Gandhi, former PM Manmohan Singh, Ahmed Patel and others. But the court mentioned that there was no proof to justify that they were paid the bribes.