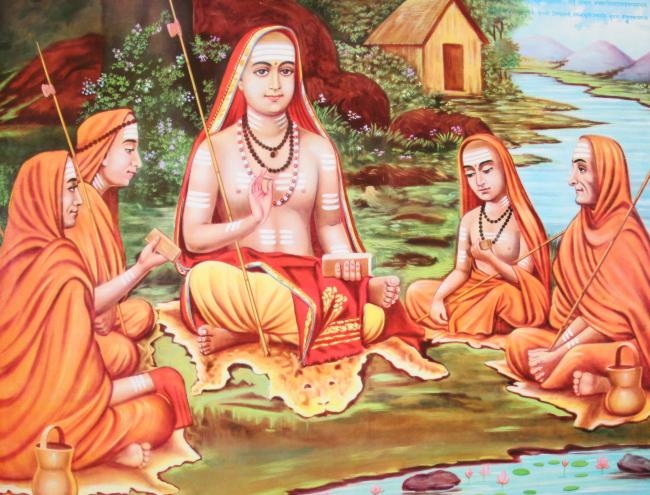 Bharat is the land of great personalities since the hoary past. This is the most preferred land by the Almighty who appeared here in his ten incarnations at different times to save the humanity from impending dangers and to guide them on to the righteous path of salvation. Each incarnation also tells us the story of the evolution of life on this earth from water to land and from primitive to well-advanced stages.

Apart from incarnations, Bharat produced many a great preacher and religious gurus who interpreted religious texts simplifying them for the benefit of the laity and helping them in emancipation while doing all the chorus of the mundane world. Whenever there was chaos, anarchy, and confusion, such personalities appeared to provide the most needed light to show the correct path.

Adi Shankaracharya was one amongst such luminaries who not only exposed the follies of the then religious bigots and fake gurus but also united the nation and its people by setting up four mutts in all the four directions of the country. He introduced the worship of ‘Panchayatan’ i.e. five main gods and goddesses for the common people to emphasize the concept of ‘Unity in Diversity’ in the divine scheme.

Prior to Shankaracharya’s birth, Bharat was passing through a stage of chaos due to the presence of various sects and sub-sects. There were as many as 72 sects including the Charvakas who believed only in the mundane world, the Lokayathikas, Kapalikas, Shaktas, Sankhyas, Buddhas and Madhyamikas. All these sects were constantly at loggerheads with each other trying to establish their superiority. The entire country that was illuminated by men of knowledge plunged into the darkness of superstitions and bigotry.

Born in Kaladi in Kerala, Adi Shankaracharya is credited with re-establishing the supremacy of Vedic Dharma in Bharat with its full shining glory. The forces opposed to Vedic Dharma at that time were more powerful. But Shankara decided to take on them single-handedly from the front and won the battle by defeating all such forces with his knowledge, oratory and debating skills and restored the Vedic Dharma and Advaita Vedanta to their pristine glory and purity.

Born in a Nambudiri Brahmin family in 788 A.D, Shankara renounced the mundane world at the tender age of eight. He went in search of his guru Swami Govindapada Acharya in the Himalayas. Shankara introduced him to his guru in a modest and humble way and requested him to accept him as the disciple and initiate him formally into the holy order of Sannyasa. Swami Govindapadacharya was very pleased and accepted him as his disciple. He taught him Advaita philosophy. He then went to Kashi following the direction of his guru and wrote his commentaries on ‘Brahmasutras’, Upanishads, and the Gita.

Shankaracharya then started preaching his philosophy. He toured the entire country meeting leaders of different sects and schools of thought, debating with them and convincing them by his unassailable arguments and logic. Thus, he succeeded in establishing the supremacy of truth of the Dharma that he expounded in his commentaries. He challenged the learned men to debate and argued with them and converted them to his opinions and views. The most prominent amongst them who converted to Shankara’s school was Bhatta Bhaskara, Dandi, and Mayura, Harsha, Abhinavagupta, Murari Misra, Udayanacharya, Dharmagupta, Kumarila and Prabhakara.

At Mahishmati, there lived a Sanskrit scholar of the day Mandan Mishra. He was a for believer of Karma Mimansa and bored intense hatred for the sannyasins. Shankara happened to visit him when he was performing shraddha. Mandan Mishra was furious at the sight of this young Sannyasin. The Brahmins who were present for the shraddha pacified Mandan Mishra who later agreed to have a debate with Shankara. The debate began on the appointed day with Mandan Mishra’s spouse Bharati as the judge. Bharati was also a scholar and possessed erudite scholarship. It was agreed beforehand that whosoever is defeated in the debate should accept the supremacy of the victorious and follow his path. Thus, Shankara agreed to become a householder and marry while Mandan Mishra agreed to become a Sannyasin and lead a mendicant’s life.

Mandan Mishra could not stand in comparison to Shankara’s style of arguments and logic and accepted his defeat. Now his better half jumped into the fray challenging Shankara to debate with her. She asked some intimate questions related to Kama Shastra. However, Shankara sought one month’s time to give her satisfactory replies to them. Bharati generously agreed. Shankara then separated his astral body from his physical one by means of his yogic powers and entered the body of a dead king. He asked his disciples to guard his physical body carefully.

As the king came back alive, everyone rejoiced. Shankara then learned the secrets of Kama Shastra acquiring all the experiences of love with his queens. But somehow, they felt that this King was not the same person. So the queens sent their spies to locate the body of Shankara and destroy it so that the king could stay with them. But, Shankara’s disciples brought him to his senses and reminded him of his mission. Shankara left the body of the king, entered his own and went to Bharati to have a debate with her. She too was ultimately defeated and accepted Sannyas. Shankara initiated both Mandan Mishra and his wife into the order of Sannyas re-christening him as “Sureshwaracharya”. He was the first to be appointed as Acharya of Sringeri Mutt. Bharati too accompanied Shankara to Sringeri.

Sankara, by vanquishing all the religious opponents of his day -- and they belonged to no less than seventy-two different schools -- and establishing the superiority of the Vedic Dharma, had become the Jagadguru of all.

The special character of Bharat owes its existence even today to the rejuvenation of Vedic Dharma by Adi Shankaracharya. He occupies an important position as the exponent of Vedic Dharama and Vedanta philosophy. The four mutts located at all the four corners of the country endorse his vision of geo-cultural unity of Bharat centuries ago. In his absence Bharat would have burnt in the devastating fire of religious intolerance of the successive invaders. The lessons Shankara taught the people of Bharat are still pulsating in their body and soul to make them true aspirant and a proud Hindu. Though he died young, he left an invaluable treasure of spiritual knowledge for future generations.