Nagpur, June 6: The Pak envoy was speaking at a seminar on Indo-Pak relations titled “Dialogue without Borders” on Friday at Hotel Centre Point here. The program was organised by Lokmat Knowledge Forum, a project of Lokmat group of newspapers.

Basit, who was on his maiden visit to this city of modern rejuvenation of India, narrated how Pakistan suffered on account of the intervention of the then USSR in Afghanistan in 1979. “Here in India, you cannot imagine the agony Pakistan underwent through after the instability post-1979 Today we have three million Afghan refugees putting our economy under great stress. Pakistan is rich in resources but it needs to address the issues related to Afghanistan while those with India can wait”, he said.

“Our first priority is to bring peace and stability in Afghanistan”, he repeated. He said that many Indians were unaware that Soviet occupation of Afghanistan, Taliban regime, and also the 9/11 has left Afghanistan impoverished. Even today, three million Afghan refugees were staying in refugee camps and hospitals in Pakistan.

This has proved to be a big hurdle for economic progress of Pakistan and unless the Mohajir (refugees) issue is resolved, it would not be able to restore peace with its neighbours like Iran, Afghanistan, India and China, Basit said.

Basit preferred continuance of dialogue between India and Pakistan and said that with the visit of Indian Minister of External Affairs Sushma Swaraj the ground was prepared for talks. But incidents like terrorist attacks vitiate the atmosphere and directly affect the dialogue process, he explained. He also cited his meetings with Hurriyat leaders and Pathankot terror attack that hampered the bilateral talks.

Stressing that war is not the solution for lasting peace, the Pak envoy said that we had fought four wars in the past but that did not resolve the issues like J & K, Sir Creek and terrorism. On the other hand, the mistrust between the two neighbours has increased, he added. “We will have to take some ‘baby steps’ to take the dialogue process further to its logical conclusion”, he said.

He said steps like increasing the number of visas for our citizens or increasing air connectivity or increasing cultural exchanges and allowing Pakistani television channels and films in India. “We must change the ‘zero sum gain’ to ‘positive sum gain’ between the two nations.

Basit was all praise for Prime Minister Narendra Modi for inviting Pak PM Nawaz Sharif to attend his swearing-in ceremony in May 2014. “Our PM was under great pressure at home to accept that invitation, but he came and attended the ceremony”. Basit also referred to the meeting of both the Prime Ministers in Ufa. These steps showed that both the leaders are genuinely interested in ushering an era of peace and stability in the region, he asserted.

The Pak High Commissioner reiterated that terrorism has no place in Pakistan and “we will not allow such a philosophy to grow”. “Do not jump to premature conclusions about Pathankot. This is not the matter to be discussed publically”, he said.

“Pathankot happened after Modi’s visit to Pakistan. Public opinion in India will never accept any dialogue after that. But emotions will not solve the problems. The common ground of interest would help solve the problem.

Emphasising that Pakistan has zero tolerance for terrorism and it was committed to not allowing the use of Pakistani land for terrorist activities, Basit also said that first, India and Pakistan must set peace as their common destination and start working towards it in a unified manner. “This will keep the hope of restoring bilateral peace,” he also added. 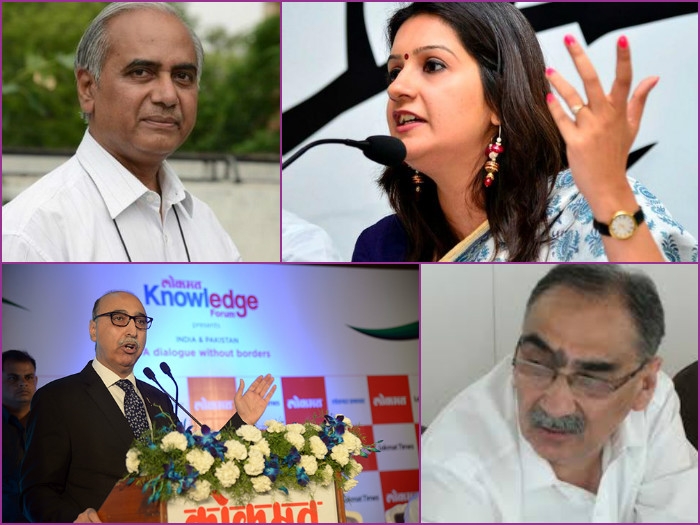 The Pursuit of interests, not emotions, to improve ties - Vivek Katju: The former Ambassador to Afghanistan, Myanmar and Thailand, Vivek Katju in his speech said that emotions and sentiments have a role in human life bit countries determine their ties on the basis of national interests. They identify interests and then expand their scope.

Pakistan and India may be sharing common traditions and culture, but when it comes to bilateral relations, national interests get priority, he said.

He also pointed out that though India and China have disputes on several issues, they have made progress on several mutual issues of trade, investments, etc. The same thing should happen in the case of Pakistan also, Katju emphasised.

He said that the Lahore visit of Prime Minister Narendra Modi was a ‘bold and imaginative move’ but soon after that Pathankot terror attack took place. This derailed all the positive gains of that move. This endorsed the fact that ground realities will not allow smooth talks between the two neighbours, Katju said.

Dialogue to boost Indo-Pak economies - Seshadri Chari: The former Editor of ‘Organiser’ and senior BJP functionary Seshadri Chari said that all the Indian Prime Ministers took the initiative to have good neighbourly relations with Pakistan. Even Prime Minister Vajpayee had visited Pakistan. Nawaz Sharif came to Delhi to participate in the swearing-in ceremony of Narendra Modi.

We must continue to talk to each other but there is always a problem as to with whom you should talk. There is a government, an army and even the non-state actors in Pakistan, he said.

He observed that the new generation in both the countries wanted to move on the way to progress, peace and stability. And to achieve this there is no alternative but to continue the bilateral talks, he added.

He also said that even though Pakistani shops mostly sell Indian goods, Pakistan has not given Most Favoured Nation status to India. In spite of that, India was ready to talk to Pakistan on all disputed issues with the hope that one day, mistrust between the two countries would come to an end, Chari said.

However, lack of political will prevents this from happening. That is why we move five steps forward and 10 steps backwards, she pointed out.

There has been bitter apprehension between the two nations and confidence building measures (CBM) have yielded nothing. There is no common ground for dialogue between India and Pakistan and if we look at both sides of the border, both people have different ideas, she informed.

The deep narrative cannot make the narrative justified, but explicable, she said.

If India and Pakistan can exploit links like the bilateral trade to advance dialogue, a win-win situation would be created for both the nations, she said.

“As a youngster, I hope we do not become slaves of the history but create a new chapter in future,” she said.

He said that people in both countries want to know about each other, but in the absence of media interaction, the people to people contact is not established. He, however, expressed satisfaction that Pakistani newspapers like Dawn were available on the internet, but not in hard copies in India.

Desai also said that youths in both countries do not want to know what happened in history, but want both nations to progress and for that, dialogue must go on uninterrupted, he emphasised.

At the outset, in his welcome speech, Managing Director of Lokmat Media, Devendra Darda said hostilities between India and Pakistan and terrorist activities have pushed both countries to a proxy war like situation and that is why Lokmat Group decided to take the initiative to organise this seminar.