The universal message of Sikh tenets 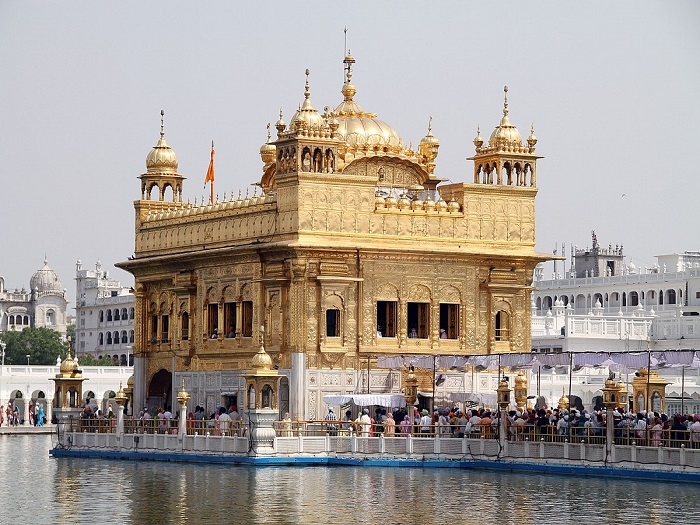 The greatness of the Indian culture lies in the fact that it retained those values which are essential for spiritual as well as temporal needs of humanity and kept on abandoning, periodically, those practices which had lost their relevance according to the imperatives of the time and place.

Some of the practices conceptualised by the Sikh Gurus contributed extensively in reinforcing human values in the society and have become inseparable part of the great Indian culture. First Sikh Guru, Shri Guru Nanak Dev is considered to be a social reformer of highest order and his teachings have universal message and can be considered as endowment of Indian culture to the rest of humanity.

Based upon Guru Nanak Dev’s teachings, subsequent Sikh Gurus further elaborated on the human values of them and institutionalised the same. Third Sikh Guru Shri Guru Amardas perpetuated the practice of Langar (Community Meal) and since then it has become famous by the name of Guru ka Langar.

It is important to learn about the social and political conditions prevalent at the time of Shri Guru Amardas. The society was content with the fulfilment of the three basic needs of food, clothing and shelter. However, with the vagaries of weather having more impact on agricultural yields, round the year food supplies to the masses were not ensured. One year it could be drought which used to play havoc with the agrarian output and another year it was floods which used to ruin the entire year’s hard work of the farmers.

Understandably, there were no food corporations, crop insurance schemes and government aids in those days. Even the political system was hostile to the population of this country. The contemporary Mughal Rulers were concerned about collecting revenues by way of Lagans from the farmers and in case of crop failures never displayed the generosity of compensating the subjects. Sikh Gurus conceptualised the tradition of Langar to fend off nature’s vagaries and ruler’s apathy all together.

The concept of Langar had two parts; the first one consisted of the givers. Those farmers and traders who were fortunate enough to have surplus food grains, used to donate the same to Gurudwara where Langar was organised twice a day. The second part was of the people who did not have enough food for their daily needs and they used to congregate at Gurudwaras to eat twice a day. The food served at Langars was and is still known as Prasad.

The pious message implicit in the institution of Langar is very important for humanity and should be incorporated as part of way of life. Normally as is human trait, the donor or benefactor gets filled with feeling of vanity and conceit while giving something to fellow humans but when somebody gives something at doorstep of his lord, he considers it as giving back to the almighty from whom he has taken everything.

Similarly, while taking favours from others like asking for free meals, one is filled with a feeling of inferiority complex but when food is eaten at a pious place like Gurudwara or temple it is called Parsad and one considers himself as fortunate for eating at God’s doorstep. 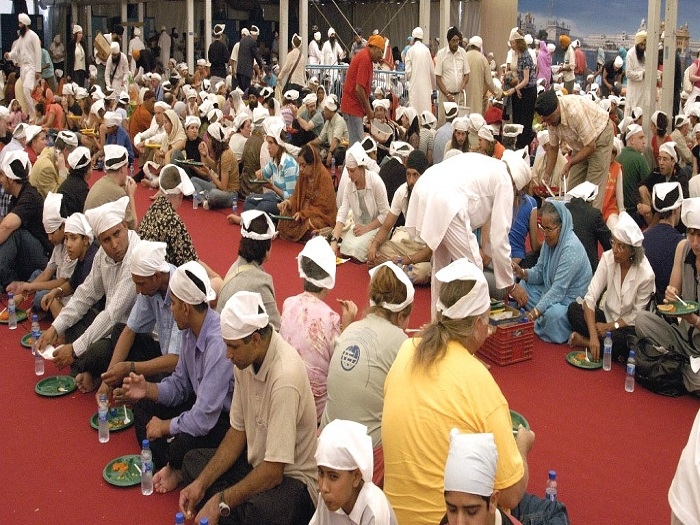 The tradition of Langar can be the best example for the principle of trusteeship among the humanity. The phenomenon of sharing and caring is inherent in the institution of Langar. This tradition of Indian culture can be considered as the best way of life for the global community. The people world over have experimented with the unnatural concept of communism in which state tries to enforce forcible distribution of resources and most of the countries, with few exceptions of dictatorial regimes, have washed their hands off this failed experiment.

Similarly, with the inherent lacunae in capitalism, there looms the danger of extreme deprivation for the poor of the world whereas most of the resources are being cornered by the rich. Therefore, the most ideal way of life for humanity is the principle of trusteeship. The best illustration of trusteeship is the institution of Langar perpetuated by the great Sikh Gurus in Indian Culture.

Sikh Gurus not only started tradition of Langar in Gurudwaras, they architectured the holy places in such a way that some parts of the precincts are used for providing temporary accommodation to travellers. In bygone years when there were highly scarce means of transportation available and it took long time to commute from one place to another, Gurdwaras used to provide food, shelter and spiritual succour to the tired travellers. A very tall saffron colour flag known as Nishan Sahib keeps on fluttering outside the Gurudwaras which is visible from long distance and acts as a beacon for travellers looking for a place for not only to pay obeisance to the almighty but to take Prasad as a meal also.

This pious tradition of Langar is followed in all the Gurudwaras, globally. Truthfully, this is the heritage of trusteeship which has become part and parcel of the great Indian culture and reinforces the thought that everything in the world has been bestowed upon the humanity by God and by serving mankind, we are paying tribute to the creator.

Another great principle perpetuated by the Sikh Gurus is the tradition of ‘Sangat and Pangat’. The word ‘Sangat’ means the entire society in general and the congregation in Gurudwaras in particular. And the word ‘Pangat’ means sitting in a row especially while taking meals. It is highly important to understand the principle of ‘Sangat and Pangat’ not only in terms of the period it was institutionalised but in terms of its universal appeal and timeless value also.

We have ancient scriptures throwing light on the fact that caste never used to be related with the birth but was reflective of the occupations people were associated with. However, with the passage of time, no one knows since when, caste became associated with birth. A person born in a Brahmin clan had to be known as a Brahmin irrespective of his profession and another born in a Shudra household, irrespective of his qualities of either educating others or warrior capabilities, had to be identified as Shudra only. 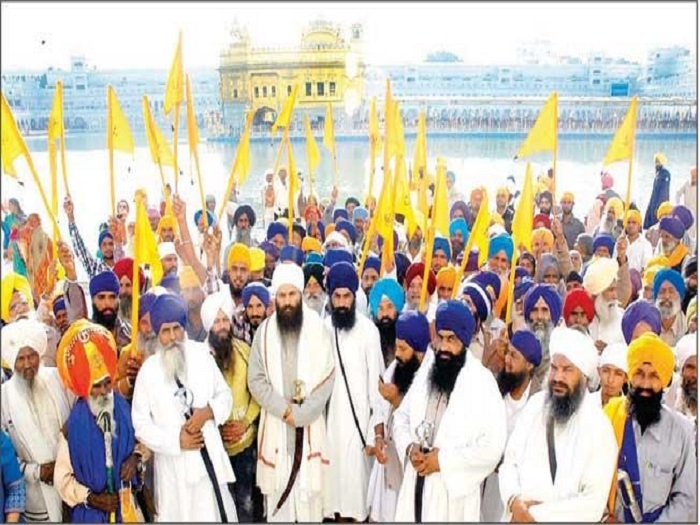 Nothing more than this perverted form of casteism had done damage to this great nation, in the past and doing even now. During different intervals of time in history, social reformists emerged and tried to obliterate this stigma. The principle of ‘Sangat and Pangat’ was conceived to induce equanimity and unanimity among the masses tormented by the torturous foreign rule. The so called Shudras were being considered as untouchable and were not allowed to drink water from the wells which were designated for the so called higher castes only.

The idea, of making all sections of society to sit together and eat, was to eliminate ill- effects of caste system from the society. Those, who were not ready to share water from wells with the so called people belonging to the lower castes, were voluntarily sharing food with them sitting in Pangat. There was a huge blow delivered to the stigma of casteism through the principle of ‘Sangat and Pangat’.

There are historical tales about Hindu warriors cooking their foods on their individual stoves instead of the whole army eating from a common kitchen. No prizes for guessing that such insane traditions cost many a wars to us and entrenched foreign rule on this land.

By perpetuating traditions and principles of ‘Sangat and Pangat’ the reformers not only dealt a lasting blow on inhuman practices of casteism, they gave messages of egalitarianism by trying to condense class gaps also. Rich and the poor eat same food served in same utensils and cooked in same vessels in the community kitchen in Pangat arrangements. The food known as Prasad is not only eaten together by all sections irrespective of class and caste, it is cooked also jointly by men and women belonging to cross section of the society. It is not that the devotees contribute by way of money and material, they consider themselves fortunate when provided with an opportunity to do Seva (service) in Gurudwaras.

Seva (service) in Gurudwaras is rendered not only to cook Langar (community meal) and for cleaning and sanitation, but putting the footwear of the devotees in racks while they are paying obeisance to the almighty is considered to be one of the finest forms of seva in Gurdwaras.

Sikh Gurus’ message has a universal appeal. Whether it is the institution of Langar which promotes the virtue of trusteeship among the human beings or the principle of ‘Sangat and Pangat’ which obliterates the difference of caste and creed, humanity has lot to benefit if these tenets are imbibed as way of life. We Indians have to set an example, by walking on the path shown by our great ancestors and then this world can become a better place to live in if our tenets of Vasudhaiv Kutumbkam and trusteeship are followed by the global community.