Indo Pak War of 1971: A glorious chapter in India’s history 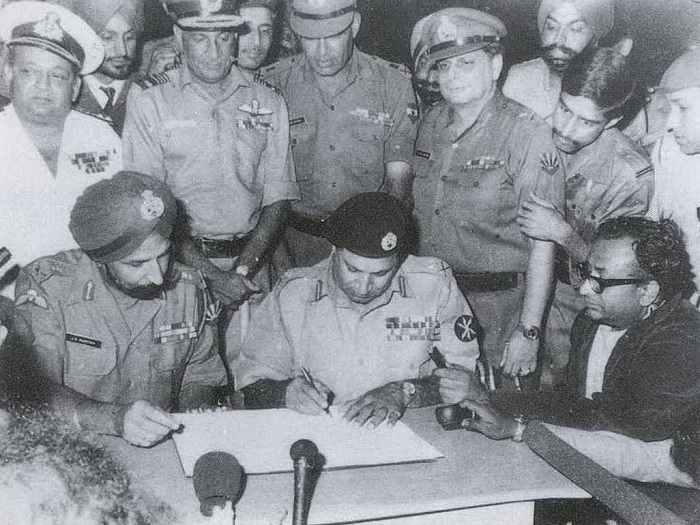 Both India and Bangladesh celebrate 16 December as “Vijay Diwas” when Pakistan Army was defeated in the 1971 War. This was a Two-Phased War, that is, First, the Guerrilla Operations by RAW and Second, direct intervention by Indian Army on 3 December,1971.

Prior to the December 1970 elections in Pakistan, RAW sources inside army, political and diplomatic circle of Pakistan had given clear indications that in case Sheikh Mujibur Rahman got a majority he would not be allowed to rule Pakistan.

Suddenly Pak Air Traffic, going over India, increased manifold. There were reports of shifting of huge army personnel to East Pakistan by the air route. RN Kao, the fabled Research and Analysis Wing (RAW) Chief, planned a meticulous operation to stop these over-flights on Indian soil.

On 30 January, 1971, an Indian Airlines Passenger Plane ‘Ganga’ was hijacked from Srinagar and taken to Lahore Airport. All 26 passengers were released and the plane was set on fire. This was an outdated plane which was due to be dumped soon. The Indian Government immediately banned over-flights going from West to East Pakistan. This was a brilliant operation by RAW.

This action of RN Kao hampered the transportation of men and material from air route although Pakistan continued it via Colombo but slowed down this process in view of the international outcry.

On 25 March, 1971, General Yahya Khan, the military dictator of Pakistan, arrived in Dhaka at 5pm amid tight security when the political solution was put on hold. General Yahya Khan was apprehensive that if any military action would start while he was in Dhaka, there was every possibility of Indian intervention. He was briefed that ‘RAW could play mischief which would be dangerous to his life as well as to Pakistan’.

General Yahya Khan did not want to risk being intercepted and forced to land in India by Indian Air Force at the behest of RAW. So, military action to curb East Pakistan rebellion was planned to follow after his safe landing/arrival at Karachi. After he landed at Karachi, message of his safe arrival was flashed to Dhaka by Pak Army Head Quarters. Immediately thereafter, the worst ever genocide of Bengalis started that night at 11.30 pm.

Around 1.30 am on 26 March, 1971, Mujib was arrested. Subsequently RAW intercepted a message of Pakistan Army that “The BIRD is Caged”. This message was flashed by Indian media all over the world. When Pakistan Army unleashed brutal crackdown on innocent East Bengalis, the influx of refugees increased beyond the control of Indian Administration. Prime Minister Indira Gandhi called Army Chief, General (later Field Marshal) Sam Manekshaw and RAW Chief RN Kao to discuss the ‘modus operandi’ to liberate East Pakistan.

She told General Sam Manekshaw that she wanted to take military action against Pakistan Army in this area. General replied that Indian Army had always been told by political bosses that their role was defensive and meant to protect the territorial integrity. If Indian Army was to put in action in East Pakistan, special riverine operation equipment and training was required wherein we were lacking.

The Chief did not want a premature operation in this war and repeat the mistakes of 1962 and 1965 wars. When Indira Gandhi asked the General, “How much time the Army would take for the preparation of offensive inside East Pakistan?” He replied: “At least six months”. She then asked the General to make preparations for the war and inform her when he was ready for it.

The Prime Minister then asked RN Kao to prepare all possible ground for the Army for its final assault. Kao's team of dedicated officers; K Sankaran Nair, Head of Pakistan Desk; PN Banerjee, Head of Bangladesh Operation, and Brigadier MBK Nair, Head of Technical Division of RAW; made all preparations around East Pakistan to train guerrilla outfits, “Mukti Bahini”, at all vantage points. That is where freshly ‘passed out’ young officers like this author were utilized to train and command the guerrillas of ‘Mukti Bahini’ during the operations inside East Pakistan.

Many monitoring stations were opened on borders and inside East Pakistan. A provisional “Bangladesh Government-in-Exile” was formed at Calcutta at Theatre Road on 14 April, 1971 and Mujib Nagar was named the Capital. A Bangladesh radio station "Free Bengal Betar Kendra" was established at Mujib Nagar for transmitting regular news/information in code, to the people of East Pakistan, the guerrillas and people like us on the impending plans of the Government in Exile and to coordinate various factions that were scattered in far flung areas.

Mukti Bahini was operational in majority parts of East Pakistan barring few areas where other guerrilla outfits were in command. Besides Mukti Bahini, the main guerrilla outfit; Mujeeb Bahini, another wing of Mukti Bahini, was operating in the Chittagong Hill tract under the direct supervision of Special Frontier Force (SFF) of RAW and the unit almost captured Lal Denga, a rebel Mizo leader, who was helped by Pakistan during a unsuccessful raid in Chittagong Hill Tracts to trap East Pakistan Army’s Chief of Staff, Major General Rao Farman Ali.

SFF and Mukti Bahini were solely responsible for liberation of Chittagong Hill Tract from Pakistan Army. There was another guerilla outfit, Kader Bahini, under RAW recruit Major Abdul Kader Siddique nicknamed as "Tiger Siddique" which played havoc with the Pakistan Army in and around Dhaka by disrupting communication systems, ambushing army columns, blowing up supply and ammunition dumps and assaulting enemy convoys. Many bridges were blown up by Tiger Siddique's force which hampered movement of Pakistan Army in that area.

Surrender of Pakistan's 93,000-strong Army in the Two-Week War with Indian Forces was made possible in coordinated venture of Phase I - Guerrilla Operations and Phase II - Final Assault of Indian Army. Phase I of this war belonged to RAW which trained a Guerrilla Force of more than 1,00,000 Bengalis to harass the Pakistan Army for eight months before the final war was fought in Phase II from December 3 to 16. This is a unique achievement of the RAW that has no parallel in the history of any other intelligence agency of the world.

A widespread genocide against the minority Hindu population in East Bengal forced India to accept around 10 million refugees in 1971. Lieutenant General Tikka Khan, the Military Commander in East Pakistan in 1971, earned the nickname of the “Butcher of Bengal” due to the atrocities he committed. The then Prime Minister of India Indira Gandhi decided to intervene in the Pakistan Civil War and help liberate East Pakistan. She did this to support democracy in East Pakistan, which was being denied its right to governance by Pakistani rulers. Due to the intervention of India in their Civil War, West Pakistan grew hostile.

Pakistani Air Force launched a “Pre-emptive Air Strike” on eleven Western Air Fields in India on 03 December 1971 at around 5:40 pm. “Trying to catch the Indian Air Force napping” Yahya Khan, launched a Pakistani version of ‘Israel’s 1967 Air Blitz’ in hopes that one rapid attack would cripple India’s far superior Air Power. But India was alert, Pakistani pilots were inept, and Yahya’s strategy of scattering his thin air force over a dozen air fields was a bust.

Indira Gandhi held that the air strikes were a declaration of war against India. “We must be prepared for a long period of hardship and sacrifice” she said and Indian Air Force replied with air strike that very night with all their might. Within two days IAF gained Total Air Superiority in Eastern and Partial Air Superiority in Western Sectors.

On Sea Front, ‘Operation Trident’ was conducted by the Indian Navy. Karachi Port was attacked by India on the night of 4/5 December in which Pakistani Destroyer PNS Khyber and Mine Sweeper PNS Muhafiz were destroyed and PNS Shahjahan was badly damaged. On 8/9 December, the speed boats of Indian Navy audaciously destroyed and damaged 10 Pakistani battle ships and vessels by P 15 Soviet Anti-Ship Missiles in renewed attack on Karachi. In addition, 12 Pakistani Oil Storage Tanks were burned in flame. INS Vikrant used its Sea Hawk fighter-bombers to attack many coastal towns in East Pakistan including Chittagong and Cox’s Bazaar.

In order to counter these attacks by Indian Vessels, Pakistan sent its submarine PNS Ghazi. This submarine sank en route under mysterious circumstances off Vishakhapatnam’s coast. In the very first days of the conflict the Indian destroyer ‘Rajput’ had sunk that Pakistani submarine with deep bombing. On 09 December, Indian Navy suffered its biggest loss when INS Khukri was sunk by PNS Hangor in the Arabian Sea. 18 officers and 176 sailors lost their lives. Pakistan Navy lost one third of its force in the 1971 war.

US supported Pakistan in this war. On 09 December, Richard Nixon (then President of US) decided to send his Seventh Fleet headed by Aircraft Carrier USS Enterprise into the Bay of Bengal to threaten India. The plan was to surround India from all four sides and force them to retreat and leave East Pakistan. The Soviet Union sympathized with and supported the Indian Army. The USSR gave assurances to India that in case of confrontation with the United States or China, it would take counter measures under “20 Years Treaty of Friendship and Defence Cooperation”. 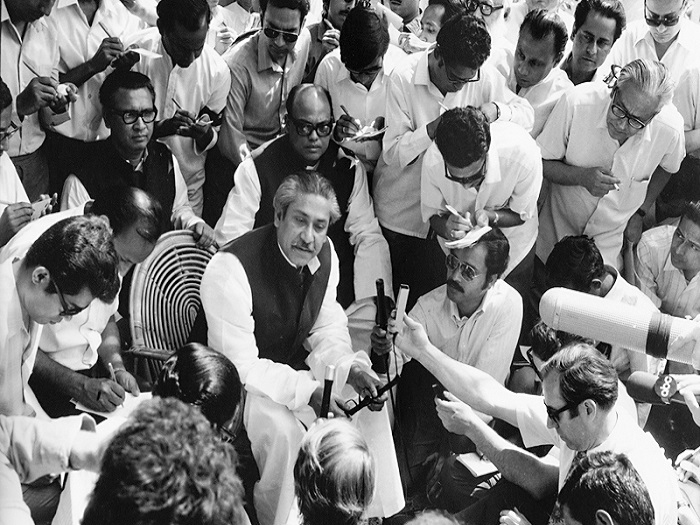 China, a long standing ally of Pakistan, was encouraged by US to mobilize its Armed Forces along its border with India. However, due to lack of dominant positions on the Sino-Indian border, China demanded an immediate ceasefire. Sri Lanka helped Pakistan in the 1971 War by allowing its aircraft to refuel at Bandaranaike International Airport in Colombo. “We in Pakistan cannot forget the logistical and political support Sri Lanka extended to us in 1971 when it opened its refueling facilities for us” is what Seema Ilahi Baloch said in her speech to a Lanka-Pakistan business council in Colombo just after war.

In Ground Operations, Indians employed “blitzkrieg” techniques to break through the Pakistani line of defence and dislocate them using speed and surprise. The ‘Instrument of Surrender’ was signed by Lieutenant-General A.A.K. Niazi of the Pakistan Army at Ramna Race Course in Dhaka on 16 December 1971. He surrendered to Lieutenant General Jagjit Singh Aurora, Joint Commander of the Bangladesh-India Allied Forces.

Approximately 93,000 Prisoners of War, including Pakistani soldiers and their East Pakistani civilian supporters were taken by India. It was the largest number of POWs since the Second World War. On same day, Indira Gandhi declared in the Indian Parliament “Dacca is now the free capital of a free country. We hail the people of Bangladesh in their hour of triumph. All nations who value the human spirit will recognize it as a significant milestone in man’s quest for liberty”.

Pakistan faced humiliation and a complete setback. In his book “The 1971 Indo-Pak War: A Soldier’s Narrative” Pakistani Major General Hakeem Arshad Qureshi, a veteran of this conflict noted “We must accept the fact that, as a people, we had also contributed to the bifurcation of our own country.” The Hamoodur Rahman Commission, which was set up to investigate the causes of defeat of Pakistan, laid the blame squarely on Pakistani generals, accusing them of debauchery, smuggling, war crimes and neglect of duty.

In 1972, the ‘Shimla Agreement’ was signed between India and Pakistan. India returned the POWs to Pakistan along with certain captured areas. In return, Pakistan recognized Bangladesh as an Independent country. Lance Naik Albert Ekka, Flying Officer Nirmal Jit Singh Sekhon, Major Hoshiar Singh and Second Lieutenant Arun Khetarpal were awarded Param Vir Chakra for their service in the ’71 war.

India won a glorious victory against Pakistan in the 1971 war. It was the first decisive victory in a major war in centuries. And it was won singlehandedly, in the face of opposition and threats from a majority of the UN member-states, including a superpower. Every Indian patriot felt proud of this glittering chapter in the nation’s history. A very strong leader like Indira Gandhi will never come again. What a lady she was !