"Your Dalit vs Our Dalit"

With the announcement of former Lok Sabha Speaker Meira Kumar as its presidential nominee the conglomerate of 17 opposition parties have unfortunately divided the country into "Your Dalit and Our Dalit". 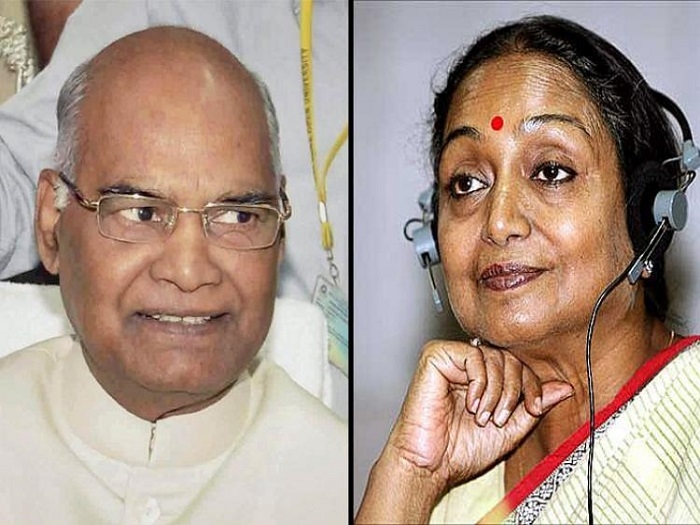 It is very unfortunate that the political parties could not arrive at a consensus on electing a president who is the most non-partisan and impartial person. Instead they raised the issue of his being ‘Dalit’ and accused the NDA of playing caste politics.

In fact, it is not the exactly the “battle of ideologies” as they are portraying. It is blatant ‘anti-Modi’, ‘anti-BJP’ and ‘anti-RSS’ stance adopted by the Opposition conglomerate.

By announcing the candidature of Ram Nath Kovind, Prime Minister Narendra Modi has succeeded in killing too many birds in one single master stroke. The three-minister group of BJP earlier met all the political parties seeking their consensus on their candidate but Congress and other parties refused to support on the flimsy ground that no names were discussed.

When the NDA declared Kovind’s name it came as a surprise master stroke for many of the opposition leaders. They never expected the BJP to project a Dalit as a presidential candidate. This made them most unstable as they could not oppose nor support Kovind’s candidature.

Many political parties also raised a hue and cry over the announcement of his name notwithstanding his being Dalit and even doubted his capability as President of the country. It was as if they were saying “if he is your Dalit, we will field our Dalit”. The Left parties even came up with the name of their Dalit – Prakash Ambedkar.

Such an immature stance adopted by these ‘matured’ parties reduced the presidential election to a fight basically based not on personalities and qualification, but on the caste. This is very unfortunate.

BSP Supremo Mayawati, the self-styled champion and messiah of Dalits, had no other alternative but to support Kovind. She made such an announcement too putting the Opposition alliance into jeopardy. Bihar Chief Minister Nitish Kumar had already declared JDU’s support to Kovind and refused to rethink over it even after the fielding of another Dalit candidate in Meira Kumar. His ally Laloo Yadav has taken up the responsibility to convince Nitish Kumar to reconsider his plans; it seems next to impossible given the way politics in Bihar is being conducted by the JDU-RJD alliance.

Mayawati, however, was more than happy with Meira Kumar as she had said on record that the BSP had no other alternative but to support Kovind as he is from a Dalit community. But she was sceptical over his association with RSS. So, when another Dalit Meira Kumar’s name figured she was the first to be happy to withdraw support to Kovind and extend to Kumar. Even the chameleons would take more time to change their colours.

That the entire exercise of this ‘anti-Modi’, ‘anti-BJP’ and ‘anti-RSS’ opposition is sure to fail is a foregone conclusion as NDA has over 62 percent votes to get its candidate elected. In such a scenario, it would have been wise on the part of Meira Kumar to politely refuse the proposal of the ‘anti-Modi’ gang of politicians and extend her support to ‘Dalit’ Kovind. But that did not happen for the reasons best known to her.

The mainstream media (MSM) too did not lag behind in raising the issue of ‘Dalit vs Dalit’. They were surprised over the secrecy on the presidential candidate by Prime Minister Modi. During the demonetization decision, the MSM was completely in the dark. This time also they could not get any indication. They were running a good number of names including Ratan Tata, Metroman K Sreedharan, Sushama Swaraj, Dr Swaminathan, and so on. Shiv Sena even proposed the name of the RSS Sarsanghchalak Dr Mohan Bhagwat. But none of them were on the mind of the Prime Minister.

The announcement of Kovind’s candidature obviously came as a surprise for the media which saw it as an exercise of the BJP to consolidate its base among the Dalit community which has drifted apart from the Congress and BSP in the recent elections. To some, it appeared that the BJP wanted to ‘use’ Kovind as a ‘pawn’ in its scheme of expansion of party’s base among the Dalits and backward sections. Some others saw this as a ‘cosmetic’ decision and doubted how far it will help the BJP.

It is true that Ram Nath Kovind is not much in the limelight. He, being a farmer's son, comes from a humble background. He devoted his life to public service & worked for poor & marginalised. Even before he was named as Bihar Governor, he was not known outside as his other compatriots in the BJP. He served as president of BJP’s SC Morcha and as member of the Rajya Sabha but he was never in the public limelight. His tenure as Bihar Governor was also a silent and non-controversial affair.

Therefore, it was quite natural for the MSM to search the internet search engines to dish out very primary information about India’s future President! That Kovind was highly educated, practiced at the Supreme Court and contributed to expanding party’s base among the Dalits being the president of the SC Morcha were eclipsed by his being Dalit and that is the only highlight the MSM made! How unfortunate.

Never before in the history of Independent India was the election of the president reduced to such an abysmal low. Dr Rajendra Prasad was the first president and he remained so for 12 years. Nobody discussed his caste. It was only during the Congress rule when a former bureaucrat K R Narayanan was made the president, the issue of caste came up. Congress stalwarts felt that by fielding Narayanan – a Dalit, they could make sufficient inroads into the Dalit constituency and garner their support. Nothing of the sort happened. It was during Narayanan’s tenure the Congress faced electoral debacle twice!

BJP fielded Kovind not because he is a Dalit and not because the party wants to reap some electoral benefits from his being a Dalit. It is because he is capable of doing justice to the top post of the nation. Prime Minister Modi said that Ram Nath Kovind with this illustrious background in the legal arena, his knowledge and understanding of the Constitution will benefit the nation.  The PM also exuded confidence that Kovind will make an exceptional President and continue to be a strong voice for the poor, downtrodden and marginalised.

It is true that Kovind comes from a Dalit background but he never used this to gain some political benefits or favours in the party and the government because he grew up in the ‘sanskars’ of the RSS which inspires an individual to sacrifice everything at the altar of the motherland. Kovind belongs to that exemplary category of public leaders. Therefore, by projecting his candidature in the 125th anniversary of Dr Babasaheb Ambedkar the great champion of the Dalits the BJP has paid a unique tribute to him. The opposition should have shown some magnanimity to accept Kovind as ‘their Dalit’ and avoid the conflict between ‘Your Dalit and Our Dalit’.