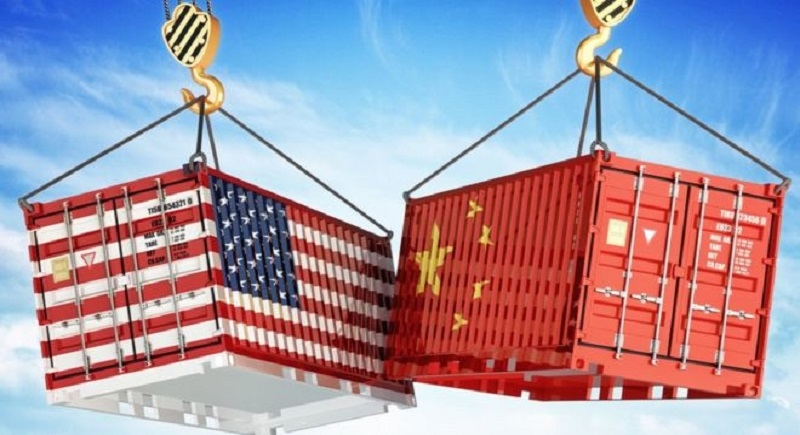 Is India facing the backlash of Sino-U.S. “Trade War” unsettling its economic stability so critical with elections to State Assembly’s in 2018 followed by Lok Sabha elections in April-May 2019?

Trump's first action as President in January 2017 was to formally withdraw from the 12 member Trans-Pacific Partnership. Followed “Sharing the Burden” for maintaining peace and strategic equilibrium in international plane with his attack on his strategic alliance partners – NAFTA, EU, NATO, JAPAN among others. Add to it, renewed sanctions against Russia, besides imposition of sanctions on Iran. After the initial “fire and fury” bluster against North Korea, Trump appears to have befriended Kim Jong Un what with denuclearization of Korean peninsula resolution still “so near and yet so far”.

Trump’s real offensive began on the “Trade Front” – Trade War - on 22 January 2018, when he imposed tariffs on solar panels and washing machines of 30 to 50 percent. On 8 March, he imposed tariffs on steel (25%) and aluminum (10%) from most countries. On June 1, 2018, this was extended on the European Union, Canada, and Mexico. The only countries which remain exempted from the steel and aluminium tariffs are Australia and Argentina. Separately, on July 6, the Trump administration set a tariff of 25% on 800 categories of goods imported from China worth $50 billion.

The tariffs angered trading partners, which implemented retaliatory tariffs on U.S. goods. China accused the U.S. of starting a trade war and on July 6 implemented tariffs equivalent to the $34 billion tariff imposed on it by the U.S.

The US rejected India’s request to exempt it from the 25% steel tariff and 10% aluminum tariff. India has deferred its plan to impose retaliatory tariffs on steel and aluminum imports from the US till early November. The move comes in the wake of reports that US may be willing to exempt India from higher steel and aluminum tariffs as part of the discussions in the Indo-US trade talks. India has also dragged the US to the dispute settlement mechanism in the WTO over the matter. India also planned to recoup trade penalties of $241 million on $1.2 billion worth of Indian steel and aluminum.

Next, “Is “Currency War” also in making simultaneously with the trade war? What about the galloping increase in Brent Oil crude prices during 2018? Conjointly, the trade war, currency war and the soaring Brent Crude oil prices are adversely affecting economies of developing nations including India.

The currency war is real. China’s yuan-dollar value from the low of 6.264 in February 2018 increased to 6.9228 on 10 October 2018, the devaluation is almost 10%. Its advantages for China include: offset most of the U.S. tariffs, making Chinese exports about as competitive as they were before the trade war began; and unsettle the stock market thereby weaken the U.S. resolve. When China devalued the renminbi in the summer of 2015, stock markets around the world shuddered.

However, China too faces risks to include: massive capital flight like the currency depreciation of 2015 to 2016; likely push other emerging-market currencies further down as well, which would make their debt burdens that much harder to bear; and cheaper renminbi and a flood of Chinese imports would also further anger Japan and the EU.

Let me highlight that trade tension between the United States and China is not a new phenomenon. Since China’s ascension to the World Trade Organization (WTO) in 2001, the two countries have brought as many as 35 disputes against each other. Yet, the recent series of events is different and threatens to be escalatory and prolonged.

Trump’s trade war against China, is based on two reasons: billions of dollars theft of intellectual property and top secret technology information that has resulted in loss of thousands of jobs and billions in revenue; and unfair restrictions on foreign companies that want to do business in China, requiring them to become minority partners in joint ventures, transfer intellectual property. In contrast, Chinese companies do not face similar constraints in the U. S. Also, China uses nontariff barriers and subsidies to build national champions and block foreign competition.

Trump’s premise is based on “China would be hurt badly because exports, mostly to U.S. account for a big share of Chinese economic growth. By contrast, China has fewer options to impose retaliatory tariffs on the U.S.”

As on date, tariffs imposed/proposed by Trump include: $50 billion on 15 June, 2018; and 10 per cent tariffs on $200 billion in September, 2018 to rise to 25 percent by January 2019. Trump has threatened to impose another $267 billion that effectively covering all the goods China sells to the U.S. each year ($506 billion in 2017). Both have placed new limits on foreign direct investment from the other, with murmurings of broader controls in the offing.

China's new tariffs are levied at rates of 5% or 10%, depending on the product, from the same date, the Chinese government said. More than 5,000 US goods will be affected, including meat, nuts, alcoholic drinks, chemicals, clothes, machinary, furniture and auto parts. The dispute now includes about 10,000 products traded around the world, and could grow to target almost 90 percent of what China sent to the United States last year.

Can the U.S. win the trade war with China? What is its fallout on other developing nations? The African proverb “"When two elephants fight, it is the grass that gets trampled" is quite relevant for the developing nations economies too would suffer adversely due to fluctuations in currency values, collapse of stock markets and soaring oil and gas prices. India is no exception.

IP theft is not the most important issue. The IP is gone and is not coming back. What everyone want is China’s commitment to observe the rules and norms of international trade. If the world’s second-largest economy feels free to flout trade practices, rest of the nations are al in trouble.

Despite Trump’s confident assessment at the UN meeting recently that “we are winning on every level”, but China shows no signs of backing down. As per experts, the trade war launched by Trump threatens to unsettle the global economy if the dangerous game of tit-for-tat persists.

Xi Jinping has seized the opportunity to reinforce the Communist Party’s message that the U. S. is determined to stop China’s rise as a global power. China is clear in what it wants, as it moves “closer than ever to the center of the global stage.” China is already too strong, its economy too big. China is “more confident and able than ever to realize this goal,” which is to displace the U.S. in economic and technological leadership. “China will not be blackmailed or yield to pressure,” Chinese Foreign Minister Wang Yi said recently in New York.

China also views the trade war as an opportunity to drive a wedge between U. S. and its partners by framing the U. S. as the unilateralist instigator and China as the principled protector of the global trading system. The longer U.S.-China trade tensions persist, the more likely China will offer concessions to traditional U.S. partners like Japan, Canada, and the EU to draw them closer to China.

So, China has been acting calmly in its counteraction against the US-led trade war. China with vast land, abundant resources and a large population, enjoys favorable conditions in economy with its unique advantage in domestic market, which offers large space for maneuver. Thanks to the market size, China enjoys high macroeconomic stability, which enables its government to have a wide space in implementing macro-control and maintaining stable economic growth. Statistics show that domestic final consumption has been making high contribution to China’s economic growth, and has been generally on an upward trend in recent years.

To date, China is striking back the US where it hurts: Soybeans and Oil and LNG purchases. China’s counter-tariffs is targeting “swing states” with industries affected most by China’s first tranche of tariffs, which included automobiles, lobster, and other agricultural products, low-income Americans. Chinese policymakers know that today’s U. S. is divided and are betting that pitting Americans against one another is a winning strategy.

Most important to note, in the 12 months leading up until June 2018, China was the second-largest buyer of US LNG, according to energy consulting firm Wood Mackenzie. Shell, the US subsidiary of Royal Dutch Shell (RDSA), was the largest seller. Instead of U.S., China is turning more to LNG powerhouses Qatar, Australia and Russia.

Four distinct advantages for China include: faster shift from low-end manufacture to high end-cum-high value product manufacturing; incentivise Chinese companies to upgrade technology to become more competitive; double down on efforts to boost homegrown innovation; and retain focus on “Made in China 2025” industrial policy. Xi’s top objective is to develop China into a “modern socialist country” by 2035 and transform the country into a more powerful nation by 2050. Overall, the trade war appears to be helping China's economy in a long term context.

In reality, the fallout of trade war is already hurting not only companies on both sides of the Pacific, but the rest of nations in the world. . Markets have been rattled, and companies have been forced to reshape their operations. The costs of household goods are rising. Meanwhile, American farmers and business owners fear they will lose access to the lucrative Chinese market: a middle class of consumers larger than the entire U.S. population.

As stated in the foregoing, China has let its currency – renminbi also known as the yuan— slide by about 9 percent against the dollar to the lowest level in several years. But further devaluation would be a risky play for China. The only way Beijing can avoid further devaluation is by stepping in and actively propping up the currency spending more than $1 trillion in foreign-currency reserves.

Viewed in such a overall framework, the trade-cum-currency wars between the U.S. and China – the two Elephants – may be waged with unrelenting fury may not have an early resolution. Meanwhile, the worst sufferers would be developing nations whose economies will be undergo major convulsions with major fall out on domestic political outcomes, particularly India.

India cannot avoid the adverse fallout of U.S. Sanctions on Iran and also on Iran. The only escape route is to follow the EU initiative - set up a special global payments system to allow companies to continue to trade with Iran despite U.S. sanctions. Friends and foes of the United States were already seeking paths away from the traditional, dollar-dominated financial system.

In May, U.S. President Donald Trump delivered on his promise to leave the Iran deal, also known as the JCPOA, and re-impose unilateral, aggressive economic sanctions on Iran. The most forceful of these measures will snap into place on November 4, dropping an axe on Iran’s core banking institutions, oil sales, and conduits to the global financial system. The measures will prevent Iran from using the prevalent global payment system. They will also cause most of the international businesses that buy Iranian oil and conduct other commercial transactions with Iran to cease such activity.

Locked horns; but do not know how to disengage.