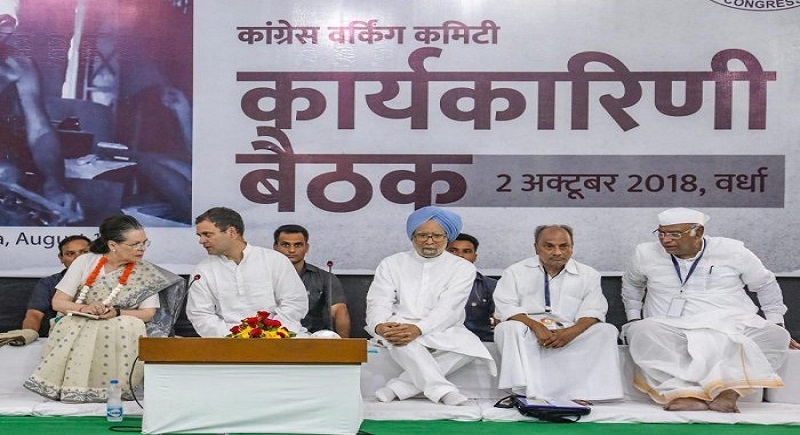 The Congress Working Committee (CWC) meeting at Sewagram near Wardha in Maharashtra on October 2 coinciding the 150th birth anniversary of Mahatma Gandhi, has resolved to launch a “second freedom struggle” to liberate the country from the shackles of “Modi Raj”.

The resolution adopted unanimously by the CWC called for a “new freedom struggle” against the Modi Government to combat the ideology of ‘hate and violence’ which led to the assassination of Mahatma Gandhi seventy years ago.

The resolution also called for exposing the ‘hollowness and doublespeak’ of the ideologies that have never believed in the Gandhian path and appealed to the young citizens to determinedly fight the politics of fear, intimidation, lies and deception.

The CEC resolution further said that the “new freedom struggle” was the ‘urgent need of the hour’ to combat the forces of ‘divisiveness and prejudice’. 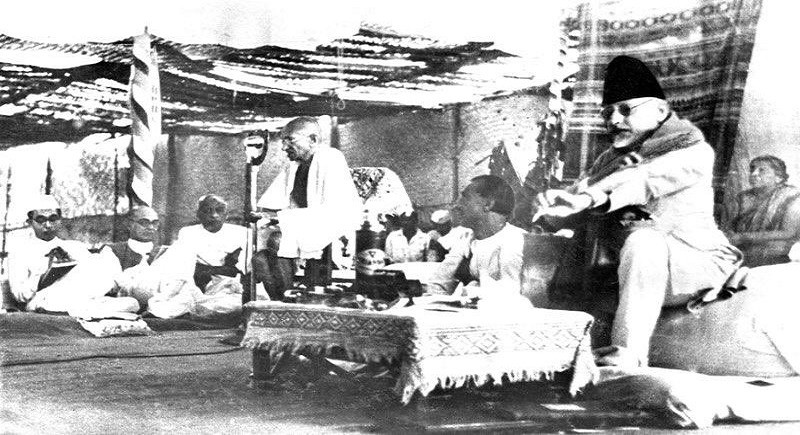 The Original Congress Working Committee meeting at Sewagram in 1942
This resolution has a historical reference. Way back in 1942, when the country was at war with the British Occupation Government to earn freedom, the CWC in presence of Mahatma Gandhi, Maulana Azad, Sardar Patel, and others had deliberated and finalised the call for ‘Quit India’ movement. It is against this background the Congress of Rahul and Sonia Gandhi has organised the CWC meeting at Sewagram.

Another reason for holding this meet here is the place is near Nagpur, the headquarters of Rashtriya Swayamasevak Sangh (RSS), which, started by its founder Dr K B Hedgewar, a former Congressman in 1925, has become the most influential organisation in India and globally also. Naturally, the Rahul Sonia Congress (RSC) has assumed the RSS to be their number one enemy and what could be the better opportunity and place to challenge the enemy from its own land. Hence, the meeting at Sewagram!

Recently, RSS Sarasnghchalak Dr Mohanrao Bhagwat conducted a three-day lecture-cum-Q & A series at New Delhi addressing directly to the media and selective intellectuals and opinion makers from almost all the fields of national life. The RSC and other fake secular parties had not dreamt of such an offensive move by the RSS. The Sewagram meeting was seen by some observers as an attempt of the RSC to counter the impact Bhagwat’s lectures had created on the country’s intelligentsia. 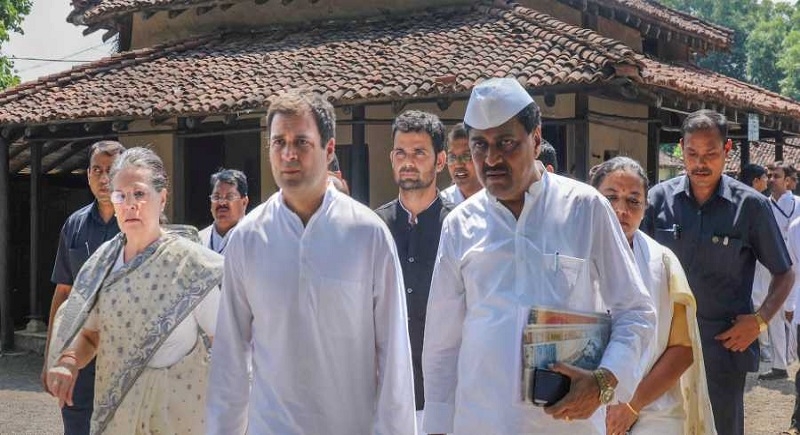 India is a democracy and every party has the freedom to chalk out its strategy that would lead it to seat of power. The Congress by virtue of its singularity in freedom struggle, reaped the political benefit and ruled this vast country from panchayat to parliament uninterrupted from 1947 to 1967. After a brief intervention of the SVD government experiment, it again rode back to power, imposed internal emergency when it sensed threat to its hegemony and again barring a brief experiment of Janata Party government, came to power and remained so till 1996. That makes the Congress the largest ruling party of India. And yet, the country was lagging behind supply of drinking water, reach of electricity, better roads in rural, semi-urban and urban and metro cities, better civic amenities, better irrigation facilities, better flood management policies and above all a strong resolve to deal with internal and external disturbances.

No doubt, the country made certain landmark strides in progress in technology, science, space research, agriculture but on an average the common man still remained where he was and a handful of political leaders, mostly belonging to the Congress family, a few businessmen and industrialists owing allegiance to Congress leadership became rich beyond limitations.

The corruption during the ten-year rule of the RSC headed by Sonia Gandhi and her puppet PM Manmohan Singh took the country to such an abysmal low in every aspect that it almost took the incumbent government four years to put the things back on the rails. The massive corruption indulged in by the RSC leaders, bureaucrats and businessmen like Mallya, has tarnished the image of the country beyond redemption.

Against this background the incumbent government headed by Prime Minister Narendra Modi has assumed power four years ago. The RSC has not learned from the crushing defeat it received in 2014 elections and in each election losing state after state in the following years. The RSC president Rahul Gandhi has no vision for development of India, progress of people and uplift of masses. He is only hurling abuses at the Prime Minister from the day one and the CWC resolution adopted at Sewagram also reflected this attitude with an ample clarity. No one should have any doubt about the RSC and Rahul and Sonia Gandhi who are on bail in a criminal case, that their ulterior motive is to destroy the unity and integrity of this country for their personal benefits and that they are using the RSC to cover their real intentions. 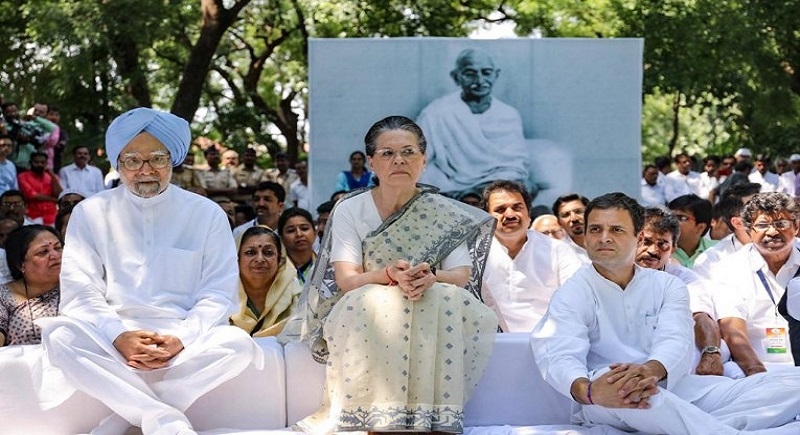 There is a story of a wolf in sheep’s clothing that mixes with the flock of the sheep and kills a sheep a day to satisfy his hunger. The RSC today is just like that. They are hiding their real motives behind the lofty terms of democracy, secularism, plurality, debate and dissent and so on. I need not remind the countrymen of the dreaded emergency that was imposed to save the chair of one person – Indira Gandhi – whose election was set aside as null and void by the Allahabad High Court. Showing scant regard to the judiciary she did not hesitate to hold the right to life of the ordinary citizens to ransom just to satisfy her lust and hunger for power.

And what was the intention of the RSC leaders in raising the bogey of ‘Hindu Terror’, ‘Saffron Terror’ etc. The Congress is aware that the real challenge to its hegemony could come from the nationalist forces represented by organizations like the RSS and parties like the BJP. Vajpayee could continue with a coalition of over one and a half dozen of parties successfully and the incumbent Modi Government is a coalition of 29 parties. Yet each party is given its due representation and share in the government. And what the Congress did with their partners? They ditched them at the very first opportunity they seized. Nay, it even ditched the Mahatma in the very first year of independence, and yet it claims to be rightful heir of his legacies. How ironical!

The CWC resolution also fails miserably to explain the RSC’s idea of India and vision of development simply because it does not have one. Repeating the same old allegations against the BJP and the RSS, the resolution has shown that the party hasn’t yet learnt from its past mistakes. On the other hand, the BJP and NDA under the visionary leadership of Prime Minister Modi implemented many welfare programs that in the right earnest improved the lives of the masses. This government has taken electricity to all the villages in the country, the job the Congress governments should have done years ago. Same is the case with providing cooking gas connections to poor households, providing health insurance cover to half of the population and improving the financial condition of farmers, housing for all by 2022, improving road connectivity, and boosting economy. The RSC does not have a proper vision on any of these issues and programs right now that is why it is indulging in personal attacks against Prime Minister Modi and his team stopping to abysmally low levels.

The message of Sewagram, therefore, is very clear for all the citizens of India: Reject the Rahul Sonia Congress (RSC) lock, stock and barrel as it has become irrelevant and redundant in the present context and rejuvenate the original Congress of Mahatma Gandhi, for, India needs a competent opposition party to make it a healthy democracy in the comity of nations.