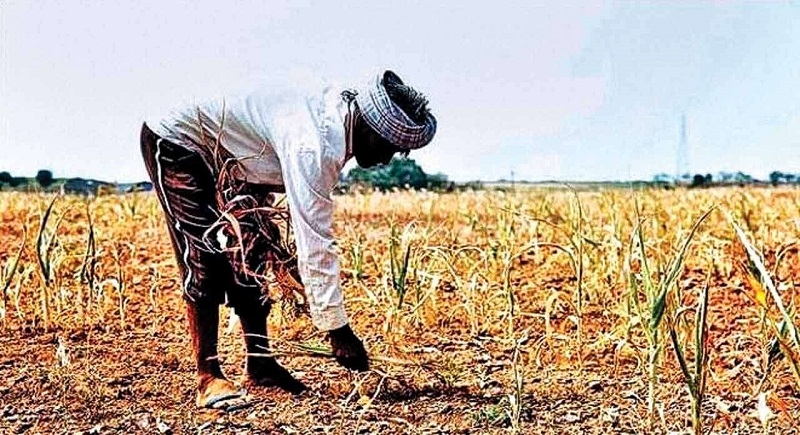 Is ‘farmer’s distress and loan waivers’ manufactured deliberately to reap political gains? What is the reality? Is it “Good Politics; but Bad Economics”?

Basic facts of loans: Crop Loan based on Pass Books @Rs.50,000/- per acre; and Mortgage Loans based on 50% of market value of land. Add to it, input grants like Rythu Bandhu scheme @ Rs.4,000/- per acre per crop and input subsidies.

Politicization of farmer’s issues is real. P. Chidambaram, who never tilled the land, is challenging people to cultivate 2 acres land for 10 years and then talk about “Farmer’s Loan Waivers”.

P. Chidambaram is shameless and absurd in his postulation to farmer’s loan waiver critics. Justified if small farmers with 2-acres land are marginal farmers and given ‘loan waivers’. But, in the name of farmers there are others who are committing fraud on the tax payer’s money.

Let me provide a perspective of realities as an erstwhile practicing farmer until 3-years ago with All India experiences and exposure of agricultural practices (5-years as Senior Visiting Fellow and Consultant at National Institute of Rural Development).

Agriculture is a State subject. So, farmers’ loan waiver falls under the State government. However, the Central Government is responsible for overall fiscal management, fixing of Minimum Support Price (MSP), agriculture infrastructure and exports of agriculture products.

First, obfuscation of categorization of farmers is real. Many categories of “farmers” include: small (2-acres), marginal (5-acres), medium (10-20 acres), large and corporate farmers particularly of plantations, seed farms etc. Ironic but true, the generalization of “poor farmers” is the worst fraud. Today, majority of farms owned by landlords are cultivated by tenant farmers on 50:50 share basis.

Chidambaram has left out “tenant farmers” – real workhorses – of consideration of “farmer’s distress and loan waivers”. Tenant farmers are not eligible for loans from Agricultural Cooperative Banks and Commercial Banks. They take loans from money lenders at 18 to 30% interest rates.

The justification by ‘farmers’ lobbies” for “farm loan waivers” is simple. When government is giving so many concessions and waiving off multinational companies taxes and debts, what is wrong in waiving off agricultural loans. After all, the poor farmers do not even get the MSP.

Today, all categories of farmers avail loans. Why? The local Sarpanch lucidly explained the reasons for taking loans to include: loans will be written off whenever there is drought (once in three or five years); legal ownership of farm will be upheld should there be any dispute; and low interest rates.

Today, if one takes a survey of loans by farmers in Telangana region, majority take loans from banks even after being beneficiaries of Rs.8,000/- (Rs.10,000/-) per year for 2 crops under the Rythu Bandhu Scheme.

Next, how can one justify ‘Farm loan waivers” to Seed Companies, Corporate Farms, and plantations of all types? Other crops can also be added to the list of non-qualifying crops with the possible exception of pestilence and devastation due to natural disasters.

Furthermore, how can bank loans and Rythu Bandhu allocations be availed by a fairly good number of “City Dwellers” owning farm lands acquired astride the National and State Highways as “Real Estate” investments and lying barren or cultivated by tenant farmers? Is it not the most heinous fraud?

Even the issue of “Farmers distress and loan waivers” of those under the “Canal Irrigation” systems facilitating assured 2 to 3 crops in a year needs pragmatic review. The real justification for ‘farm loan waivers’ to such categories is due to ‘glut’ conditions in market and non-realization of reasonable prices due to them giving appropriate profit.

Fifth, the issue of Minimum Support Price (MSP) was identified long ago. It is not a new phenomenon. For example, media regularly highlights the ‘glut’ conditions of Onions, Tomatoes, Potatoes etc., resulting in non-remunerative prices. As a practicing farmer, I too had to throw the “Tomatoes” at the “Auction Platform” on a few occasions.

The National Commission on Farmers, chaired by Prof. M. S. Swaminathan, submitted five reports through the period December 2004 - October 2006. His final report focused on causes of famer distress and the rise in farmer suicides. He recommended addressing them through a holistic national policy for farmers. He had highlighted the need for land reforms, irrigation, credit and insurance, food security, employment, productivity of agriculture and farmer competitiveness.

Of course, the hue and cry – protests – demanding higher MSP is on the regular basis. The demand for revision of MSP is due to increase in input costs particularly labor costs - Rs. 300 per head of women labor in current context. Even the labor costs too vary from region to region. In fact, the present system was evolved in 1975-76, in which only one set of prices was announced for paddy (and other kharif crops) and wheat being procured for buffer stock operations.

Government announces minimum support prices (MSPs) for 22 mandated crops and fair and remunerative price (FRP) for sugarcane. The mandated crops are 14 crops of the kharif season, 6 rabi crops and two other commercial crops. In addition, the MSPs of toria and de-husked coconut are fixed on the basis of the MSPs of rapeseed/mustard and copra, respectively.

In the Union Budget for 2018-19, the MSP for cereals and pulses to guarantee farmers at least 50 per cent returns on production costs has been announced in accordance with Swaminathan’s Report.

Sixth, hardly political leaders and agri-experts apply themselves to formulate credible and ensure their effective delivery at the grass toot levels particularly to enhance productivity or yields of various crops – currently nearly half of his counterparts in China, South Africa and others. Why? It is due to lackadaisical attitude to transfer of modern cultivation technologies based on highbred varieties.

In situ value addition food processing facilities near major “marketing” yards so that “Bumper Produce of Potatoes, Tomatoes, chilies, red gram etc.,” are not dumped on road sides. Add to it, allowing exports in advance instead of ‘knee-jerk’ responses.

What is needed is an entirely different and dynamic agricultural reforms and modernization including "Green House Technology" in large acreages as done in Almeria ‘green houses in Spain – 26000 hectares in one place.

Of course, facilitating direct farmer-consumer linkage remains only on paper. The conventional 4-stage marketing continues: Auction Platforms to Marketing Centers/Brokers-Retailers-Consumer chain. Centralized post-harvest management and value addition remains distant prospect. And, the middle-man or brokers exploit the farmers to the hilt – buy at Rs.2 per Kg and sell it to the customers at Rs.20 per kg.

Other suggestions of Dr. M S Swaminathan like availability of data about spot and future prices of commodities through the Multi Commodity Exchange (MCD) and the NCDEX and the APMC electronic networks covering 93 commodities through 6000 terminals and 430 towns and cities besides, State Agriculture Produce Marketing Committee Acts [APMC Acts] relating to marketing, storage and processing of agriculture produce has failed to shift to one that promotes grading, branding, packaging and development of domestic and international markets for local produce, and move towards a Single Indian Market.

The only silver lining is the setting up of Agri-Market Infrastructure Fund, with a corpus of Rs 2,000 crore, for developing and upgrading agricultural marketing infrastructure in the 22,000 Gramin Agricultural Markets and 585 Agricultural Produce Market Committees (APMCs). This will enable farmers in remote locations who are devoid of any institutional mechanism to connect to markets. “Operation Green” on the lines of “Operation Flood” is needed to tackle the volatility of tomato, onion and potato prices.

Finally, viewed in the above frame work, politics over economics of farm loans reflects intellectual bankruptcy. As per Niti Aayog, farm loan waivers are not a long term solution. A cursory look at the loan waivers by various states include: Rs.70,000 crores by BJP ruled UP, Maharashtra; Rs.60,000 crores by Congress Party ruled MP, Chhattisgarh and Rajasthan. No concern for fiscal discipline and revenue deficit. For example, revenue surplus state like Telangana has become revenue deficit state.

Chief Minister Captain Amarinder Singh had declared that his government would take over the debt of every farmer, totaling Rs 67,000 crore. However, the Punjab government has so far waived only Rs 1,750 crore of loans up to an amount of Rs 2 lakh each availed by marginal farmers from cooperative banks. The state is only now about to launch a second round of waiver covering loans worth Rs 1,771 crore from commercial banks, which is again restricted only to marginal farmers. Small farmers with holdings between 2.5 and 5 acres will have to wait for their turn, probably till the middle of next year.

Karnataka has just finished the process of identification of beneficiaries and will now start distributing loan waiver certificates — probably just in time for the Lok Sabha elections.

What is worrisome to economic experts is the enlarging liabilities of States to their gross state domestic product (GSDP) — above 25% with Punjab at a high of 33% and MP exceeding 25%.

Ironic but true, experts are on record that “farm loan waiver” is at the cost of good economics. Its long term adverse effects both on the farmer and banking sector are real. NITI Aayog has been opposing farm loan waivers is, if you look at the percentage of farmers who have any outstanding loans from institutional sources, it is not even 50 per cent. So, you are spending lakhs and crores of rupees and not even half of the farmers are benefiting.

Most important, “farm loan Waivers” is a state government (prerogative) whether you want to give a farm loan waiver, since agriculture is a state subject. No point in blaming Modi-led NDA central government. What is absurd is that in many states not even 25 per cent of the farmers are benefiting.

In sum, what is urgently needed is a holistic review of “Agricultural” policies. The Government must order either a Parliamentary Committee or a Experts Commission to undertake a de novo holistic review on “farm loan waiver” based on criteria and conditions specific to each region and category of farmers.

All political parties must stop indulging in “farm loan Waivers” as the panacea to overcome “Farmers Distress” as a means to polarize farmer’s vote banks.

High time to stop the fraud committed by political leaders in the name of real “small and marginal farmer” and tenants by farmer’ lobbies with political clout and patronage. If the farm loan waiver politics are not stopped by appropriate policies and strategies, the scope of economic growth and development will stunted even in posterity.