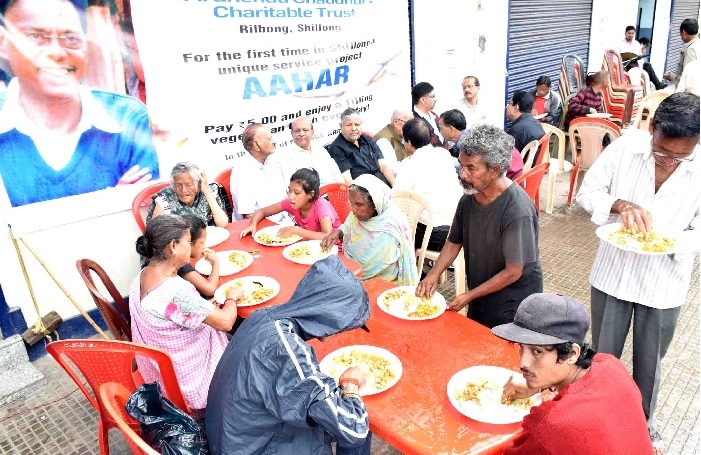 Charity begins at home. But when that charity stands up and steps out of the threshold of a home, it definitely brings comfort to the deprived. Then, the true love for humanity begins to take root. Only then does compassion and love find their better expression. One starts to feel a better “human” whispering from within. Inner satisfaction out of the act of charity always makes one feel overwhelmed with a good amount of happiness. This is how one can fast cleanse oneself of the worldly toxicity has been just gathered all through. No amount of money held with a tight-fist has ever helped anyone to become good in life. The virtue is earned only by giving away, by being generous and kind.

All should thank the Ardhendu Charity Trust that has taken to practicing what it preaches. This TRUST, which is initiated by a former Minister Manas Choudhari, is now feeding minimum 200 hungry mouths at Jhalupara, Shillong-2, daily. How people wish blessings upon the TRUST is beyond the materialistic calculation. But what is very clear is that many people have already learned from the TRUST how to make one’s life more meaningful. It has quite awakened the spirit of benevolence in many which otherwise has been just lying dormant. This adds to the positive vibes in society. Lot many individuals have come forward to pitch in for the service of filling the empty stomach.

The enlightened sages assert that amassing fortune has no value if the major part of it has not been used for the betterment of the society and the environment. In a practical sense, we are heavily indebted to the Mother Nature. So, only by generously giving away a part of our wealth towards the righteous causes do we become free from that “debt”. Just imagine what would have happened if we had to buy “air” from the laboratory. Could each individual be able to buy air without which we can’t survive even for 2/3 minutes? We get it all for free. Similarly, we get water; we get all food products grown out from this amazing earth. What would we do if from tomorrow all such nourishing plants, grains, and cereals stop growing! We will just die of starvation. We can’t eat mud and stone for a living. So, we can thus imagine how we “owe our survival” to every part of the Mother Earth; the entire NATURE. So, by exercising the charity we clear the “debt” and also clear out the accumulated dirt from our mind set.

However, there is a bottom-line and a complete no-no in charity. Here is where many just fail and fall down tumbling and become too small. That is an “expectation of return” after the charity. There is no any greater “eyewash” than this. This is indeed “dealing”. ‘Philanthropy with eyes set on favors from beneficiaries is like a trade’, says Vivekananda in his speeches. It will not reap the spiritual benefit at all. It rather stifles the soul from breathing the air of virtues. So, let our souls breathe easy now and hereafter.

No dead person has carried his/her accumulated wealth to the graveyard; charity is one of the best pathways to HIM.