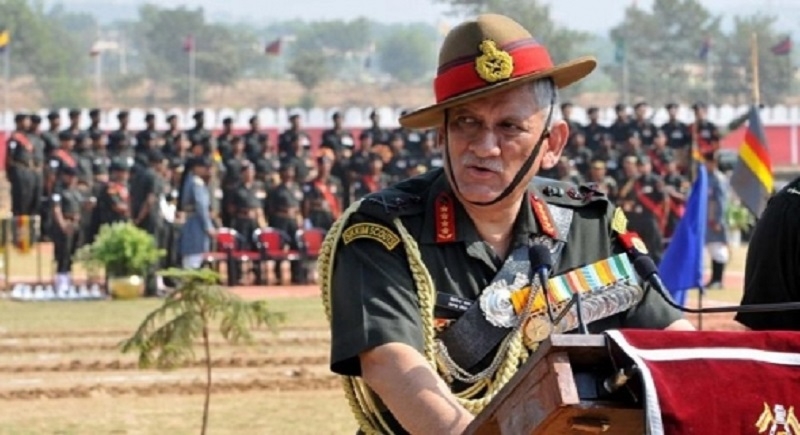 Quite disturbing it is to note the high decibel visual media cacophony and print media opinion columns over General Bipin Rawat’s speech at Delhi in a seminar on North East Region of India – Bridging Gaps and Securing Borders hosted by the Center for Joint Warfare Studies (Think Tank) and Integrated Headquarters of the Ministry of Defense.

At the outset, criticism leveled against General Bipin Rawat advising him to exercise restraint and keep away from making political statements mercilessly exposes intellectual bankruptcy of his critics.

To expect either Modi or Rahul Gandhi and others to be fountainheads of national security wisdom sans practical exposure at functional or directional level or with “boots on the ground” or professional grooming attending programs is patently unfair.

Stating the obvious, national security is a specialized subject covering political, social, economic, technology and defense dimensions. In classical war fighting against external adversaries, the inherited classical ethos of civil-military affairs is based on strict dividing line between political and military establishments. In such scenarios, Generals followed higher political directions.

No national security strategy paper has been published during the past 70 years. Despite the appointment of “National Security Advisor” for the first time in 1998, yet no strategy paper has been published despite elitist names like Brijesh Mishra (IFS), J N Dikshit (IFS), M K Narayanan (IPS), Shiv Shankar Menon (IFS) and Ajit Doval (IPS). Total voids exist. Is it due to total incompetence at the highest policy or higher direction levels?

Meanwhile, revolutionary shifts in nature of warfare and violence under the rubric of “Hybrid Warfare” have taken place with political warfare emerging into the forefront in the post Cold War scenario. Those who cling monotonously to archaic classical national security theories and policies, therefore, fail to keep abreast with the shifts vital in “Civil-Military Affairs.”

Over the past three decades, more disturbingly, armed forces have been inextricably entangled in J & K in a conflict dominated by non-state actors shaped by radical religious ideological extremism abetted by non-state and state actors (Pakistan and China)" and other adversaries in order to carry out a new and different kind of warfare – proxy or hybrid war.

Pakistan, for instance, utilizes a range of means to pursue its interests, such as proxy war (increasingly active in supporting state and sub state actors), covert and overt actions like cross border/LoC raids and psychological warfare.

Surely, all politicians alike failed dismally to stop the nefarious activities to dramatically change the demographics in Assam and even West Bengal. And, the so called liberal ideologues lent their support to contra national security interests by such political parties. Why? For them, national security interests are least concerns. Their sole obsession is to somehow grab power.

Why the media is not blaming successive regimes’ silence over such national security threat concerns instead of decrying General Bipin Rawat’s strategic assessment? Are the media houses not expected to be “watch dogs” to provide a balanced coverage of such key developments?

People also must accept the reality that fighting insurgencies/transnational terrorism is most vexatious, where population pressures and unemployment, ethnic and sectarian differences, critical problems in politics and governance, and failures to meet basic economic needs are key elements of the conflict.

None can deny that the Indian Armed Forces have learnt many lessons in countering/marginalizing insurgencies, left extremism, terrorism and other forms of violence – low intensity conflicts/ situations short of war - in the internal context and content.

Surely, there is a need to build on the military lessons learned from their "long internal conflict situational awareness” based on ground realities. Never too late to integrate military efforts with new civilian efforts that address the rise of extremist ideologies and demographic transitions that is the primers of internal civil conflicts/wars. It involves revolution to wage different kinds of wars particularly in the “information warfare domain”.

In 1994, late General Bipin Joshi while addressing the IPS probationers at the National Police Academy, Hyderabad, invoked the phrase “Islamic Crescent Envelopment of India” clearly highlighting the dramatic demographic transitions in the Northeast and the SIMI/ISI sleeper cells in Hyderabad and Kerala. Of course, there were no media representative and TV “Dog” journalists (Karan Thapar’s latest jibe against his own brood) covering the event.

Truth is always bitter; and difficult to swallow, particularly by intellectual status quoits and political frauds. No point in drawing late Field Marshal Maneckshaw’s advise to Indira Gandhi to keep off his professional domain in external threat scenario. Had he been alive today and entrusted with internal security threat management, he would have been more candid and forthright in highlighting political and bureaucratic incompetence.

Insisting on strictly maintaining “apolitical nature of armed forces” whilst continuously employed in “hybrid Warfare” is the most heinous fraud committed on “We the People of India”. Also, the concern of India’s delicately balanced diplomatic relations with neighbors cannot be viewed as detrimental to national security interests.

Viewed in the holistic national security interests framework and in the face of vicious political blame games indulged be decrepit leadership hell bent upon perpetuating their rule, Army chief General Bipin Rawat’s plain speaking about an “inversion in demographics” and a “planned migration” from Bangladesh into the Northeast must be warmly appreciated; but not decried as unusual.

In retrospect, I find fault with General Bipin Rawat’s suggestion to amalgamate the illegal migrants into the mainstream instead of isolating pushing them back to their own lands. Amalgamation would ultimately result in demand for merger of Muslim majority districts with Bangladesh – “Greater Bangladesh”.

In my books “In Search of National Values – Withering Secularism, Democracy and Socialism” published in 1994 and “Nation in Crisis – Dimensions of National Security and Terrorism” in 2001, and various articles published from time to time, I had forewarned about the demographic transitions leading identity crises in the Northeast region thereby resulting in grave long term national security concerns.

In recently published article, I had highlighted the average annual population growth rates in Assam since 1971 to include: 35% in 1971: and 22% as per reports in 2000 AD. Indigenous groups will face identity crises. The population trends in sensitive strategic states along our borders, particularly in the Northeast are a major cause for strategic concern.

Also, there is growing apprehension that it has already paved the way for peaceful Islamic Crescent’s conquest of Assam and West Bengal. There are a large number of anti social elements and potential fifth columnists, who are infiltrating in the garb of immigrants. Until illegal migrations are halted, identity crises, communal violence, eradication of poverty and illiteracy may remain enigmas. And, the strategic significance of Siliguri Corridor is well known.

Indian politicians excel in creating crisis and employing the armed forces to save them. If political leaders cutting across party lines and media fail to highlight the developing national threat concerns to “We the People of India”, someone else must “bell the cat”. Armed forces that are today largely doing fire-fighting of internal security threat envelopment which CONSTITUTES the key part of national security interests cannot but help voicing their concerns in public.

In retrospect, the Chief of Army Staff's, in future, must transparently tell or predict to "We the People of India" about the nature of internal security threats in being and in making. Enough is enough of delicate Civil-Military relations, which is self inflicted imposition - intellectually absurd and fraud.

I fervently appeal, particularly to “Barking Dog Journalists” crying foul over General Bipin Rawat’s views to introspect and recover “watch dog journalism” ethos and provide a ‘balanced coverage’ of demographic transitions in the Northeast region and explain the reasons thereof and their fallout on national security interests.

Print media editorials too must take into consideration the "dramatic and revolutionary" changes in geo strategic environment and the onslaught of political warfare. Also, they must review relevance of the much touted delicate civil-military relations in a democracy in such an environment?

“Generals win battles; political leaders lose wars” is a euphemism, which is quite relevant in India’s context and content. And, it goes back to Indo-Pak war 1947-48 followed by 1965, 1971 and Kargil wars/conflict. Its reason is simple. Political leadership thought of no end of them and failed to call upon the national security wisdom that is available with military professionals – past and present. Unfortunately, military professionals, in pursuance of their apolitical status, kept silent to expose decrepit politicians publicly airing strategic assessments.

Factually, civil–military relations are an interdisciplinary area of research, reflecting the work of political scientists, military, sociologists, and historians. History and culture, the constitution of the state and the statutes and practices arising there from, changes in the international security environment, technology, the character of conflict, and the changing concept of “soldier-hood” all influence the civil–military relations of a state.

There are many possible patterns of civil–military relations that provide different answers to the questions of who controls the military and how, the degree of military influence appropriate for a given society, the appropriate role of the military in a given polity, who serves, and the effectiveness of the military instrument that a given civil–military relations produces. Moreover, there is no “general” or “unified field” theory that successfully explains all of these patterns. More dilemmas persist that remain unresolved.

If earnest, columnists must carry out in depth study of the history of civil-military relations that can be traced to the writings of Sun Tzu and Carl von Clausewitz, both of whom argued that military organizations were primarily the servants of the state. Two brilliant works that disagree but encompass the most penetrating assessment of the military profession in a turbulent age are available in public domain.

Samuel Huntington's institutional theory remains the dominant paradigm for examining civil–military relations. Huntington prescribes “objective control” as the optimum form of civil-military relations. This form of civilian control achieves its objectives by maximizing the professionalism of the officer corps to include its autonomy within a clearly defined military sphere. When it comes to the question of civilian control of the military, Peter Feaver’s agency theory corrects some of the flaws in Huntington’s theory.

Morris Janowitz and the military sociologists also provide useful insights, especially regarding the question of who serves and related issues. Janowitz argues that officership has undergone a fundamental transition to what he calls a "constabulary" model, that is to say, increasing resemblance to police forces, which organize and apply violence in tightly controlled and limited circumstances and retain close links with the society they protect.

After the end of the Cold War, the Postmodern Military Model predicts the course of civil-military relations. The hypothesis argues that the military was moving away from an institutional model towards one that was more occupational in nature. An institutional model presents the military as an organization highly divergent from civilian society while an occupational model presents the military more convergent with civilian structures. Factually, the military was never "entirely separate or entirely coterminous with civilian society" and the seven decade involvement in internal security roles have changed interface between the armed forces and society.

The key lessons of Vietnam war include: Big Money and Big Armies cannot win wars; and the USA lost because of unnecessary civilian meddling in military matters. Military professionals argued that the civilian leadership failed to understand how to use military force. It implies “mere appeasement based on vote-bank politics cannot effectively counter “Hybrid Political Wars” and win them.

At the same time, the military cannot continue to be an organization with unmatched institutional reach and political influence, while limiting state capacity, because in doing so it will be ever more challenging for civilian supremacy to take a stance.

To sum up, for stable and efficient civil-military relationships to cope with the extraordinarily complex and dynamic “New strategic and operational environment”, the need for a new paradigm – Revolution in Civil Military Affairs – is an imperative. What should be the new paradigm must be reformulated by extensive deliberations by calling upon the national security strategic wisdom available with past and current professional in all fields.