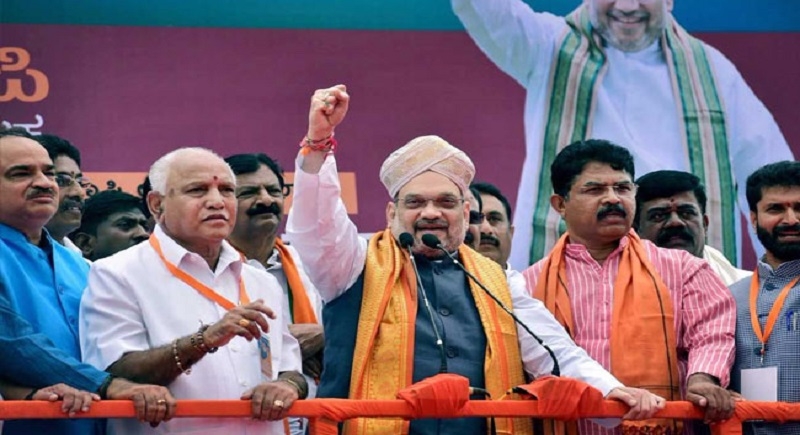 For the Bharatiya Janata Party (BJP) the elections in Karnataka, the only Southern state it held in 2008 after independence, the electoral battle of 2018 is most important from the 2019 general election point of view. The spectacular victory the party registered in the north-eastern state of Tripura giving a crushing dust biting to the Marxist, Now Karnataka offers an opportunity to the party to repeat the same performance in sending the Congress packing out of the state lock, stock and barrel.

The million dollar question however, is will the BJP be able to accomplish this task?

The Election Commission has announced the poll schedule for the state. According to the schedule the election to all 224 assembly seats will be held on one single day i.e. on May 12; counting of votes and announcement of results will be done on May 15 and the complete process of elections will be completed by May 18.

The notification for the election will be issued on April 17. The last date for filing nominations is April 24; scrutiny of the nominations will be done on next day and names can be withdrawn by April 27.

The BJP had won elections in Karnataka in 2008 under the leadership of B S Yedyurappa, the powerful Lingayat leader with the highest tally of 110 MLAs while the Congress had to satisfy at 80. However, in 2013, the Congress bounced back with 122 seats pushing the BJP to second position with a tally of 40 seats. But in the 2014 Lok Sabha polls, the BJP again scored leads in 132 assembly segments taking its vote share to 43.4 percent.

The Congress has been on the downslide since 2014 exceptionally for some by election victories here and there. But most states, almost all, elections to which were held after 2014 in all corners of the country, the party under the leadership of ‘Shahjada’ Rahul Gandhi had to bite the dust very badly. Now Karnataka is the only hope for them to survive as a premier political party. But the way Siddaramaiah government was functioning it seems a difficult for the Congress party to retain its only bastion in the country.

For the BJP winning this election is the most important task as it will have its shadow on the forthcoming assembly elections of three BJP-ruled states of Chhattisgarh, Madhya Pradesh, and Rajasthan and of course the 2019 Lok Sabha elections. The party leadership is not leaving any stone unturned and fully concentrating on the campaigning in Karnataka. Prime Minister Narendra Modi had addressed more than five meetings in the state boosting the morale and enthusiasm of the party cadre. BJP President Amit Shah is also campaigning in the state besides minutely planning strategy to win the elections. 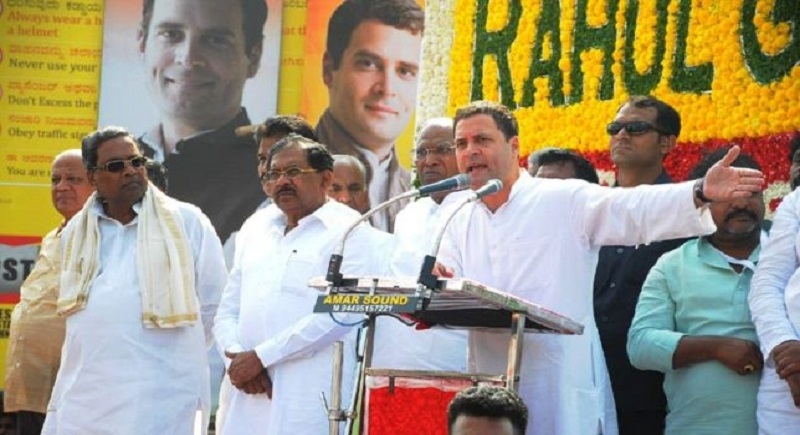 Congress has only Rahul Gandhi to campaign and he is doing his best by visiting mutts, temples and ashrams to woo the Hindu voters; going to mosques and churches to win over the Muslim and Christian voters who were the traditional vote bank of the Congress party. The stakes are high for the Congress President, for he will have to prove that the ‘best’ performance of the Congress party in Gujarat assembly elections was not due to local factors and prolonged anti-incumbency mood of the electorate. Rahul will have to prove his ability in Karnataka also, especially when the Chief Minister Siddaramaiah had declared that this election is the straight contest between ‘communalism’ and ‘secularism’.

Congress is mainly adopting the policy to drive wedge between the majority Hindu voter by resorting to ‘divide and rule’ policy. Its decision to declare ‘Lingayat’ as a separate religion is an example to sustain this allegation. Siddaramaiah has also created a separate flag of Karnataka state which is seen as against the tenets of the Constitution. Both these decisions are pending for the approval of the Central government; the Congress party believed that they have paid their dividends irrespective of centre’s approval or rejection.

In fact, it is the Congress party that indulged into such divisive politics to further its power politics and to retain its political clout. Siddaramaiah comes from an OBC category and he is trying to garner the support from other backward class voters. Pampering minorities (read Muslims) and Christians is another policy of the party.

The recent efforts to form a third front of regional satraps of parties of different hues may influence the elections in this southern state. Mamta Banerjee, who took the lead in formation of such a front, does not have much political influence in Karnataka or any of the southern state. Same is the case with leaders like Sharad Pawar and others. Given this situation, it seems difficult for the proposed third front to make any dent into the BJP’s prospects. However, it may eat into the share of Congress votes.

The Janata Dal (S) headed by former Prime Minister H D Deve Gowda is another factor that needs to be considered while discussing the election prospects in Karntaka. Though a distant political challenger, JD(S) has already given signals against joining the third front which means the party will put up its candidates making the contest multi-cornered.

The BJP’s old war horse B S Yeddyurappa had been instrumental in party’s victory in 2008. But he fell away from the party, formed his own Karnataka Janata Paksha and played spoilsport for the BJP in 2013 elections paving the way for the Congress victory. However, realising his mistake, he returned to the original party and helped the BJP win Lok Sabha elections in 2014. The BJP leadership thus, concluded that the party can win with the stewardship of veteran like BSY.

The 2019 Lok Sabha elections are still far away and Karnataka is not the last election before that, as three more states will be going to polls in the end of this year. But the elections of Karnataka Assembly are considered most important in the run-up to 2019 and of course for the elections of the three BJP-ruled states. BJP must snatch victory from the Congress to continue its winning spree and in the fulfilment of its “Congress-Mukt Bharat” mission. As for the Congress it will be another litmus test of Rahul Gandhi’s leadership and capability as a good steward for the party.