“This far and no more” message for misguided youth of Kashmir

The recent two-day visit of Union Home Minister Rajnath Singh to Jammu and Kashmir has been significant. Ostensibly, the objective was to assess the security situation post the unilateral suspension of operations in the holy month of Ramadan, taken by the centre at the behest of Chief Minister Mehbooba Mufti. 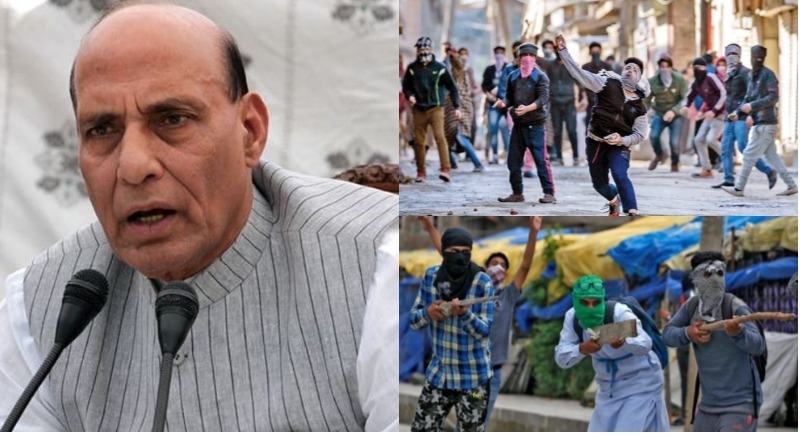 The Home Minister had a packed schedule that included, apart from discussions with political leaders and field commanders of the paramilitary forces, interactions with the sportspersons of the state and the border residents who are facing the brunt of incessant shelling from across the border.

The Home Minister chose to remain silent on the impact of the suspension of operations initiative and the possibility of its extension to cover the period of the Shri Amarnath Yatra. He instead chose to address a number of other issues that, experts believe, will guide the Kashmir policy of the centre in the run-up to the 2019 elections.

The Home Minister primarily focused on the youth of the valley! Delighted by the interaction with sportspersons, he commented that the youth of the state would rewrite the history not only of the state but the entire country. He justified the withdrawal of cases against the stone-pelters on the premise that they are young and prone to misguidance by anti-national elements. He reiterated the commitment of the centre to explore avenues of employment and job opportunities for the Kashmiri youth, especially so, in the paramilitary forces.

He assured the border residents an urgent address of their security concerns by a building of bunkers and provision of bulletproof vehicles. He lashed out against Pakistan for incessant ceasefire violations and nurturing of terrorism on its soil.

The visit of the Home Minister and its fall out has been keenly commented upon. The possibility of extension of the suspension of operations (ceasefire) is being viewed with concern by many defense experts.

Col. Jaibans Singh, a reputed security analyst with a keen interest in Jammu and Kashmir affairs, expressed reservation on the government policy in a programme named “Insight” on Lok Sabha Television (LSTV). While agreeing to the need of giving the youth a chance to shun the misguided path of violence and stone pelting, he expressed a fear of the stone pelters taking undue advantage of the well-intentioned policy of appeasement. He warned against the creation of an environment wherein stone pelting graduates from a level of a small scale industry into a “Multi-national Corporation.”

On the issue of reduced violence levels during the period of ceasefire Col Jaibans Singh opined that the acid test would lie in a reduction in the number of people pursuing the path of terrorism. The aim of the initiative was to reduce recruitment in the terrorist cadre, if that is not being achieved then there is no need to extend it further. If intelligence reports suggest that recruitment in the terrorist cadre is unabated then counter-terrorism operations under Operation All Out would need to be reactivated without delay to ensure that the number of operational terrorists does not increase to an unacceptable level.

The nation is in concurrence with the Home Minister euphoria on witnessing firsthand the love for sports that the Kashmiri youth are exhibiting. However, channelizing the youth onto the arena of sports alone cannot resolve the complex Kashmir issue. It may be a good first step but it cannot be considered to be holistic. A more important factor here is the need to bring about a change in the mindset of the Kashmiri people in order to leverage benefits that build up from sports and such like activities. Sports are a good means to an end but not an end by themselves.

The Home Minister has promised provision of special employment avenues to the youth of Kashmir; this amounts to the creation of yet another set of reservations where an entire region would get undue advantage. The interest of the youth of Kashmir would be better served by their facing all such trials and tribulations that other people of the Indian Nation are facing in their day to day existence. They should neither seek and nor be provided any such facility that reinforces in them the notion that they are different.

It should never be forgotten that in the nation has to contend with powerful and determined foreign forces which are always poised to portray the government’s humane gestures as a sign of weakness. These foreign forces will definitely attempt to leverage this “weakness” in furthering of their very sophisticated psychological campaigns. It could well become a tool for indoctrination of the youth on to the path of terrorism on the premise that victory of the so-called Jihad is just around the corner.

While maintaining the positivity that the government is so determined to imbibe in its Kashmir policy, there is a need to closely monitor the situation and react before it flips into the negative mode and gives an advantage to the divisive agenda of the enemies of the nation.

There are no two views about the good intention behind what the Home Minister has articulated as the plan of the Union Government to bring a turnaround in the debilitating conditions that have engulfed Kashmir for many decades now. Ideally speaking there is every reason to be hopeful, however, in view of the complex emotions that guide the environment in the valley, caution and deep though in the implementation stage would be advised.

The government needs to give a strong message that it is ready to pursue a humane policy but the same would not be at the cost of national security and integrity. Having taken the first step, it should make it known that it expects reciprocation through tangible changes on the ground. A “this far and no more” message should be followed by such decisive action that keeps national interest supreme.

(Dr. Simrit Kahlon is an academician and geo-political analyst)