“If BJP wins in 2019, the BJP-RSS idea of a “Hindu Rashtra”, will tear apart the Constitution, and India will become a Hindu Pakistan” stated Shashi Tharoor, Member of Parliament of Congress Party from Kerala, former diplomat and an accused in abetting murder of his wife Sunanda Pushkar out on regular bail. 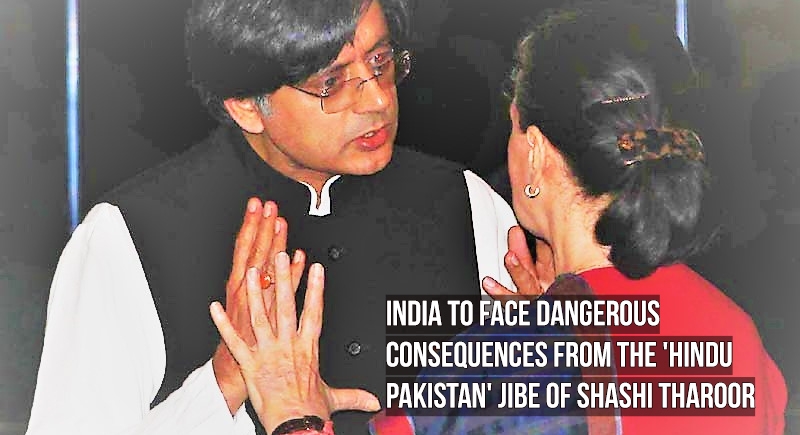 Furthermore, Jammu and Kashmir Deputy Grand Mufti and vice-chairman of State Muslim Personal Board, Mufti Nasir-ul-Islam, had been reiterating his call for Muslims to secede from India.

Furthermore, it is also worthwhile to note that the former Vice President, Hamid Ansari, has also come out with quite a few caustic anti-BJP remarks.

Let none suffer from illusions that Shashi Tharoor is an intellectually arrogant and egocentric person who has scant concern for the fallout of his taunting provocative statement. Is the statement made to divert the attention of gullible people from the criminal proceedings but also gain sympathy from his followers to rally support to bail him out of the case?

Such statements by the Congress Party leaders coinciding with informal meetings with Muslim clerics feigning as political leaders are good enough to rally all Hindu’s under the BJP umbrella.

Although the Congress Party issued a statement asking its leaders to choose their words more carefully, the damage has been done to polarize communities on religious lines.

Naturally, the reaction of the BJP-RSS-VHP-Bajraang Dal will be to exploit the provocation to promote and consolidate Hindu polarization.

The real concern of majority should be peace and stability of India. Such highly irresponsible statements by eminent opposition party leader may trigger communal conflagration in posterity.

The Indian State is just about managing to keep the lid on “Communal Tinder Box” that can blow up anytime.

Populist political opportunists are everywhere in the country. The sole pursuit of such leaders is to somehow remain relevant in the race for power.

So, leaders out of power like Rahul Gandhi, Shashi Tharoor and so on are hell bent upon invoking acrimonious innuendos against their rivals with utter disregard to their adverse fallout on national security interests particularly survival of democracy even in its present state of mutilated and distorted form from its original conception.

Under such oft repeated provocative statements, one cannot dispel the possibility of strong revival of “Hindu Rashtra” demand considering the “Islamist Radical” threat envelopment, particularly when viewed from the dismal state of Hindu minorities in neighbouring Pakistan and Bangladesh.

Just like the struggle between Jinnah and Nehru in pursuit of power resulted in partition of British India in 1947 that resulted in human genocide, none can rule out the possibility of yet another human genocide what with Hindu’s demanding all Muslims with transnational loyalties to ‘quit’ India and go to Pakistan and Bangladesh.

Watch out political leaders of modern India! Lest another communal volcanic eruption engulfs India in posterity, time for political leadership and parties to stop the never ending “pseudo secular, secular and communal” invocation as means to gain political ends – power at all costs.