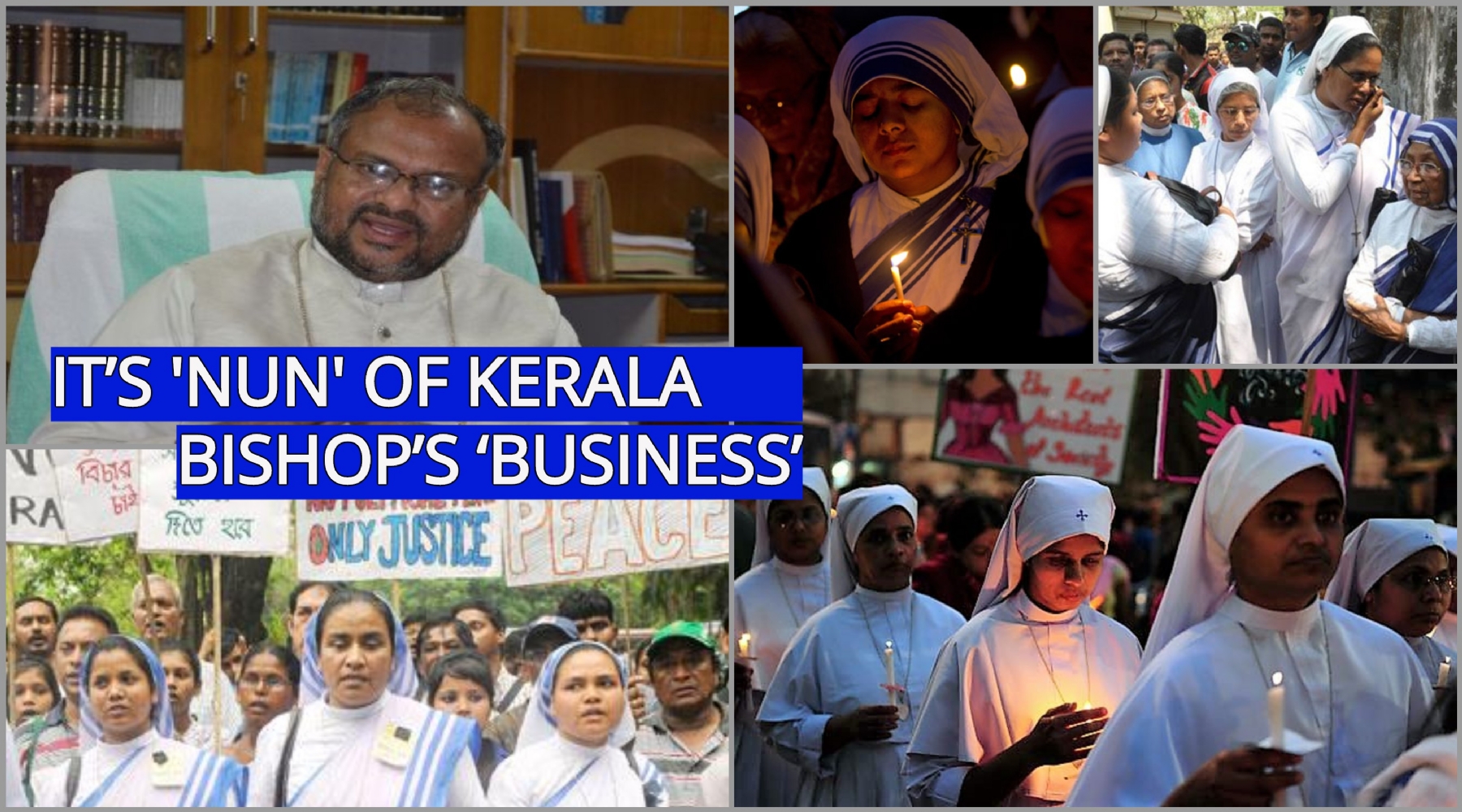 Once a Bishop was asked as to what is his obsession and innocently he replied ‘none’. But the questioner understood it to be ‘nun’. Joke apart, this has become a stark reality for the Kerala Catholic Bishop right now.

Two incidents came to light exposing this sorry state of affairs involving the ‘Men of God’ in the worldly carnal desires and stooping too low to play with the dignity of women to satisfy their lusts.

In the first, a nun of the Kerala church has filed a police complaint against the Catholic Bishop accusing him of sexually exploiting her. In her complaint the nun alleged that Franco Mulakkal, Bishop of the Roman Catholic Diocese of Jalandhar had exploited her sexually for years!

The nun, staying in a convent at Kuruvilangad, had raised allegations that the Bishop had first molested her in May 2014 at a guest house in Kuruvilangad and then this continued for years. The nun belonged to an institution that functions under the Jalandhar diocese.

This allegation from the nun has put the Syro-Malabar Church of Kerala and the Catholic Church in India as a whole in a tight spot.

Before approaching the police, the hapless nun complained to the Church authorities but they refused to entertain her which forced her to move to the Kottayam district police bringing this whole ugly incident to the light.

Sensing trouble, Bishop Mulakkal too, ventured to file a complaint against the nun to Kottayam SP alleging that she was ‘blackmailing’ him after he initiated a ‘disciplinary action’ including transferring her from the present institution. She refused to obey the orders and now indulging in levelling baseless allegations and blackmailing him, the Bishop said in his complaint.

According to New Indian Express, Bihsop Mulakkal said that the family members of the said nun had also threatened to entrap him in a rape case if he did not withdraw his order. Police confirmed receiving the complaint of the Bishop first and that of the nun a couple of days later. Kottayam SP Harisankar confirmed that he has received both the complaints and directed the Dy SP level police officer to investigate into the allegations.

Meanwhile, in another incident five Kerala Christian priests were alleged to have ‘blackmailed and sexually abused' a married woman. The church’s working committee member and priests’ trustee Father M O John said an inquiry panel had been formed to look the allegation against the five priests.

The five priests belonged to the Malankara Orthodox Syrian Church in Kerala and they were ‘sent on leave’ on Monday pending an inquiry into the allegation. What is more that this blackmailing and sexual exploitation of the woman was going on for a few years!

The church’s working committee member and priests’ trustee Father M O John said an inquiry panel had been formed to look the allegation against the five priests, who were working with the parishes under four diocese of the Kottayam-headquartered church. One of the priests belonged to Delhi diocese of the church.

“The five priests… have been asked to keep away from officiating all priestly duties and function as head of parishes. They are not under suspension. Their fate would be decided only after the inquiry report,’’ said Fr John.

Confession is that process in Christianity by which an individual can seek God’s pardon for the sins he or she commits in the course of time. They confess to their sins in presence of a priest or a father who acts as a mediatory between the individual and the GOD in the name of Jesus the Saviour.

But little did this poor woman know that the confession of ‘sin’ made by her would be used by the same priests to exploit her sexually for years! But this happened and it was brought to the notice by none other than her husband!!

In a letter to the church, the woman’s husband alleged that his wife’s confession to one of the priests, supposed to be kept a secret under church rules, was used to blackmail her. The complainant mentioned eight persons in the letter to the church, but sought action against only the five priests.

In an audio clip, purportedly between the woman’s husband and another official from the church that was leaked in social media a few days ago, the complainant was heard saying: “A priest had abused her (his wife) before the marriage. Later, when she confessed the pre-marital affair, that priest (who heard the confession) exploited her, threatening that he would reveal everything to me. Again, that priest handed over her to another priest, blackmailing her using the photographs.’’

The woman’s husband was also heard saying that he has been facing pressure from even celebrities within the church to withdraw the complaint. Fr John, however, said the complaint did not deserve a police probe. “In the complaint, the husband said one priest had abused his wife 380 times. Then, what they were doing until the figure reached 380. That is why the husband was not keen to move a police complaint,” he said, adding there was no substance in the allegation that the woman was trapped during confession.

Sexual exploitation in the Catholic Church is a worldwide phenomenon. The Church all over the world, including the Church of India, has been witnessing a spate of incidences of sexual abuse or exploits by the clergy involving priests and bishops. The Church officials of very high order had confessed to its existence and even paid compensation to the victims of sexual abuse by the priests or clergy. 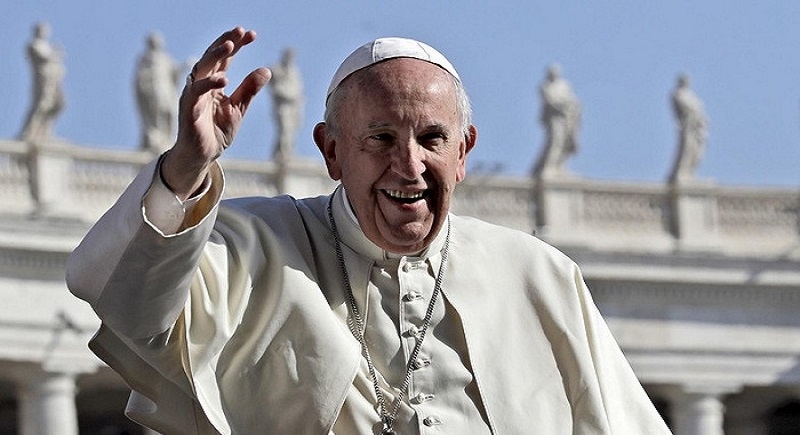 Pope Francis had said that there was no evidence in such cases. But Bishop of Chile is accused of covering sex crimes in Chile and the Pope is caught in major flak for accusing the victims of slander against the Church.

The Catholic Church in Australia revealed that in 2017 it has doled out around $213 million as compensation to sex abuse victims within the Catholic fold. Not only this, a New York Church had to mortgage its property to the tune of $ 100 million loan to settle the abuse cases. A diocese in Montana has gone bankrupt in buying silence of hundreds of such sex abuse victims of the priests. And yet the whole truth is still awaited!

See, even after the media exposure of these Kerala sex abuse cases involving Church Bishop and priests, there is no reaction from the so-called progressive, intellectuals, seculars, and their media co-travellers in India. Had it been a Hindu priest, sadhu or a sanyasi, this gang would have pounced on him with all its might. But here they are criminally silent.

And you, O’ reader, know the reason for their silence very well. Amen.