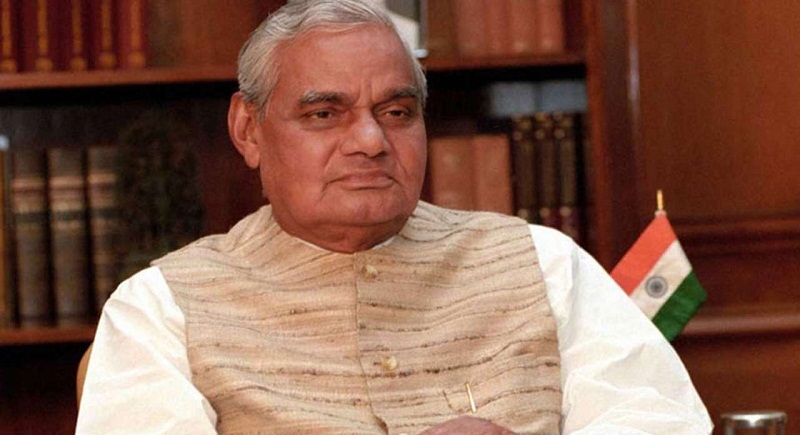 Some people are born with silver spoon in their mouths but some reach the top positions by sheer dint of their hard work and toil. And after scaling that great height they do not detach them from the ground. Atal Bihari Vajpayee was one such great personality of our times that always remained glued to the ground no matter the heights he scaled in his political career spanning several decades.

Born in a teacher’s family in Gwalior on December 25, 1924, Atalji did his schooling and graduation from Gwalior’s Victoria College and post-graduation from Kanpur with first division. He came in contact with the then Rashtriya Swayamsevak Sangh (RSS) pracharak late Narayanrao Tarte, who went to Gwalior to start RSS shakha, and joined the Sangh in 1939. Later he completed the RSS training and devoted some years as RSS pracharak. He worked with Pt. Deendayal Upadhyaya and assisted him in publication of “Rashtradharma” Magazine, ‘Panchajanya’ weekly, Swadesh and Veer Arjun dailies published from Lucknow.

After the first ban on RSS was lifted, some of the best swayamsevaks were deputed to assist Dr Shyama Prasad Mookherjee who founded the Bharatiya Jan Sangh in 1951. Atalji was one amongst them. Soon he became close to Dr Mookherjee. Unfortunately, Dr Mookherjee died in mysterious circumstances in Srinagar and after his death the mantle to raise Jan Sangh as an all India political alternative fell on the shoulders of Nanaji Deshmukh, Balraj madhok, Deendayal Upadhyay, Atal Bihari Vajpayee and others.

They were young, and as compared to the Congress stalwarts, were political novices. But that did not deter them from their determination and resolve to make Jan Sangh an all India party that could provide a viable alternative to the Congress. Even Prime Minister Pt Nehru had acknowledged the talent in Atal Bihari Vajpayee from the speech he made in the Lok Sabha to which he was elected ten times from 1957 till he retired last in 2009.

Atalji was member of the Rajya Sabha too twice and headed the Bharatiya Jan Sangh from 1968 to 1972 following the most untimely death of Pt Deen Dayal Upadhyay.

During the Janata Party rule, Vajpayee was made the Foreign Affairs Minister and his tenure was the best period when India had most cordial relations with its cantankerous neighbor on the western front. Not only this, he was selected by the then Prime Minister Narasimha Rao to lead the Indian delegation to the UN to foil Pakistan’s designs to rake up Kashmir issue on the international forum despite reservations being voiced from various quarters within the Congress itself. Vajpayee did his job so well that Pakistan could not achieve what it wanted to in the UN then.

Atalji was the first non-Congress Prime Minister to serve the full term in the office, first for just 13 days in 1996, then for 13 months from 1998-99 and later for full term from 1999-2004. His period as Prime Minister was the most testing for any politician. Anh it was Atal Bihari Vajpayee who could manage to take along with him as many as 24-political party coalition government and that too smoothly. This is the miracle in the contemporary Indian politics. This was possible because of his accommodative personality and approach to take all into confidence.

The most remarkable event in his tenure was the Pokharan II in 1998. Indira Gandhi did conduct the Pokhran I in 1974 but that was for a peaceful use of atomic energy. The Pokhran II was aimed at making India capable of handling atomic missiles and also utilizing energy for development purposes. The Indian scientists did accomplish that difficult job with such a precision and secrecy that even the US satellites could not detect the activity. With Pokharan II India invited the wrath of the US and other nuclear nations and the US also put some harsh economic sanctions but Vajpayee did not budge from his stand. His resolve and determination and his appeal to the people forced the US to withdraw the sanctions later.

The Janata Party experiment did not last long. The erstwhile Jan Sangh leaders had to come out of it but there was no going back. Vajpayee took the lead in presenting the Jan Sangh in its new Avatar of Bharatiya Janata Party (BJP) in 1980 and made it all encompassing, accommodative party of the people of India. The BJP could secure only two seats in the 1984 elections to the Lok Sabha but it sprang to life like a legendary Phoenix and captured power at the centre in 1996 and with firm majority in 2014. This is the paradigm shift in the Indian politics and the credit for this goes to Atal Bihari Vajpayee.

Vajpayee was gifted with extraordinary oratory and poetic skills which made him the most popular leader with all India acceptability.

During the 1975 emergency he was incarcerated with Lal Krishna Advani and other political leaders in Bangalore jail. But the emergency did not deter his spirit. He wrote his famous poems there and later played the most vital role in defeating the Congress from the Hindi heartland. However, the Janata Party experiment did not last long, due to personal ego clashes and vested interests. Nonetheless, it opened the doors for coalition politics in India later.

He was conferred India's highest civilian honour, the Bharat Ratna, by the President of India in 2014.It was declared by the Modi government in 2014 that Vajpayee's birthday, 25 December, would be marked as Good Governance Day.