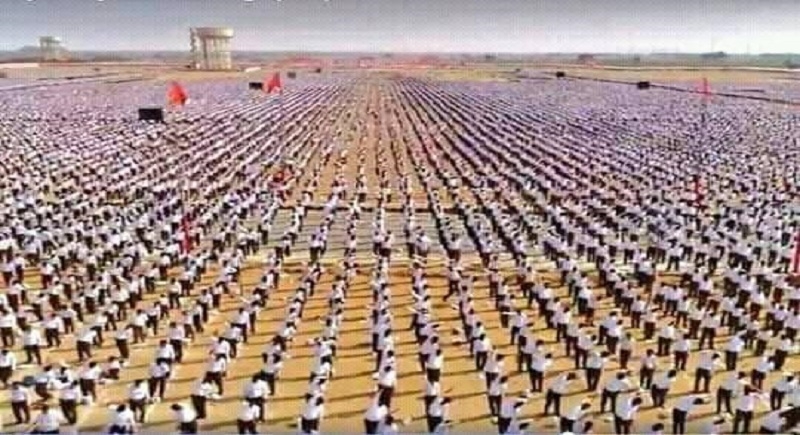 Comparing Rashtriya Swayamsevak Sangh (RSS) with Muslim Brotherhood only reflected the political immaturity of Congress President Rahul Gandhi. The RSS talks of Hindu pride but it is not anti-Muslim or anti-Christians. On the other hand the RSS considers all Muslims and Christians in India as Indians by ancestors, motherland and culture, and the Sangh has been saying this since its beginning.

The political leaders of our country in their quest to project their opponents in bad light say anything about them just to dub them in total negation. But they have to face criticism and derision. It seems that Rahul Gandhi too wants to be counted amongst such leaders.

During his foreign tour he repeatedly said that the BJP and RSS were trying to disintegrate the country while Congress integrated the nation. Had he known the history of his own party he would not have made such a statement. In fact the Congress is solely and singularly responsible for driving the wedge between the various sections of Indian society.

Rahul Gandhi not only targeted Prime Minister Narendra Modi and his government and the BJP during his tour of Germany and the UK but he also attacked the RSS. He accused the BJP-RSS of trying to usurp the statutory bodies and weakening them besides dividing the society. To justify his argument, Rahul Gandhi tried to liken the RSS with Muslim Brotherhood and Islamic State – the two terrorist organisations that have been wreaking havoc in the Muslim world.

RSS definitely advocates Hindu Nationalism and projects Hindu culture as alternative to Bharatatiya Culture. But to doubt its patriotism and nationalism is like comparing light with darkness. Rahul Gandhi did commit such a blunder when he compared the RSS with Students Islamic Movement of India (SIMI). Just think when Mahatma Gandhi visited the RSS camp in Wardha during pre-independence days and praised the RSS for their discipline and keeping away the caste affiliations. He then said had the Congress had such disciplined cadre he would have compelled the British to leave India at an early date.

What Rahul Gandhi said was miles away from the truth. The logic he is giving to substantiate his comparison of RSS with Muslim Brotherhood would prove suicidal for the Congress party besides reflecting on his political immaturity. The problems he is pointing to were there when his father, his grandmother and her father Pt Nehru were prime ministers of this country. What Modi government inherited came as a gift of Nehru-Gandhi family rule.

Though it is difficult to change the view of Rahul Gandhi and his Congress Party regarding RSS the ground reality is that all the three major constitutional posts are occupied by the persons with RSS background. The President, Vice President and Prime Minister come from RSS ideology. RSS has been working for the uplift of the country and the society. The slogan of “Sab Ka Saath Sab Ka Vikas” has its origin in the Sangh philosophy and is a gift of the Indian culture.

When RSS talks of Hindu Pride and consolidation that does not mean it is against the Muslims or Christians. On the contrary it is an attempt to search their roots in India. Sangh has been saying since beginning that Muslims and Christians of India are fundamentally Indians and share same ancestors, culture and motherland with the Hindus. It would have been better had Rahul Gandhi studied the history of India first and then made such statements.