Much has been said and discussed in various media channels and social media outlets about the three-day lecture-cum-question-answer series of Sarsanghchalak Dr Mohanrao Bhagwat organized by Delhi unit of Rashtriya Swayamsevak Sangh in Delhi’s prestigious Vigyan Bhavan from September 17-19, 2018. 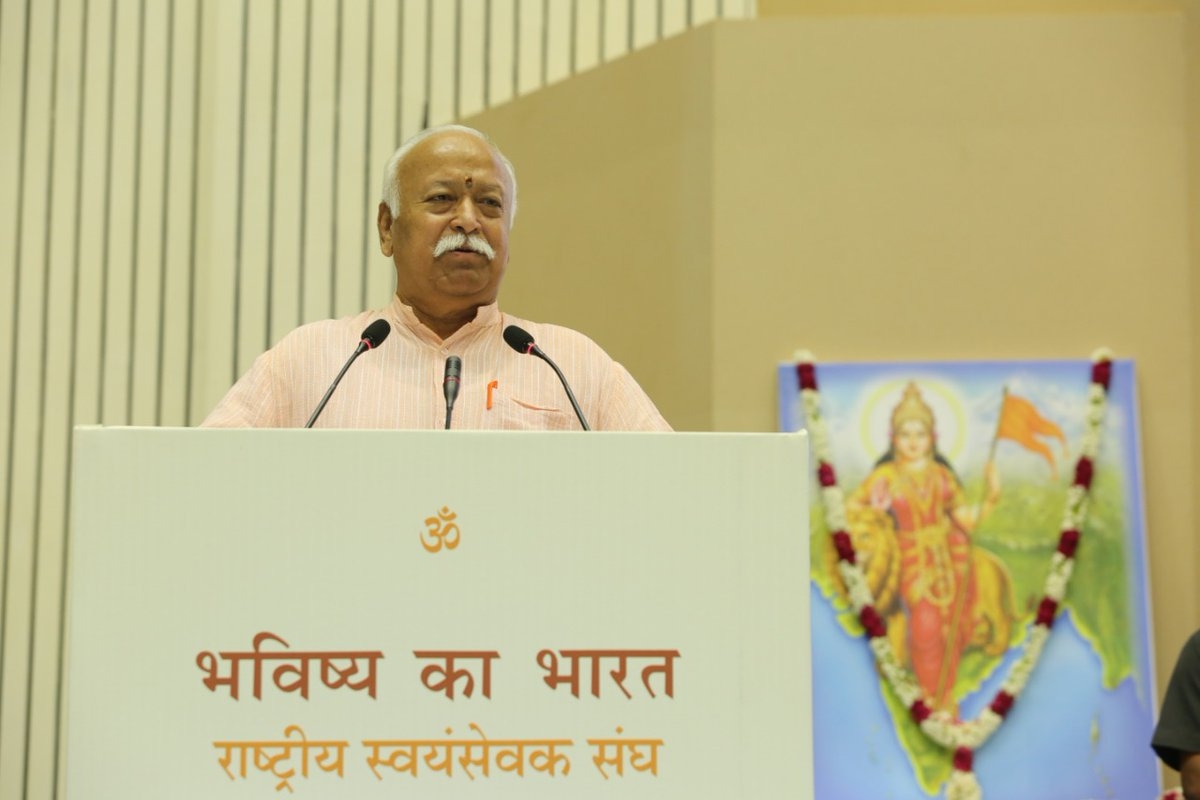 To the so-called mainstream media (MSM) Bhagwat’s revelation of RSS ideology in the changing scenario appeared to be the ‘Glastnost’ moment of RSS while some others raised doubts about the ‘real’ intentions of the Sangh. Some observers questioned the timing of these discourses and some others welcomed the interpretation but expressed reservations about how these will be accepted and digested by the rank and file of the RSS.

However, most, almost all so to say, have viewed, examined, interpreted, and defined this ‘Glastnost’ moment of RSS from the political point of view and that is why there is a strong possibility that all the inferences based on a political assessment of RSS would prove wrong for sure.

This is just because the Rashtriya Swayamsevak Sangh is not a political organization the way its critics and admirers perceive it to be. You cannot equate it with a political party. From the day one, it has steadfastly maintained its cultural and social character refusing to be drawn into any type of political activity related to politics of power. But it has also reserved its authority and prerogative to make comments and express opinions on the issues of national importance. Its founder Dr K B Hedgewar - and the incumbent Sarsanghchalak Dr Bhagwat dealt with his persona at length in course of his opening lecture - had made the organization’s stand on politics clear to Dr Shyama Prasad Mukherjee when the latter met him at Nagpur. He categorically told Dr Mukherjee “RSS does not take part in day-to-day politics”.

Later when the same Dr Mukherjee founded Bharatiya Jan Sangh, the RSS deputed best of its men to help him build the new political party as a viable alternative in Indian democratic polity. Pt Deen Dayal Upadhyaya whose birth anniversary is being celebrated all over the country today, and former Prime Minister Atal Bihari Vajpayee worked with Dr Mukherjee and built the Bharatiya Jan Sangh and later the Bharatiya Janta Party (BJP) which has shot to prominence by capturing power at the Centre and in as many as 19 states literally from a scratch.

Perhaps that is the reason why the media, intellectuals and secular politicians trying to impose political attributes and motives on RSS while evaluating its working. Perhaps, they suffer from a myopic vision that sees only politics in each and every action of the Sangh.

When these critics put forth their views on RSS, they just go on repeating the same old allegations against the Sangh – that it is communal, parochial, anti-Muslim, anti-Christians, obscurantist, regressive, revisionist and revivalist etc. etc. Though in the bottom of their hearts they knew the fallacy of these allegations they are helpless. As the third Sarsanghchalak Balasaheb Devras used to say about these traditional critics of Sangh that they could not ‘pocket’ the Sangh like other parties.

Devras had clarified time and again which Dr Bhagwat reiterated that the RSS never indulged in politics of power (सत्ता की राजनीती). The RSS does not have any interest in election, power, positions etc. The Swayamsevaks are in the politics but that does not mean that RSS interferes or influences their decisions. The RSS has always stayed away from the politics of elections and power. But there are certain issues, topics of national importance, of social and cultural relevance on which the Sangh expresses its considered opinions firmly and with confidence.

Dr Bhagwat had categorically denied the presence of any power centre outside the constitution. He was forthright in saying that the government follows the principles laid down by the Constitution and that no parallel power centre ever existed in the country. “No orders are issued from Nagpur”, Dr Bhagwat clarified in his lecture. The same question was raised during the Janata Party rule post-emergency to Balasaheb Devras who denied the existence of any such power centre and dared the critics to show any instance of indulgence of Nagpur (RSS HQ) in the functioning of the government. By levelling such baseless and fictitious allegations they only lose their credibility, he had said. In repeating the similar allegations again the critics have only proved how right Devras was.

In course of his lectures, Dr Bhagwat has made a reference to multifaceted service activities being conducted all over the countries, especially in the remote and inaccessible areas, by the Sangh Swayamsevaks and the number of such activities have crossed the 1.70 lakh mark. It was in 1989, the Sangh gave emphasis on service or ‘sewa’ activities. That was the birth centenary year of its founder Dr Hedgewar and this new dimension was added to the Sangh work by Balasaheb Devras, who was the close confidante of Dr Hedgewar.

These social activities cover sectors like education, healthcare, vocational training, orphanages, hostels, rural and village development, bio-farming, cow rearing and research, natural calamities and so on. You name the field and they are there. The Sangh swayamsevaks serve the people without any discrimination and reservation. Naturally, these activities have earned a good name and reputation for the Sangh among the masses. They have brought in some positive transformation in their lives also.

But, the evaluation or assessment of Sangh that is done by the media or intellectuals defies this transformation brought in by its countless social service activities. The assessment is purely political and therefore hundred per cent misleading and negative. Passing comments on this political assessment of RSS, Balasaheb Devras would say that they were not at all interested in this. He said and Dr Bhagwat reiterated that the Sangh was started to organize the Hindu society elevating it above the petty differences of province, language, caste, sects etc.

And how does the RSS accomplish this Herculean task? Just to cite an example, the Vishwa Hindu Parishad (VHP) in its Udupi and Prayag sessions passed resolutions denouncing untouchability as a sin and appealing the Hindu society to shun this from their life. “No Hindu is fallen, No Hindu is untouchable, All Hindus are brothers”, it proclaimed in presence of Shankaracharyas, Mahamandaleswaras and other religious leaders. Now, this is a remarkable achievement but hardly any media channel or intellectual worth his salt will give credit to the RSS for this.

And VHP is not the only organization. Today there are 35-40 such organizations active in the fields of education, healthcare, self-employment, village uplift and development and organic farming, cow rearing etc. that form what is called as “RSS Parivar” or RSS Family. Each organization is independent, the Sarsanghchalak proclaimed from Vigyan Bhavan. Each one works independently, have a separate constitution that governs their activities and organizational setup and hardly they take ‘orders’ or ‘instructions’ from RSS. The ‘Samanvay’meetings are held for the swayamsevaks engaged in these organizations to exchange their experiences and views and to get recharged.

Dr Hedgewar compared the RSS with a powerhouse. Electricity is generated in the powerhouse but the same electricity is used to illuminate it when it gets channelized through conducting wire network. Similarly, men of character committed to the nation and dedicated to serving the people are made in the RSS and they fan out to different sectors of the social life as per their choices and serve the people there. They develop these sectors independently on their own. Hence, today we see the BMS, BKS, VHP, ABVP, Vidya Bharati, Vanavasi Kalyan Ashram, Sewa Bharati etc. to name a few, as independent giants in their respective sectors catering to various the needs of the people.

To understand the relationship the Sangh has with these organizations one has to seek refuge in the Bhagwad Gita. There Lord Krishna explains to Arjuna how he is related to the entire universe. He said, All beings are in Me but I am not in them.

(By Me, in My unmanifested form, this entire universe is pervaded. All beings are in Me but I am not in them. And yet, everything that is created does not rest on Me. Behold My mystic opulence! Although I am the maintainer of all living entities and although I am everywhere, I am not a part of this cosmic manifestation, for Myself is the very source of creation).

This is difficult to understand but can be explained by a very crude example of a king. The king is head of the government and the government is the manifestation of his energy. The different government departments are nothing but the energies of the king and each department is resting on the king’s power. But still one cannot expect the king to be present in every department in person.

Same is the relationship of RSS and its Parivar organizations. They unfold the grand vision of RSS, they manifest its energies, yet they are independent. If the critics of RSS understood this complex nature of the relationship they will have clarity in their views about the RSS. But for this, they have to follow the advice of the Sarsanghchalak who in course of his lectures appealed to them to come and see the Sangh for themselves in order to understand the organization. If they do, then it could be their ‘Glastnost’ moment.