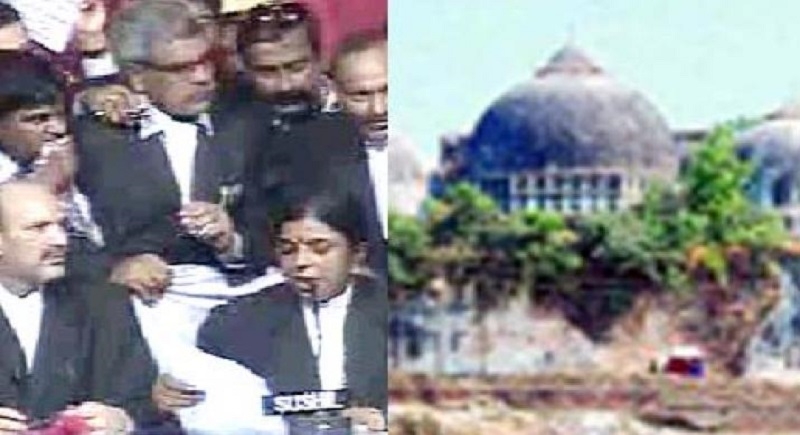 By the quote “Justice Delayed; Justice Denied”, the responsibility for the judicial faux pas or impasse over Ram Mandir crisis resolution squarely falls at the door steps of the Supreme Court (SC).

None can deny that the judiciary continues to be held in highest esteem for its credentials for upholding the Constitution and rule of law. Despite the spurt of ‘judicial activism’, one cannot but help but pointing out its share of blame for the current impasse in resolving the Ram Mandir crisis.

Ipso facto, the SC has heard the Ram Mandir case well over ten times - what with the recent one in January 2019. As per the latest directions, the matter stands referred to a 5-Judge constitution bench not only to adjudicate on an ordinary title dispute but also on other substantial issues.

In sum, the shifting blame game by all responsible institutions of the State is quite ironic and likely to be tragic for the society and the nation.

The detailed timeline of the Ram Janmabhoomi-Babri Masjid land dispute is available in public domain. Let me highlight that the case was first filed in Faizabad District Court in 1885 by Mahant Raghubir Das seeking permission to build a canopy outside the disputed structure.

Thus, the case is pending in courts for over 133 years. Call it by whatever phraseology one may like to invoke - political, judiciary, media or civic society - “Ram Mandir Logjam” is a grim reality that portends dangerous ramifications in posterity. Also, the Ram Mandir crisis cannot be viewed myopically as post-independence RSS-BJP inspired political problem.

Let me highlight in broad outline the key milestones of judicial delays at various levels after India attained independence in 1947 as irrefutable proof of phenomenal or abnormal judicial procrastination breeding and fueling the current crisis that may result in eruption of communal violence in future.

Ipso facto, the civil suit case is as old as 26 years in the SC, and in the High Court (HC) even earlier. Surely, the judiciary needs to acknowledge its role in allowing the communal time bomb ticking.

First, on 23 December 1949, both the Hindu and Muslim sides filed civil suits in the District Court when Lord Ram’s idols were placed inside the Central Dome. Then followed the government proclamation of the site as “disputed area” and locking the gates. So, it is as old as 69-years in modern India.

Third, on 17 December 1959, the Nirmohi Akhara filed a suit seeking possession of the site and claims to be the custodians of the disputed land followed on 18th December 1961 by the Sunni Central Waqf Board filing a suit claiming ownership of the site.

Fourth, in 1986 Rajiv Gandhi ordered opening of gates and allowed religious rites to take place in the disputed site as part of the Congress Party “Appeasement Politics” strategy. On 1 February 1986, the district court ordered the gates of the mosque opened and Hindus be allowed to worship there. Muslims protested the move and formed Babri Mosque Action Committee. The Court scene shifted to the HC. On 14 August, 1989, the Allahabad HC bunched together the four petitions regarding the dispute over Babri Masjid and ordered that status quo be maintained.

Fifth, on 9 November 1989, following permission from the Rajiv Gandhi government as a pre-poll carrot, VHP laid the foundation of a Ram temple on land next to the Babri Masjid.

Sixth, following the demolition of Babri Masjid in 1992, the Central government acquired lands in the disputed area. Writ petitions, including one by Ismail Farooqi, filed at Allahabad HC challenging various aspects of the Act. Subsequently, the SC in October 1994 passed its judgment in the historic Ismail Farooqi case that the mosque was not integral to Islam.

Add to it, some more highlights of judicial references. One, in April 2002, the 3-judge Bench of Allahabad HC ordered the Archaeological Survey of India (ASI) to excavate the site to determine if it was a temple earlier. And, the ASI in August 2003 found features of 10th Century temple and submitted its report to the Allahabad HC.

Two, the SC re-entered the scene in March 2003 and gave a verdict in the Aslam alias Bhure case that “no religious activity of any nature be allowed at the acquired land.” The SC interim order should be operative till disposal of the civil suits in Allahabad HC to maintain communal harmony.

Three, after a delay of over 7-years, July 2010, the Allahabad HC on 30th September 2010 ordered that the 2.77 acre disputed site be divided into three parts among the Hindus, the Muslims and the Nirmohi Akhara. But, All India Muslim Personal Law Board challenged the ASI report. The HC reserved its judgment and advised all parties to solve the issue amicably in July 26, 2010. On 23 September, the plea for an out-of-court settlement reached SC who adjourned it to hear again on 28 September. Subsequently, the HC announced to pronounce the verdict on 24 September, but deferred the judgment on a writ petition. However, the SC rejected petition for deferment and gave the nod to the Allahabad HC to deliver the judgment.

Four, on 9 May 2011, the SC stayed the verdict of the HC on petitions filed by Mahant Suresh Das, the Sunni Central Board of Wakfs, Nirmohi Akhara, the Akhil Bharat Hindu Mahasabha, Jamait Ulama-I-Hind and others challenging the verdict. A petition was also filed on behalf of Ram Lalla challenging the HC verdict.

On 26 February, 2016, Subramanian Swamy filed plea in SC that sought construction of Ram Temple to begin at the disputed site. However, on 21 March, 2017, the SC stated that the matter is sensitive and suggested it to be settled out of court to find an amicable solution.

After hearing the civil appeals commencing on 8 February 2018, the SC on 14 March, 2018 rejected all interim pleas, including Dr Swamy’s seeking to intervene as parties in the case. It was followed on 16 April 2018 by Rajeev Dhavan plea in SC to refer the issue of reconsideration of the observations in its 1994 judgment to a larger bench. And, the SC reserved the verdict.

On 27 September 2018, the SC declined to refer the case to a 5-judge Constitution bench and the case to be heard by a newly constituted 3-judge bench on 29 October 2018 and clarified that it would have no bearing on pending title suits.

In October 2018, the SC decided that the land dispute case will only be listed before an “appropriate Bench” in January 2019 by the Bench consisting Chief Justice Gogoi and Justices S K Kaul and K M Joseph and stated “the appropriate Bench will fix the schedule with regard to the hearing of appeals in the case”.

In sum, the judicial delays through adjournments and flip-flops are squarely responsible for the Ram Mandir crisis “Pot” boiling or the “Bomb” ticking away. Quite prophetic is the reflection of K N Panikar, Professor of Modern History, JNU, who stated after the Babri Masjid demolitions: “While the partition was culmination of the communal movement, Ayodhya is not necessarily the end. It might well be the beginning of a major political catastrophe”.

Yet another significant Ram Mandir issue is its politicization. The Congress Party is squarely responsible ab initio for stoking the political crisis due to its “Appeasement Politics” strategy. Jumped into the fray by the VHP and followed the then BJP President L K Advani’s Rath Yatra from Somnath to Ayodhya on 25 September 1990 and got arrested in Bihar’s Samastipur in November. Later, VHP volunteers partially damaged the mosque and Prime Minister Chandra Shekhar tried to resolve the dispute through negotiations. Non resolution of the crisis for well over 30-years is responsible for the cumulative buildup and hijacking of the movement by the VHP and the BJP.

Not to be sidelined are the past authentic records of communal conflicts available in public domain. The first recorded bloody conflict occurred during the years 1853-55. In the first conflict, a rebel Priest who turned Maulvi, attempted to capture the Shrine. He was killed by the combined forces of Nawab Wajid Ali Shah of Avadh and the British led by the First Irregular Infantry. The death toll was estimated between 120-700. Subsequently in 1855, the Muslims captured the shrine. But by a fierce counter attack, the Hindu Bairagis recaptured it and killed 75 Muslims.

In 2002, BJP ruled out committing itself to the construction of a temple in its election manifesto for Uttar Pradesh assembly elections. VHP confirmed deadline of 15 March to begin construction. Hundreds of volunteers converged on site. At least 58 people were killed in an attack on a train in Godhra which was carrying Hindu activists returning from Ayodhya. Followed the communal violence in Gujarat in March 2002 where hundreds of people died were killed. In July 2005, suspected militants attack the makeshift Ram temple at the site, using a jeep laden with explosives. The CRPF shoots dead all five militants in a gunfight while one civilian died in the grenade attack that the terrorists launched in order to breach the cordoned wall.

Add to it, the issue of charges of criminal conspiracy against Advani, Murali Manohar Joshi, Uma Bharati and Vinaya Katiyar in the demolition case. Next, in September 2003 a court ruled that seven Hindu leaders should stand trial for inciting the destruction of the Babri Mosque. No charges are brought against Advani. However, in November 2004, a court in Uttar Pradesh ruled that L K Advani's role in the demolition of the Babri Masjib be reviewed. As late as March 2017, the SC has not dropped the case against them.

Even the out-of-court settlement initiatives need to be recounted. Vajpayee had set up an Ayodhya cell in his office and appointed Shatrughan Sinha to hold talks with Hindu and Muslim leaders. Even the recent Sri Sri Ravi Shankar initiatives have failed to provide a breakthrough who remarked prophetically “India will turn into Syria over Ram Temple.”

Next in the firing line are the main right wing political parties – BJP, Shiv Sena etc. Rarely ever they criticize the Congress Party for its diabolical role in lighting the communal fuse many decades earlier. Add to them, the part played by Sunni and Shia Muslim political parties.

Of course, media, which is the sinister manipulator behind the scenes shaping people’s perceptions as the problem, never receives its share of blame. Even the partisan media is also part of the problem complexity. Some of them are culpable of not sharing ‘facts’ of the dispute accurately to people. To compound the issue, media speculation over “Issue of Ordinance” or “Tabling of Law” in the Lok Sabha as a political imperative or compulsion of Modi-led BJP/NDA.

Now, that Modi made it clear that an ordinance to build a Ram Mandir would come only after the Supreme Court, which is hearing the matter, delivers its verdict. After all, Modi stated that “The ordinance on triple talaq was brought after the verdict of Supreme Court. We want the issue to be solved within the framework of Constitution. The ordinance on Ram Mandir can arise only after legal process gets over and SC gives its verdict.” Moreover, Modi criticized the Congress Party for indulging in dual postures to make political gains: batted for the rule of law; but at the same time allowing Kapil Sibbal to fight cases to delay the SC verdict until after the elections.

Viewed in the above background, who is responsible for the ongoing Ram Mandir crisis faux pas or impasse? Quite often, media and intellectuals blame communal diehards on both sides of the fence. They single out and villainess few. In the forefront are the RSS, VHP and Bajrang Dal and other Hindu organizations. Media dare not show the Muslim diehards in poor light.

Why is the SC dilly dallying or hesitant to adjudicate in a fair and just manner. Is the SC culpable of indulging in “passing the buck” game to political leadership only to be followed by passing strictures and finding faults against any political decision? High time for the SC to decisively deliver its verdict favoring one way or other and allow the political parties to face its consequences.