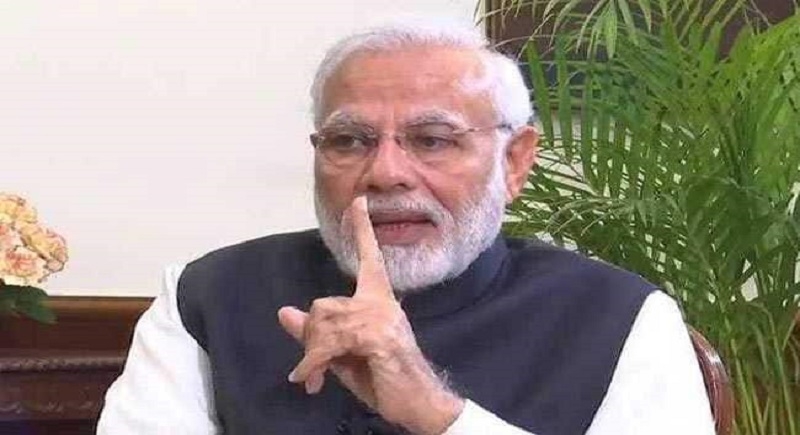 “The objective of war is not to die for your country but to make the other bastard die for his” – US General George Smith Patton Jr.

Prime Minister Narendra Modi’s interview to ANI Editor Smita Prakash reminded me this famous quote of US war veteran General George Smith Patton after whom the formidable Patton Tanks were named. Yes, those were the same Patton tanks destroyed by our brave soldiers blasting the myth of their superiority, strength and military prowess in 1965 Indo-Pak war.

Prime Minister Modi seems to have followed the principle “never let the enemy pick the battle site” when he talks about the ensuing general elections vis-à-vis Opposition unity efforts. His carefully delivered answers to probing and demanding questions from the ANI editor underlined the fact that Narendra Modi is in position to change the narrative to his own terms and in his own time and will never allow the opposition to be in control of affairs.

Master strategist as he is, Prime Minister Narendra Modi has always refused to play to the tunes of his adversaries ever since he became the Chief Minister of Gujarat. He would never fall prey to his opponents’ game plans and this was once again established most vividly in his recent interview to ANI.

The Congress party, the most vocal opponent of Narendra Modi in person, had launched the most malicious propaganda against him and his trusted lieutenant Amit Shah. They used the Gujarat 2002 riots, encounters of Sohrabuddin and Prajapati to spread the net to catch both of them. Even Sonia Gandhi called him “Maut ka Saudagar” to her son the Congress President Rahul Gandhi’s “Chowkidar Chor hain” barb, every expletive, Manishankar Ayer’s “neech” included, is used to demonise Modi and Shah. Both of them responded to these barbs as and when necessary in the past without letting their opponents succeed in their malicious designs.

Prime Minister Modi in his New Year Interview to ANI has accepted the challenge of the opposition and exuded the confidence of his party’s electoral victory in the ensuing General Elections. One who accepts the challenge can feel the exhilaration of victory and this was visible from the words and body language of the PM during the 95-minute interview.

Besides setting the tone and agenda of the 2019 General Elections, Prime Minister made it amply clear that he will lead the party to victory in the elections scheduled to be held in a few months from now.

The interview covered a wide range of topics from Rafael fighter deal and AugustaWestland Helicopters to Ram Mandir to demonetization and GST to farmers’ plight to defeat of the BJP in the recently held Assembly elections in its stronghold. These were the issues highly used mostly by the Congress President Rahul Gandhi to build up a false, fabricated narrative and hurl abuses and expletives at Prime Minister Narendra Modi and his government.

The Prime Minister succeeded in forcefully and decisively changing the narrative by stating that election outcome is not only standard. But in the same breath he forecast that the 2019 electoral battle would be “Janata vs Mahagathbandhan” i.e. people of the country against the ‘mahagathbandhan’ of opposition parties. He quickly established the connect with the common masses when he made references to electrifying 18000 villages or success of ‘Ujjwala Yojana’ to provide cooking gas connections to lakhs of poor households in the last four and half years of his government. The Prime Minister by making such an observation has underlined that he belonged to “Janata” and he is inseparable from them and the ‘Mahagathbandhan’ is anti-people.

Of all the issues discussed during the interview that of Ram Mandir was highlighted most by the so called mainstream media (MSM). They highlighted how the Prime Minister spoked the temple protagonists by ruling out any ordinance before the judicial procedure is completed. The Supreme Court is to decide on hearing of the appeals pending with it on this matter and it has fixed January 4 to take further decision. The supporters of Ram mandir were hopefully confident that the temple could be constructed at Ayodhya – the birthplace of Lord Ram – during the tenure of this government only and they were not altogether wrong. For have not they elected the majority government of the BJP to facilitate the construction of the temple regarded as symbol of national pride?

The Prime Minister clearly said that after the judicial process is over, whatever be the responsibility of the government, we are ready to make all efforts. Though he did not commit on ordinance for the temple, he indirectly hinted to it if the decision of the court goes against the temple. This should suffice to rest at peace the protagonists of Ram Mandir, at least for the time being. They should not have any doubt in their minds that if at all any government could fulfil their mission of Ram Mandir it is the Modi government. There should not be any doubt over it.

The Prime Minister also touched to another sensitive and burning issue of relations with Pakistan. He said that one war is not enough for Pakistan to mend its ways. True. Ever since its birth in 1947, Pakistan has faced defeat after defeat in all the wars it fought against India. In the 1971 war a major chunk of its geographical area got separated as an independent nation called Bangladesh with the help of India. Still it has not improved its ways or at least has given any indication of change for the better. India has tried its best, sometimes going out of the way, to let Pakistan improve its nature but in vain. This is because ‘hate-India’ is the only mainstay of existence for Pakistan. The moment it develops ‘good neighborly’ relations with India, the purpose of its existence gets killed.

The Prime Minister referred to terrorist attacks from the Pakistan border and defended the Surgical Strike against such terrorists. Even after one surgical strike Pakistan has failed to mend ways. It is in that context Modi said that one war is not enough to take to correct path and prove itself to be a good neighbor.

The interview also endorsed the perception that the Prime Minister has managed to strike a chord with the people directly bypassing the media perception about him and his style.

Explaining his concept of “Congress-mukt Bharat” Prime Minister Modi once again reiterated that by floating that term in the public domain what he meant was to rid the country of Congress culture and way of thinking that has ushered in an era of nepotism, corruption, and casteism and not wipe out the Congress party as such. In fact, he lamented the absence of an effective opposition party in the country.

Congress, particularly Rahul Gandhi, has used all the weapons at their disposal against Modi. 2019 has just begun and elections are still a few month away. They are given complete chance to voice their views, hurl barbs at the PM and build the narrative suitable to their intentions in the public domain. Elections are actually to be held after four-five months. What will they have when the actual electioneering begins because they have used every single issue from accusing the PM of corruption, trashing every scheme launched by him and hurled personal expletives at the PM. They used the caste card, the Muslim card, the violence card, the intolerance card, the Hindu card, and so on in the beginning itself. One wonders what will they have to build their electioneering during the Lok Sabha polls?

The Prime Minister will allow the Congress and other Opposition parties and their ‘Mahagathbandhan’ to wander in the wonderland of false narratives while he and his party will go to the ‘Janata’ with all the welfare schemes and good work done in the last five years. When the Lion roars, the jackals flee for life, and this is what is to happen to the ‘Mahagathbandhan’ in the coming polls.

For, once again Prime Minister Narendra Modi has underlined that he will set the narrative and agenda and compell his opponents to follow that narrative, for Modi and Shah will not play to the games by the rules set by their distractors. They have proved in the past and they will prove it once again. So, wait till 2019.