Merignac, October 8: India’s air power is all set to take wings as Rafale move in! Thrusting force and empowering the defence structure, Raksha Mantri Rajnath Singh on Tuesday landed at Merignac Airport in the southwestern French town of Bordeaux for the handover ceremony of the first Rafale combat jet acquired by the Indian Air Force (IAF). A perfect day to welcome the perfect weapon, India celebrates the Indian Air Force’s 87th anniversary along with Dussehra, a perfect time to bring in the reclining defence beauty. 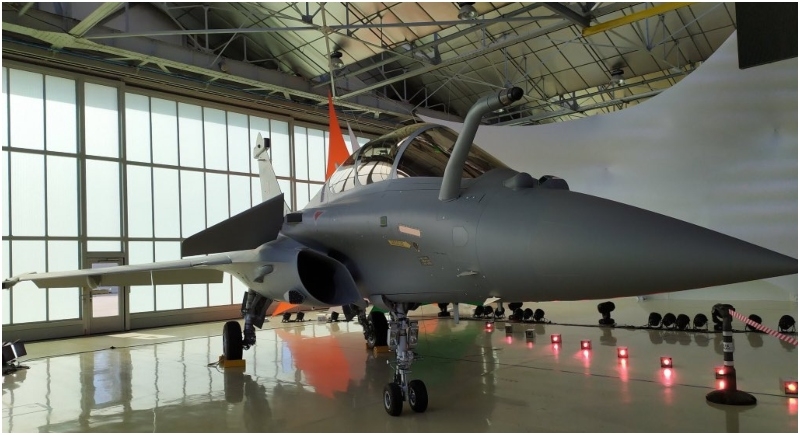 Raksha Mantri Rajnath Singh, in Bordeaux, took a tour of Rafale manufacturer Dassault Aviation's plant before a symbolic ribbon-cutting ceremony for the first Rafale combat jet. Earlier, the minister, held wide-ranging talks with French President Emmanuel Macron in Paris, said his visit was aimed at "expanding the strategic partnership" between India and France.

Wishing everyone on Indian Air Force day, Rajnath Singh tweeted saying, “Greetings to all IAF personnel and their families on the 87th IAF Day.” Singh added, “The IAF is the shining example of exemplary courage, fortitude, determination and impeccable service to our nation. These men and women in Blue have the ability to touch the sky with grit and glory.”

After the handover ceremony, the minister is scheduled to fly a sortie in the Rafale jet following a brief Shastra Puja conducted by him, which will conclude with the traditional breaking of a coconut before the new aircraft.

India had ordered 36 Rafale fighter jets from France in a deal worth Rs 59,000 crore in September 2016. While the formal handover ceremony takes place this week, the first batch of four Rafale jets will fly to their home base in India by May 2020. All 36 jets are expected to arrive in India by September 2022, for which the IAF has been reportedly undertaking preparations, including readying required infrastructure and training of pilots.

The Rafale is a twin-jet fighter aircraft able to operate from both an aircraft carrier and a shore base. The manufacturers describe it as a fully versatile aircraft which can carry out all combat aviation missions to achieve air superiority and air defence, close air support, in-depth strikes, reconnaissance, anti-ship strikes and nuclear deterrence.

The Rafale jets intended for India are expected to come with certain bespoke modifications for the IAF and have been awaited as a crucial enhancement to India's Medium Multi-role Combat Aircraft fleet. The first Rafale jet will come with tail number RB 001, with RB denoting the initials of Air Chief Marshal Rakesh Bhadauria who played a key role in striking the deal for the jets in his previous role as IAF deputy chief.