Leh, October 9: Living up to the expectations of the people and fulfilling its promises, Leh got its first government-sponsored and operated Day Care-cum-Recreation Centre for senior citizens. It will be one-stop-shop for entertainment, medical services and legal aid for the aged people of the region. The Centre will provide various medical facilities as well as legal service to the senior citizens. 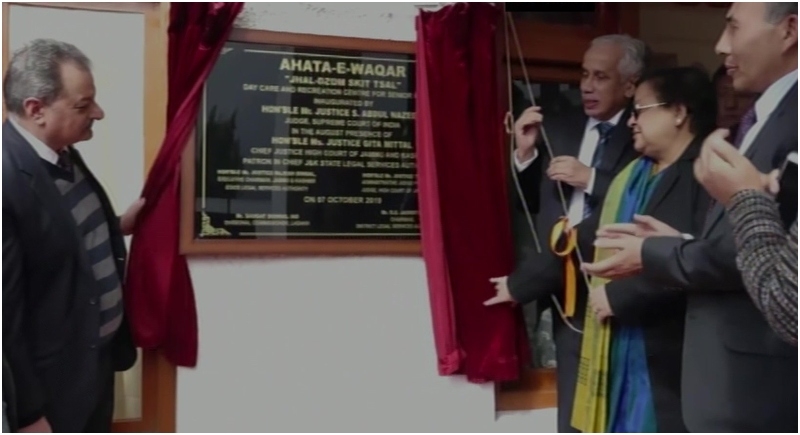 The centre was inaugurated by Supreme Court Judge, Justice S Abdul Nazeer, in presence of Chief Justice Jammu and Kashmir, Gita Mittal, on Tuesday. The Centre, co-sponsored by Government and the District Legal Service Authority will also provide a raft of medical facilities including geriatric care, health consultations and check-ups, physiotherapy as well legal service the senior citizens would require on various legal issues. The premises will also be equipped with computer learning and a library. The aged citizens can entertain themselves with indoor games and recreational activities.

Congratulating the people, Justice Nazeer appreciated the initiatives of the State Legal Service Authority who came up with this concept for the senior citizens. She said that she felt immense pleasure over visiting Ladakh and dedicating this facility to the senior citizens of this region. Adding she said that opening a centre is comparatively easier than its sustainability; therefore, the local administration has a big responsibility to run this recreation centre in a meaningful way.

Greeting the senior citizens of Leh on the inaugural day of their Day Care and Recreation Centre, Justice Mittal made a mention of the success story of "Swabhiman Parisar" - a Centre for welfare of senior citizens of Delhi which was opened on her initiative and said that similar centre was also opened in Srinagar and now in Leh with all those facilities.

She further said that in this fast-changing scenario, such centres are required especially for the elderly people to get answers to all their questions from a single window. Justice Mittal expressed gratitude to the district administration for their huge contribution in establishing and running the Centre. Welcoming the guests and senior citizens on this occasion, Deputy Commissioner, Leh Sachin Kumar Vaishya said that the centre would play a role of game-changer in addressing the special needs of senior citizens at their crucial point of life and would provide perfectly a socializing environment for them. He assured that district administration would do its best to run the Centre in a well-organized way.