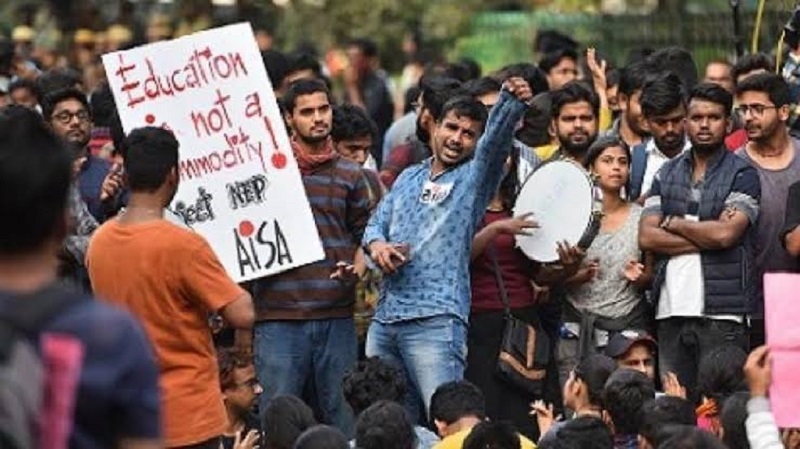 Mass protests with students virtually spearheading them in large numbers are happening in a growing number of countries for different reasons and with various goals. Their prospects on review of the past growth processes in India are quite frightening.

First, let me start by addressing the basic issue – purpose of education. Among the many views of great academics and experts, three of them are recounted to form the basis for reviewing the true of education today in India:

· “To teach us values, develop stimulated intellect, understand tolerance for disagreeable belief systems, dig out opportunities to question what exists, and contribute to the growth of the human society.”

· “To make a human with social responsibility. The real purpose of education is to make every human to be a better persons with love for oneself, others and for the nation. Education in the modern days should aim at building a new society of love, justice, equality and peace. It is the lamp which should kindle the fire in preparation for the adventures of life and to face any kind of situation with confidence.”

· “To create responsible, creative, critically question citizens, thinkers to build a socially/ecologically just community, build a labor force and inspiring support for the growth of the knowledge “Whole” Student.

So, none can lay blame for student protests for the sake of academic issues to include curriculum, sports and cultural activities within the campus. Certainly, student activism over such issues is very important in university culture, besides giving an opportunity to deliberate and discuss politics, culture and social challenges in a stimulating, free environment. However, misusing this autonomy must not stall smooth academic functioning and damage image of educational institution.

In retrospect, whatever is happening today in university campuses of the “Central Universities” and also “State Universities” is a mere and sheer politics of the most vicious order aided and abetted by external political elements.

What is the root cause for spiralling or proliferating protests, particularly student protests contra real purposes of education?

In reality, the root cause can be traced and linked to excessive politicization of academic institutions all over the world. For example, in India, there are over 30 mainstream students organizations linked with political parties – NSUI (Congress), AIRSF (CPM), AISF (CPI), ABVP (RSS), Muslim Students Organization, Muslim Students Federation, etc. . Students of each religious community and tribal groups have their respective organizations and federations acting as umbrella groups. If we add all such local organizations, their numbers may exceed more than a thousand.

In reality, some students exploit leadership platforms in the campuses as stepping stones or easy paths to advance their political careers – power, status and wealth - with least academic effort. And, their political masters guide and tutor them in all vices – treachery, intrigue, coercion, intimidation, extortion, rowdyism, goondaism, boycotts, rallies and protests. After all watching political leaders vicious and violent performances in the Parliament and the State Assemblies, what can one expect students, as followers, to learn from their decrepit leaders?

Of course, student protests are a universal phenomenon. India is no exception. In the name of academic freedom protecting free speech, students in India are indulging in vituperative hate speech - caste, communal, class and racist – which are highly divisive on factional lines. Ironic academic freedom is confused with free speech sans responsibility and accountability to their violent fallout.

Today student protests cover a wide range of issues – political, social, economic and environmental; but hardly ever for improving the quality of education and research. Futile it is to trace and link them to a common thread for student’s outrage on the streets.

For example, Harvard students and alumni stormed the football field to protest climate change. So also, students in Honk Kong are in forefront of pro-democracy protests in China. Students have also joined protests in Iraq against corruption, unemployment and inefficient public services. Earlier this month a student made a suicide attempt in France suffering 90% burns when he set fire on the campus due to financial uncertainties and insecurity. Furthermore, students are also actively protesting on almost monthly basis in Iran.

And, globalization and the power of social media enable students to instantaneously mobilize crowds to agitate on the campuses since they are free from the wrath of law and order machinery.

Following round the clock success stories of student protests elsewhere viewed in the TV Channels, students in India too are taking a cue from them and launching protests on a variety of issues. After all, corruption, unemployment, inefficient public services, nepotism, cronyism and so on are more profound in India than elsewhere. 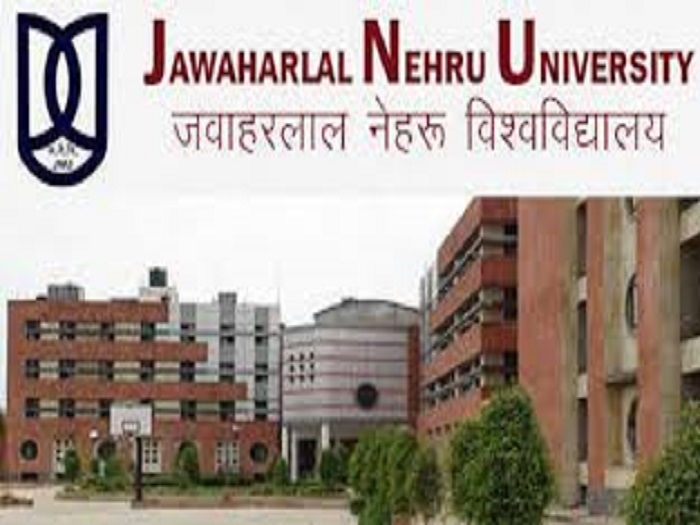 Viewed in the above theoretical and idealistic context, let me broadly review the status of student protests in the Jawaharlal Nehru University (JNU). Ipso facto, the JNU was set up as a model institution with an atmosphere of free thinking, supposedly a premier teaching and research centre ranked number one by the National Assessment and Accreditation Council.

What is the record of the JNU? Only one Nobel Prize winner – Abhijeet Banerjee - and that too in “economics” over the past five decades. None in any other discipline! So, the Ranking 1 in the Country is quite absurd. Most apt, the Ranking 1 should be given for the most vicious student protests and demonstrations in the country.

How can educational institutions embroiled in protests ever achieve unique and extraordinary academic excellence in STEM fields?

The JNU with the latest protests over “Fee Hike” has been making media headlines for all the wrong reasons followed by the Jadhavpur University – both leftist dominated academics and students. Two year ago, the Central University in Hyderabad was in limelight over Rohit Vemula’s suicide.

Today, the JNU student activists justify their unruly behavior stating that the politics is issue-based and intellectual. The only way one can justify it is that they are simply following the footsteps of their political leaders enjoying pays, perks and privileges and the colonial inherited extravaganza on grand display at “tax-payers” costs. Since the “Right to Education” is guaranteed, the State must bear the burden of free education, hostel and mess facilities.

Let me recount the major JNU student protests include: two army officers beaten up for disturbing Indo-Pak mushaira in April 2000; protests in 2010 “to oppose Operation Green Hunt launched by the Government and to celebrate the killing of 76 CRPF personnel in Chhattisgarh and shouting slogans like 'India murdabad, Maovad zindabad'; protests against “Safronization of Education” in 2015; protests against vandalization of “Rainbow Tree” that stood for LGBTQ pride; and protests in 2016 against the execution of Afzal Guru and separatist Maqbool Bhat and raising of “Anti-India” slogans like "Pakistan Zindabad", "Kashmir ki Azadi tak Jung chalegi, Bharat ki barbadi tak Jung chalegi" ("War will continue till Kashmir's freedom, war will continue till India's demolition") resulting in the arrest of the JNU Students' Union President Kanhaiya Kumar and Umar Khalid on charges of sedition and criminal conspiracy, under section 124 of the Indian Penal Code dating back to 1860 snowballing into a major political controversy with Rahul Ghandy and the left parties leaders visiting the campus in solidarity.

Most important is the role of the “Academic” fraternity in the campuses - left or right wing ideologues. Instead of teaching and promoting academic excellence besides inculcating unity, ethics, morals, values and discipline among the student community, some among them play a pivotal role from behind to sow the seeds of divisiveness based on their left or right wing ideological orientation.

Surely, Academics, in the name of free speech and academic freedom, should not be engaged in stirring emotions and sentiments of impressionable minds to launch protests to advance their interests with utter disregard to their ultimate fallout. And, the gullible student leaders join their bandwagon for it is easy path to power, wealth and status in political arena.

The left-supported student organizations have been mostly instrumental in whipping up the present controversy. Marching to parliament on the first day of the session without any prior permission was a political gimmick to portray large scale student unrest. And, it is to remain relevant in India’s emerging political scenario having been rejected at the polls over the past seven decades.

Be that as it may, protests also turned almost violent what with “Associate Deans not allowed to interact with the elected hostel representatives over the hostel manual and one associate female dean held hostage for 36 hours in a classroom, harassed and heckled by students who demanded that she roll back the hike or resign.” Also, a dean was not allowed to leave his premises, even with his deteriorating health. Sadly, the teacher's association of the university has not spoken of these incidents. The slogans on the walls reflect clearly the mind-set that is running a vicious campaign to malign the university under the garb of fee hike protests. A statue of Swami Vivekananda was not only defiled by the agitating students but derogatory language was written all around it.

Viewed in the above glaring differences, the issue that needs to be addressed is “Are the protests for a cause or a conspiracy to promote vested interests of student leaders under the guidance of political parties? The agitation was called in the name of the fee hike; and students accused the administration of taking a big step without consulting the students' union.”

Even affordability at what levels is a key issue? Affordability of education for children aged between 6-14 years is enshrined by the under the RTE Act 2009 for all without any discrimination under Article 21 (A) of the Constitution of India. But what about affordability of pre-schooling education which is mandatory for admissions in Kendriya Vidyalas?

Ipso facto, there are rich, high-middle-low middle class and poor students in all castes and religions. And, their categorization remains on the political backburner due to backlash. Poor among them can ill afford collegiate education at all levels in institutions of excellence.

Most important, the number of countries experiencing mass protest is growing what with the young jobless and rapidly growing uncertainty staring at them. It doesn't always take much to start a riot. A mob of 10 to 100 are good enough to undertake a “Fast unto Death”, Rasta and Rail Rokos besides going on a rampage and vandalizing government and public properties.

Let me highlight my personal experiences. Hostels are the breeding grounds of student confabulations of all sorts. Day scholars hardly have time and inclination to participate in such activities. That brings me to raise the issue “outsourcing and privatizing hostels’ thereby delink them from the University Administration.

Protests and demonstrations today cover a wide range of issues: legitimate grievances against harsh authority, savage wealth inequality, theft of public funds, caste, communal and racial discrimination. And, the authorities have sent police and, in some countries, the army to control the demonstrators. Arrests, injuries and killing of protesters further foment crisis escalation. Making concessions as a means to mollify the demonstrators need not always succeed.

In sum, today democracy has been hijacked by self-serving morally bankrupt sectarian kleptocracy. The prospects of spiralling protests with students in the forefront are a daunting prospect.

The strategy adopted by Modi ji (least corrupt leader) to divert the attention of protestor’s criticisms by the time tested ploy of kneejerk reactive-defensive appeasements and other distractions may buy time, but not contain the vicious spread and spiralling of protests.

Lest student protests snowball on nation-wide scale in the near future, high time for Modi ji to carry out a de novo holistic review of all the issues tormenting the “educational campuses at all levels” and refine policies and allocate appropriate budgetary allocations to meet their growing aspirations and needs.