Washington, November 8: NASA scientists opened an untouched rock and soil sample from the Moon returned to Earth on Apollo 17, marking the first time in more than 40 years a pristine sample of rock and regolith from the Apollo era has been opened. It sets the stage for scientists to practice techniques to study future samples collected on Artemis missions. 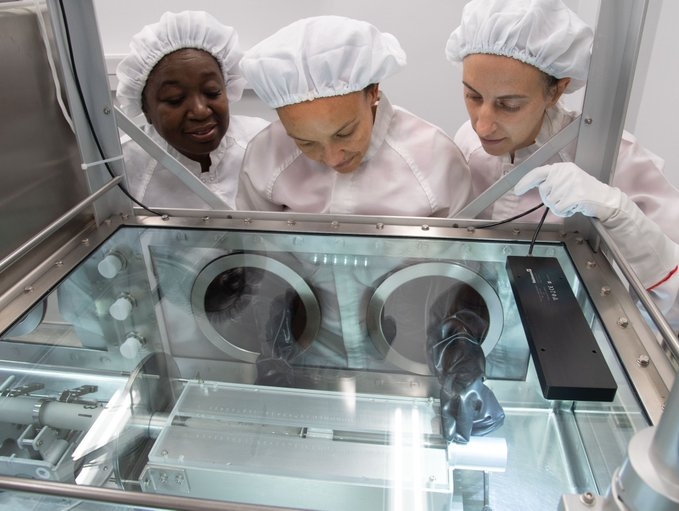 The sample, opened on Tuesday in the Lunar Curation Laboratory at the agency’s Johnson Space Center in Houston, was collected on the Moon by Apollo 17 astronauts Gene Cernan and Jack Schmitt, who drove a 4-centimeter-wide tube into the surface of the Moon to collect it and another sample scheduled to be opened in January. The sample was opened as part of NASA’s Apollo Next-Generation Sample Analysis (ANGSA) initiative, which is leveraging advanced technologies to study Apollo samples using new tools that were not available when the samples were originally returned to Earth.

“We are able to make measurements today that were just not possible during the years of the Apollo program,” said Dr. Sarah Noble, ANGSA program scientist at NASA Headquarters in Washington. “The analysis of these samples will maximize the science return from Apollo, as well as enable a new generation of scientists and curators to refine their techniques and help prepare future explorers for lunar missions anticipated in the 2020s and beyond.”

Apollo sample processors Andrea Mosie, Charis Krysher and Juliane Gross open lunar sample 73002 at NASA's Johnson Space Center in Houston. The Moon rocks inside this tube have remained untouched since they were collected on the surface and brought to Earth by Apollo astronauts nearly 50 years ago.

Since the Apollo era, all samples that were returned to Earth have been carefully stored in the laboratory to preserve them for future generations. Most samples have been well studied, and many are the subject of ongoing research. However, NASA also made the decision to keep some samples completely untouched as an investment in the future, allowing them to be analyzed with more advanced technologies as they are developed. These include samples that remained sealed in their original containers, as well as some stored under special conditions, all intended to be opened and analyzed with more advanced analytical technologies than were available during Apollo.

The unopened Apollo samples were collected on Apollo 15, 16 and 17 missions. Two of those samples, 73002 and 73001, both collected on Apollo 17, will be studied as part of ANGSA. Advances in techniques such as non-destructive 3D imaging, mass spectrometry and ultra-high resolution microtomy will allow for a coordinated study of these samples at an unprecedented scale.

Samples 73002 and 73001 are part of a two-foot long “drive tube” of regolith (rock and soil) that collected from a landslide deposit near Lara Crater at the Apollo 17 site. The samples preserve the vertical layering within the lunar soil, information about landslides on airless bodies like the Moon, and a record of the volatiles trapped within lunar regolith, perhaps even those escaping from the Moon along the Lee-Lincoln Scarp, a fault at the Apollo 17 site.