Why the common peace-loving Citizen of India have no issues about CAA; Read this

It is now clear that an intelligence report shared with the Ministry of Home Affairs, banned radical Islamist outfits like Students Islamic Movement of India (SIMI) and PFI (Popular Front of India) are behind the violent protests in several places across the country with the provocation from some ‘political parties. Reports published in some trustworthy Media are citing the intelligence report  submitted last week, says that the violence and unrest is the ‘handiwork’ of banned Islamist outfits. 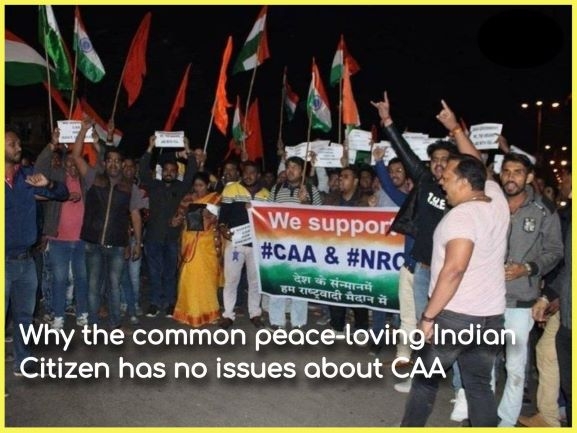 Citizenship Amendment Bill passed in Parliament after a most heated and detailed discussion. The Home Minister repeatedly cleared the air about being the CAB anti-Muslim. But some political entities repeatedly took the false propoganda regarding the CAB.
Union Minister Amit Shah tabling the bill in the Upper House scathing a remark at the opposition asserted that the bill does not speak about the Muslims living in India. The opposition has been dragging the Muslim religion for no particular reason as the Indian Muslims have nothing to worry about, then for whom are these people concerned?
The Citizenship (Amendment) Bill seeks to amend the Citizenship Act, 1955, to provide Indian nationality to Hindus, Christians, Sikhs, Parsis, Jains and Buddhists fleeing persecution in Pakistan, Afghanistan and Bangladesh.
On Sunday, violent protests, stone-pelting arson and mob attacks had forced the Delhi police to enter into the premises of Jamia Millia Islamia to get the situation under control. But the flare has reached to mny cities and the riot like situation is haunting life of common citizen in many cities where SIMI and PFI led protests are reaching to a dengerous stage and the protests are becoming more and more violent.
In the Jamia violence case, the police arrested 10 people of criminal background. Many WhatsApp groups which were spreading the lies and provoking the protesters to reach the level of violence were found. Surprisingly, during the investigation no students of Jamia University were included among those arrested.
The Citizenship Amendment Act makes it easier for the non-Muslim immigrants from India's neighbours - Pakistan, Bangladesh and Afghanistan - to become citizens of India. Though the Bill doesn't spell it out clearly, but the fact that it entitled Hindus, Sikhs, Buddhists, Jains, Parsis, and Christians facing religious persecution in the three nations, to seek Indian citizenship, highlights the exclusion of Muslims. The Act says the refugees of the six communities will be given Indian citizenship after residing in India for five years, instead of 11 years earlier.
Thats why law abiding legal citizens of this nation are silent and the protectors of Bangladeshi infiltrators and Rohingya supporters are spreading the violent protests letting opportunities to sleeper cells of extremist and militant Islamic fundamentalist organisations, Popular Front of India (PFI) and Students Islamic Movement of India (SIMI)” the ministry sources were quoted saying by the report.
Twitter threads play an important role in spreading Facts too. Lets see this thread which says: Why the common peace-loving Citizen of India & Bharat does not need to worry about #CAA or about #NRC .

(1/n)Why the common peace-loving Citizen of India & Bharat does not need to worry about #CAA or about #NRC .

Many people have hijacked this issue & turned it into a communal issue for votebank politics. Let's learn about our citizenship laws & how you don't need to worry.
(2/n) If a person was born in India after 26th Jan 1950 & before 1st July 1987 have acquired citizenship by birth. It covers most our parents for us in our 20s. Therefore most of the youth today born before 2003 are automatically citizens by birth including #JamiaProtest student

(3/n) So what happens to children born after 2003? They're all citizens by descent born to fathers who are Indian citizens. It even covers children born outside of the country who can register their births at Indian consulates. The overlapping in dates guarantees your citizenship

(4/n) Many on social media have been trying to link #CAA & #NRC . First let's get to NRC. Its a legislation passed in 2003 ! 17 years back. #Congress had the time to amend it or repeal ot but they didn't. Let's delve deeper into the #NRC which is the next logical step from Aadhar

(5/n) The rules are an attempt to make a database of Indian citizens to regulate voting rights & help in distribution of subsidies & aid to ONLY citizens. The births and deaths have been extensively recorded in our country & the census one of the finest. 99% will not face issues

(6/n) This is the data you will need to provide to enroll in the #NRC . NOTE: It does not include any religion. It maybe a precursor to Uniform Civil Code and most of this data has already been collected under Aadhar. One might say Aadhar was the beta test of #NRC

(7/n) In a huge country with a billion plus population even a 10% error would be a huge disaster. Thus the rules provide for two stages of appeals. One to the District Registrar of Citizenship & then Registrar General of citizenship. After that use FR under Art. 226/32

(8/n) So will everyone have to line up in QUEUES to prove their citizenship? THAT'S OUTRAGEOUS. In reality a Census officer or govt servant will visit your house to collect the details about the whole family & children & elderly & the disabled.

(9/n) The list of documents for nation-wide #NRC have not been announced yet. List A includes documents either in your name or your ancestors name. Birth certificate/University records/birth certificate/Passport/Land records/LIC/bank account. Quite easy to procure these days.

(10/n) Here's the List B document needed if the List A document belonged to your ancestor and not directly in your name. The usual suspects with the addition of Voter IDs & Ration Cards

(11/n) So now when the fears have subsided I'm sure some of you are wondering what's the cost of #NRC & should we be spending money on it at this moment in time? The field work on it had already started in 2010. It's related to the census in many ways.

(12/n) The Registrar General of Citizenship has been functional since 2010 in #Congress Regime & another new notification was passed 2015. These #CAAProtests are a decade late. #NRC & #CAA2019 are not even remotely linked.

(13/n) #NRC was also supposedly conducted in the coastal areas of many states in 2010 including Andhra Pradesh, Gujarat, Goa, Maharashtra, TN, Andaman etc. The first step in securing the coastlines of India after the 2008 Mumbai terror attack. Where were the #CAAProtests then?

(14/n) This obscure page still left on the Census India website clearly shows that #NRC data was collected in the 2010-2011 Census. The ones opposing the #NRC for communal votebank polticis have facilitated it & funded it a decade back. censusindia.gov.in/2011-Common/In…

(15/n) The next Census in India will happen in the year 2021. As per the published schedule it will be a Census where the religion of the person will not be recorded. All other censuses before have recorded religions but not this one. Available at
censusindia.gov.in/2021-Schedules…

(16/n) Let's take pride in our Indian Citizenship & endeavour to protect it. #NRC is for the benefit of all citizens. The National Identity Card will help immensely in distribution of subsidies & aid & preventing corruption. Only citizens will be eligible to get benefit from govt
(17/n) #CAA2019 is an amendment to the existing law of citizenship by registration which removes certain impediments & expedites the process of granting citizenship Minority refugees facing persecution on the basis of religion in 3 neighbouring countries who came before 2014

(18/n) All existing citizens of India of all religions & ethnicities are already citizens by birth/descent u/s 3-5 of the Citizenship Act. #CAA2019 ONLY adds new sections without amending the existing law. 1st it excludes certain minorities from the definition of illegal migrant

(19/n) Illegal migrants cannot apply for citizenship under the existing law. #CAA2019 removes this impediment will be removed for minorities facing religious persecution in 3 neighbouring countries. A proviso is also added for the protected areas of North Eastern States.

(20/n) Does this mean no Muslim foreigner can become a citizen of India? WRONG. A Muslim can come to India with a valid visa can gain citizenship by naturalization after fulfilling various conditions given in the Third Schedule or be exemplary like @AdnanSamiLive

(21/n) ONLY TWO things being given to refugees facing religious persecution:
a) Opportunity to apply for citizenship by Naturalisation if they came to India before 2014.
b) Change of Naturalisation period to 5 years from 11 years.

(22/n) #CAA2019 doesn't affect the citizenship rights of INDIANS. So what exactly is the #JamiaProtest for? Are we so insecure in our belief in this country and our constitution that a few thousand persecuted refugees being given citizenship is a threat to it?
(23/n)Pan-India #NRC is a reality we have to face in 2021. It will be both economical & logical to conduct Pan-India #NRC in 2021 when the census happens. The planning for the Census 2021 has already started with appointment of officers & making of maps.

(24/n) I will answer every LEGAL doubt but kindly don't ask me to comment on the ideological debate. I have a bias in this issue as I am a descendant of Hindu Pakistani Refugees from Kot Sultan and Multan. I recuse myself from any historical / poltical debate. Thank you 🙏🏽🙏🏽
(25/n) Edit: Forgot the most obvious and First form of citizenship. Every person who was domiciled in India or one of whose parents were born in India at the commencement of the constitution became citizen of India by virtue of Article 5 of the Constitution of India.