Psychologist Anita Sharma breaks the silence on Twitter,
hitting the right cord to expose
our immature media and film industry
which only infuse the sex, indecency and violence. 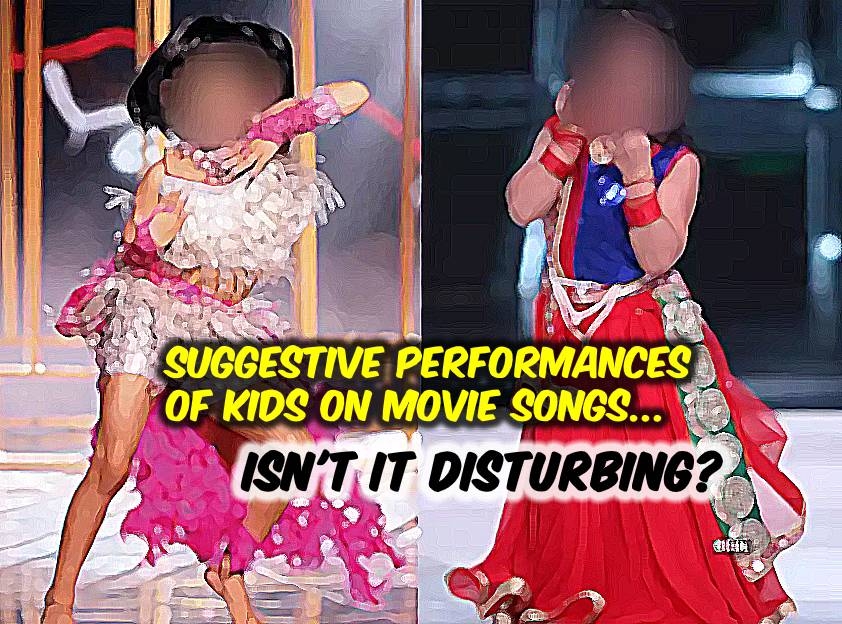 Anita says, "Media plays a very effective role in creating a serious impact on children, adolescents & adults. One side we applaud our young girls waving their body on "Beedi Jalai Le Jigar Se Piya Jigar Mein Badi Aag Hai" on the other side we expect it won't affect psyche who watch this dance."
It is everywhere..! the Parents and Moms are impatient to give greater exposure to their daughters through their 'performances' or stage shows. The baby girl or for that matter the boys just mimic the bold facial expressions and dance steps. Marathi movie Sairat was a big hit because of its rhythmic songs. Parents were seen to make their pals dance on the song with the lyrics
समद्या गावाला झालिया... माझ्या लग्नाची घाई...
कधी होणार तु राणी... माझ्या लेकराची आई...
(Everyone is eager for my wedding... When you shall be my Queen? I am eager to see you become Mother of my Kids!)
Every kid from age 3 to teens in 20s were dancing singing those lines.. girls were seen performing on this song with most seducing and vulgar 'steps' and a 'Mujra' kind of heavy makeup.
Raising alert about the kids dancing to Bollywood number portraying suggestive and bold moves, Ministry of Information and Broadcasting has taken a stern step. This comes as a welcome change, as kids are being put to practice inappropriate dramatisation in the name of the dance in reality shows on stage shows.
It is alarming yet controllable... let us pledge to make a healthy society with a healthy mindset.
Here is an eye-opener tweet series: Let us enlighten each other.
Archana Sharma
@archie229

Next time when you praise your small daughters dancing on seducing item numbers in public gatherings with same seducing expressions, plz consciously introspect about it. Our film industry crossing all limits to create an environment to elevated testosterone and we are endorsing it.
Media plays a very effective role in creating a serious impact on children, adolescents & adults. One side we applaud our young girls waving their body on "Beedi Jalai Le Jigar Se Piya Jigar Mein Badi Aag Hai" on the other side we expect it won't affect psyche who watch this dance.
No behaviour happens in isolation. Our senses keep receiving from the environment and keep reacting based on various factors including our personality type, temperament, a genetic endowment that covers the endocrine system as well. Behaviour is always learned and can be unlearned too.
It's easy to hate criminals for the various crimes they commit including rapes and murders but the difficult part is to identify the precipitating and triggering factors. We often consciously ignore our conscious endorsement to all the seducing stuff media is serving before us.
Item numbers have such an impact on our psyche that we are almost addicted to them. In the name of art we are all involved in creating seducing environment around us. I know many women here on Twitter who actively make seductive TikTok. Yes, they can but it has an impact. It's alarming.
twitter Media impact on Kids Reality shows TikTok