Lucknow, December 28: Going out of order and creating chaos, people vandalised and burnt public properties when they hit the streets in protest of Citizenship Amendment Act. Adding fuel to fire, many came out in protest creating unrest and disruption with damaging public properties. Taking view of this, the Muslim Community in Uttar Pradesh handed over a cheque of Rs 6.27 lakh to the district administration after the Friday prayers in the wake of damage to public property during the anti-Citizenship Amendment Act (CAA) protests which had occurred last week. This move comes after the stern warning given by CM Yogi Adityanath stating if any violence created, all properties of those involved in damaging public assets will be seized and auctioned to compensate for the losses. 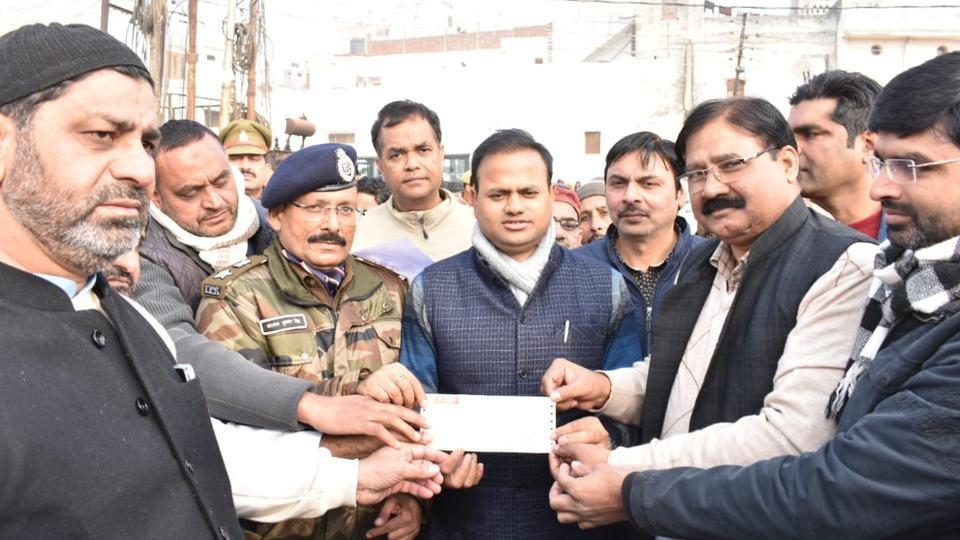 Yogi Adityanath gave a stern warning to all stating that if there is a question of maintaining peace in the state, his Government will not tolerate violence. Showing red-eye towards unnecessary protests, Chief Minister Adityanath in a strict tone said that there was violence in Lucknow and Sambhal and we will deal with it strictly. All properties of those involved in damaging public assets will be seized and auctioned to compensate for the losses.

The District Magistrate (DM), Bulandshahr, Ravindra Kumar appreciated the move by the community and said that it will ensure that such things will not happen in the future. The District Magistrate Kumar appreciated the move taken by the Muslim Community in Bulandshahr by coming forward and giving out this noble gesture. He said that they themselves estimated the value of the damages done and collected the funds which was handed over to them. Adding further he said, “I believe that with this we can also say that such incidents will not occur in the future and peace will be maintained.”

The state administration had deployed additional forces to ensure that protest over CAA in states do not go violent. Ensuring peace, Section 144, prohibiting the assembly of more than four people in an area, was imposed in various parts of the state in view of the law and order situation. Protests erupted in several parts of the country last week, including Uttar Pradesh, over the Citizenship (Amendment) Act, 2019, which grants citizenship to Hindus, Sikhs, Jains, Parsis, Buddhists, and Christians fleeing religious persecution from Pakistan, Afghanistan, and Bangladesh who came to India on or before December 31, 2014.