Terrorism: Need to awaken common voters about this threat to humanity 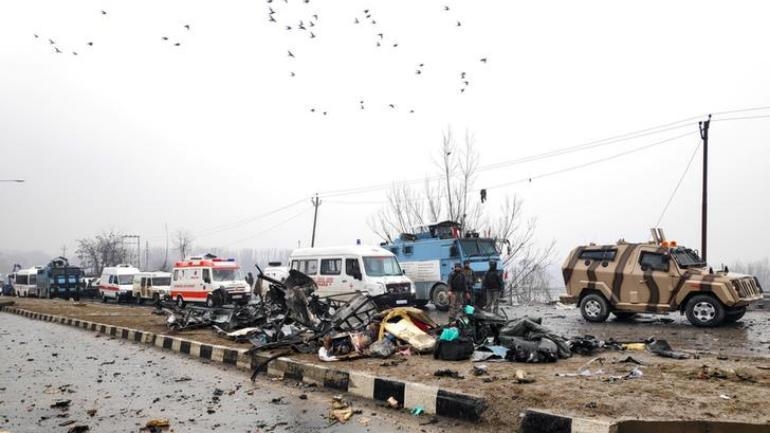 Undeniably, “Terrorism” must be a key elections issue particularly after the Pulwama terror strike by a jihadi terrorist that killed 41 CRPF in the convoy; 4 Army & 1 Police in counter operations.

Ipso facto, terrorism is multi-faceted – religion, race, caste, class etc. No color or creed difference – Supremacists all over. Add to them, alien mercenaries and “domestic lone wolfs.” Suicide bombers, Car bombs, IEDs and even stone-pelters are the new means. Terrorist leaders inspired by religion, particularly Islam, suffer from narcissism and megalomania. Radicalization is growing! Rise of fringe elements in other religions, particularly Hinduism, is by exception only.

To deter the most sinister Salafi-Jihadist terrorist threat engulfing J & K by non-state and state actors particularly from Pakistan besides other nations and other non-state actors particularly like the Al Qaida and ISIS, operating from alien lands is most challenging. Equally challenging is to counter “Lone Wolf” terror threats and ‘sleeper cells’. Hardly any credible ideological reform programs are in the horizon. At best, reactive, vis-a-vis proactive offensive strategic formulations remain under wraps.

Force, per se, cannot produce enduring peace and mankind’s history abundantly proves. “If terrorists/insurgents do not lose; they win. If so, nations must learn to live with such horror prospects.

For the first, a refreshing change, surgical strikes – land and air – have demonstrated political will and resolve to strike in adversary heartland. Otherwise, past strategic approach was mostly episodic, reactive and defensive. However, India’s punishment withstanding capacity is far greater than Pakistan.

Per se, surgical strikes deter adversaries temporarily; but they would resurface in different forms using highly ubiquitous ways and means. Nonetheless, India needs to launch pro-active “proxy wars” in Pakistan’s crisis spots with the same strategic alacrity as exhibited in 1971.

even keel and turn the battle of terrorism into adversary backyards to hurt those most. Weak vacillating leaders, fermenting and presiding political instability, will only embolden adversaries to strike at the roots of “Idea of India”. Thus, voters must make informed choice in favor of “Great leader and Political Stability.”

In particular, JeM led by Massod Azhar and LeT led by Hafiz Saeed are actively conducting the terror campaign across the border to “bleed through 1000-cuts” to destabilize and disintegrate India.

Most important, the All Muslim United Liberation Forum of Assam comprise over 40 outfits spread all over the Northeast to include: over 20 such groups in Assam alone and another five in neighbouring Manipur. For instance, the Islamic Sewak Sangha [ISS] is said to be assisting radicals in crossing the Indo-Bangladesh border, while the HuJI and HuM) help them obtain training in Bangladesh and Myanmar. Rohingiya influx from Myanmar/Bangladesh adds yet another complexity. What about Indian Mujahideen (IM) and the The Students Islamic Movement of India (SIMI)?

Since 2014, there have been 5-major terrorist attacks in Kashmir valley and Punjab: four attacks in December 2014 resulting in 21 deaths and several injured to disrupt assembly elections; Pathankot Air Base strike on 2 January 2016 in which four attackers and three security forces personnel were killed; Uri strike on army camp in September 2016 - death of 19 military personnel; 2018 Sanjuwan attack on February 2018 - death of 6 Indian Army Soldiers, 4 terrorists and 1 civilian besides 11 injured; and the recent Pulwama Strike – 41 CRPF killed.

What is the root cause for the present onslaught of terrorism in J & K? Simple. Murder of democracy due to electoral malpractices during elections in 1987 - widespread rigging and fraud vote counting, besides rampant corruption.

Who are responsible and accountable for the electoral fiasco in 1987, which was most sinister murder of democracy? The credit rightly goes to Farooq Abdullah of the National Conference and its ally the Congress Party led by Rajiv Gandhi. Ironic today, the murderers of democracy, that is, Abdullah dynasty in alliance with the “Gandhi Dynasty” are championing the cause of democracy today.

Ipso facto, in 1987 Muslim United Front workers were arrested prior to the polling date. Followed rigging and the most despicable vote counting fraud, wherein candidates elected who were not winning like in Amira Kadal-Srinagar, Handwara, Pulwama, Bijbehara, Wachi Shopian, Sopore, Anantnag and other constituencies, were declared elected. In some constituencies, the rejected votes were far higher than the margin of victory for the alliance. It shook the ordinary people's faith in the elections and the democratic process.

The NC-Congress alliance won 66 seats in the Assembly: NC winning 40 seats of the 45 it contested, and Congress winning 26 out of 31 (5 out of 6 contested seats in the Valley). With over 31% vote percentage, MUF only won 4 seats. What a gigantic fraud on democracy?

As per media reports, the MUF may have lost approximately 15 to 20 seats due to electoral malpractice. Governor Jagmohan was reportedly appalled at what happened, but he was ordered by the central government in Delhi not to interfere.

Abdul Ghani Lone became a separatist leader after the 1987 election and stated that many young people, out of frustration with the democratic process, decided to go for an armed struggle. Rest is recent history.

Next, “Out of sight; Out of Mind” aptly exemplifies Delhi’s approach and attitude towards insurgencies in the North East. Their growth was also due to murder of democracy in the region and Delhi’s total insensitivity to accommodate local people’s aspirations or demands for autonomy. Corruption was all pervasive. Gun-Opium-Contract-Liquor culture promoted and consolidated. Looting of primary forest wealth was encouraged. Latest is the controversial Citizenship (Amendment) Bill 2016.

Even the policies and plans to counter LWE threat in the “Corridor” extending from the borders of Nepal to Kerala have not made significant breakthroughs in containing the threat.

In sum, the holistic internal security threat perspective on account of terrorism/insurgency is extraordinarily complex and awesome. Each threat is different from one another requiring different strategic approach. No quick fixes available for resolution of threats that can be compared to “Multi Headed Ravana of Ramayana Epic” – severe one head, another springs up.

Yet another significant issue concerns past “Counter terrorism/insurgent strategic approach”: impose “President’s Rule”, employ security forces to contain and marginalize threats civic action programs to win over the hearts and minds of people, unilateral ceasefire initiatives to pave the way for peace talks and announcements of surrender, rehabilitation and resettlement financial doles.

Conduct of Track II peace talks through negotiators/intermediaries is carried out endlessly stretched over many decades. In quite a few scenarios, political leaders and bureaucrats pay large sums as taxes to insurgents for survival. Also, political leaders get elected based on support or fiat of insurgent organizations and act as their overt leaders.

Is it lack of political will that is the cause for proliferation of terrorism/insurgencies? Or, is it that their complexities have passed beyond political and bureaucratic intellectual competence to resolve?

Seizing opportunities is the acme of leadership. For example, during 1986-88, ruling regime at Delhi failed to seize the opportunity to accord “Union Territory” status to the Konyaks by merging Mon District with their kin in the neighboring Tirap District. Similarly, the long pending demand of Tanghkuls of Ukhrul demand to merge with the rest of Nagaland. Surely, if a small territory like Goa and Puducherry could be granted Statehood/UT status, the demands of various rebel groups for ‘self rule’ could have been granted long ago instead of adopting the “Autonomous District Councils” route!

In the past, the “Foreign Hand” was invoked as the cause for growth of terrorist/insurgent activities like China’s active support to Naga insurgents. After the Shillong Accord in 1970s, China’s abetment and assistance almost completely waned. Now, reports are available about Chinese forays.

Pakistan’s active involvement in J & K started with General Zia’s “Op Topac” having realized after their failed military forays in 1965 and 1971. And, the hybrid proxy war continues through sponsored terrorist organizations like the JeM and LeT among many others.

Today, Pakistan’s diplomatic rebuttal and political bluster follows familiar script after every major terrorist strike: “India’s knee-jerk" reaction blaming Pakistan and threatening it”; “India must come out of denial mode”; and so on. Thus, the verbal demarches follow usual scripted lines on both sides. Apart from making a lot of noise, they are unlikely to yield any positive results to both sides.

Pakistan’s Foreign Office statement issued following the Pulwama incident rejected India's allegations because they were "made within a short time from the attack and without carrying out any investigations". The Foreign Office tweeted that a "deliberate anti-Pakistan frenzy is being spurred in India", and warned that "baseless Indian allegations and aggressive rhetoric are counterproductive and a threat to regional peace".

Lack of focus is real over psychological dimension breeding alienation from the national mainstream. Forgotten is the Mongoloid civilization that has taken to “Baptist Christian Ideology” due to Nehru’s liking for Vevier Elwin’s concept of allowing tribes to adopt alien religion. Also, large tracts of North East have common borders with China.

People of North East working in the rest of the country must be treated with utmost respect as their esteemed guests; but not teased, heckled and insulted.

Modi led NDA has adopted the “Act East” policy in 2014 which was actually enunciated by Narasimha Rao but remained on paper for over 2-decades, particularly during 10-year UPA rule.

Viewed in the holistic internal security perspective, bold decision making holds the key. The past appeasement, and procrastinating approach – time alone can find solutions – will be disastrous.

Vital imperative and compulsion for voters to exercise their choice in favor of political stability and a “Great Leader” to effectively counter terrorism/insurgency effectively so that peace so vital for progress and prosperity is consolidated. Voters must shed their narrow parochial obsession with caste and religions. If voters miss this opportunity in favor of political stability and “Decisive Leader”, then woe by to national security posterity. No point in blaming political leadership later for their woes.