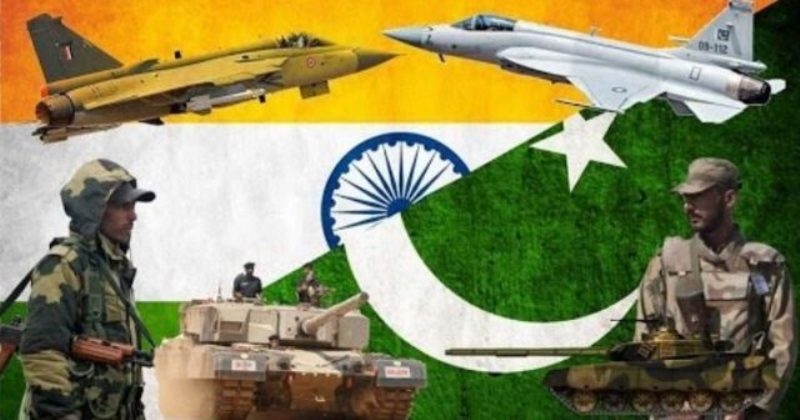 Jaish e Muhammad,a Jihadi Organisation from Pakistan carried out a dastardly attack on CRPF convoy near Awantipora in South Kashmir on 14 February, 2019, killing 42 Jawans. India retaliated by carrying out a massive Air Raid on Jaish Camps at Balakot, Muzaffarabad and Chikoti on 26 February, killing over 260 Jaish Jihadis. Not to be outdone; 22 Aircrafts of PAF sneaked in to Indian territory on 27 February, and dropped few bombs near Divisional Headquarters in Poonchh Rajauri area before being chased by IAF.

In the thick fog of air combat, Wing Commander Abhinandan shot down one PAF, F 16 Aircraft. His Mig 21 Bison was also fired upon; whether by same F 16 or an Antiaircraft Gun is still unclear. Now a Defence Expert from China has claimed that Chinese JF 17 downed Indian plane and not F 16 as claimed by Pakistan. Abhinandan had to eject over Pak territory resulting in his capture by Pak Army. However, he was released on account of hectic diplomatic activities after 60 hours.

This sparring between India and Pakistan threatened to spiral out of control. As per Western diplomats and Government sources in New Delhi, Islamabad and Washington; “At one stage; India threatened to fire at least six Brahmos missiles at Pakistan, and Islamabad said it would respond with its own missile strikes 'three times over'”.

All refused to reveal own identity or identity of their sources. The tensions suddenly worsened and threatened to trigger a war between the nuclear armed nations. It highlighted the fact that Kashmir is bone of contention between India and Pakistan and that it is one of the world's most dangerous flashpoints too. The exchanges did not get beyond threats. Indian missiles had only conventional war heads. But the activities at Pakistan nuclear establishment sites created consternation in Washington, Beijing and London which was based on comparative study of satellite imagery of these establishments on 14 February and subsequent days.

Nuclear Doctrines are difficult to interpret. The Army relies on their best laid plans, but the Government has to respond to the situation they are confronted with, even if it is the one they are not prepared for. These doctrines are geopolitically relevant in (a) Outlining what types of weapons are needed to support it, and which weapons are produced and are in the inventory, (b) Emphasizing that those authorized to fire nuclear weapons must hurriedly determine whether incoming missiles or artillery shells are armed with nuclear war heads/weapons and therefore whether to launch a nuclear retaliation? This has to be confirmed and orders passed, with very little time available for cool heads to think and decide and (c) Elaborate but precise structuring of nuclear command and control setup as also positioning of decision making autonomy correctly within the chain of command.

To elaborate, in the event of a nuclear exchange, does the Commander of a submarine with nuclear warheads have a direct line to senior leaders? If not, would the launch of a nuclear weapon in response to a perceived nuclear first strike by the Commander of submarine accepted by those in power? This is more so relevant because, the nuclear doctrine of both countries rests on the assumption that the country that strike first will, when the dust settles, still have a nuclear arsenal to retaliate with. To this end, India has second-strike capability of submarine launched ballistic missiles. Nuclear fire capable submarines, constantly moving in the oceans guarantee that India can retaliate if it sustains a first strike on land. Pakistan does not have this facility/ strategic freedom.

India’s air strike on the Jaish camp in Balakot, crossed a “Strategic Red Line” and called Pakistan’s nuclear bluff, so to say. Resultantly, Pakistan shut her entire air space for days, used its Air Force to try and target India, exchange heavy fire on land and send its entire Navy out on patrols for more than a week after the strike. As per comparative study of satellite images, there were some activities at Pakistani nuclear weapons storage and launch facilities after Pulwama attack. The images also indicate that there might have been an accident or incident near the Khuzdar Garrison Nuclear Weapons Storage facility in Baluchistan while unloading war heads. Such incidents are very rarely made public/discussed and other than human intelligence, satellite imagery is the only source to indicate what may have happened in the area. My efforts to draw the conclusion based on study of imagery available on Internet, may/may not sound authentic and one must take it with a pinch of salt as it could only be corroborated/confirmed by RAW/ISRO/IB/Defence Ministry.

Khuzdar Garrison in North East Pakistan is extremely well secured locations for the storage of Pakistani nuclear weapons. The main facility has two ‘Y’ shaped bunker shaving three bays each at a scale of one bay per arm of ‘Y’. Bays of first bunker are of 50m x 10m and that of second bunker are of 25m x 10m dimension. These ‘Y’ shaped bunkers are interconnected by a 210m x 10m long passage. Whole structure has six feet of concrete on Top. Total area is 2,850 square meters which can hold up to 46 weapons on Transporter Erector Launchers (TELs). Ground sources have confirmed that few operational units were inducted here after Pulwama attack which is confirmed by satellite imagery. Satellite imagery of 08 March 2019 also shows huge black burn marks measuring approximately 200m x 100mon small hillock next to the main road suggesting an accident. May be that, a missile fell off a TEL while loading back and the explosive burnt up the hillock.

Petaro Garrison located 18 km North of Hyderabad, Sindh in Mid Pakistan, is a modern underground warhead storage facility. It has a massive hardened underground structure with two ‘X’ shaped bunkers, each having eight bays at a scale of two bays per arm of ‘X’. Out of those, four bays are of 30m x 10m and four bays of 20m x 10m. Both ‘X’ shaped bunkers are inter linked/connected with 200m x 10m long passage. The total size, 4,000 square meters also has six feet of concrete on Top. This place can hold anything from 50 to 100 nuclear weapons/normal war heads and missile launchers. According to local sources, security fencing layers along periphery have been increased, weapons stored and a nine-hole golf course was built in late 2018. All this suggests that a large number of officers would have been/are posted at this location, possibly a brigade plus (6000 Soldiers).The recent satellite imagery shows large vehicular movement in this location.

Masroor Air base at Karachi in Southern Pakistan has a specialized bunker for the storage nuclear warheads which has underground automated vault system for the storage of RAAD missiles. Each automated vault system can hold 6-10 RAAD missiles; good enough to arm 3-5 aircraft, enhancing the PAF’s second strike capability. The warhead storage facility has a specialized square shaped bunker with extra revetments. The aircraft shelter has, seven feet; triple-layered hardening on top to ensure survivability from earth-penetrating weapons. The missiles’ movement from the storage bunker to aircraft shelter can possibly be controlled remotely. Comparative study of Satellite imagery shows hectic activities in this location post Pulwama attack.

A large number of Launch Pads, in groups of three, are spread all over Pakistan. Most of them are tucked in mountain gorges for the safety and security of nuclear/missile arsenal. Every circular launch pad is of 35m diameter which has a small square dugout for accommodating the instrumentation vehicles.

Pakistan thinks that; she has compelled India to abandon the ‘Cold Start Doctrine’ which superseded “Sunderjee Doctrine” prevailing from1982-2003. Propagated in 2004, CSD professed sudden and swift, large scale military action. Pakistan countered this by deploying Tactical Nuclear Weapons (TNW) which comprises of, limited yield nuclear bombs to be used against advancing Indian Military Columns. TNWs were mounted on60 km range Nasr Missile, deployed 60-80 km from IB, to be fired from the Garrison itself within the shortest possible preparation time. Threat of deploying TNW also foreclosed all options for a conventional war. India has a very clear Nuclear Policy of “No First Use” or NFU. However, the policy is vague in so far as, what would be construed as ‘First Use’; would it be Pakistani Preparation to Launch Nuclear Weapons, an Actual Launch of Nuclear Weapons, or even a Crossing Over into Indian Air Space. This Pakistani concept for “Strategic Deterrence” is, however, flawed as Indian formations can easily reach the strike distance of 80 km that includes Nasr Garrisons. Pakistan could be underestimating the resilience of the Indian Army leadership.

Two TNW Garrisons are located, one each at Gujranwala in North and Pano Aqil in South Pakistan. Gujranwala TNW Garrison has two High Bay garages, each of 128 m x 20 m dimension with automated blast doors. Both High Bay garages are connected with a covered pathway to Defence Electronics Systems (DES) Igloos, each of 15 m x 16 m dimension. There are four sub garages of 32 m x 17 m in each High Bay garage with five vehicle parks per sub garage for Tractor Erector Launchers (TELs) with support vehicles. Five blast-proof ammunition bunkers, each of 25 m x 18 m dimension have been constructed with revetments suggesting a Support Role for the facility. There are two large support areas with High Bay garages for possible repair and maintenance of the weapons, TELs and support vehicles. There is Command and Control, Administrative and other Support Buildings observed at this facility.A four layered security has been provided, with the innermost being a solid fence with raised watch towers. Large number of vehicle tracks could be seen in satellite imagery indicating feverish activities during this period.

Pano Aqil TNW Garrison has a single High Bay garage with 380x 20 m dimension fitted with automated blast doors. It is connected with a pathway to the DES Igloo. There are nine garages at this facility, slightly larger than those in Gujranwala with 40 m x 18 m dimension. It also has a support area, Command and Control, and other Administrative Buildings. It also has five ammunition bunkers with exactly the same configuration. The facility has a large open area, suggesting that some expansion has been planned for this facility in the future. The size of the garages indicate the possible expansion will be larger TELs, possibly that of Abdali or Ghaznavi Missiles. A similar four layered security has been provided, with the innermost being a solid fence with raised watch towers within visual contact of each other. There seems to be less activity compared to Gujranwala here during same period. Pakistan seems to have deployed total of 24-36 TELs with Nasr missiles in both these places. Although Nasr missiles are dual use, there is a need to count 36×4 nuclear/normal warheads (each launcher with four missiles). This deployment indicates Pakistan’s perception that target priority of ‘Indian Cold Start Doctrine’ is Shakargarh Bulge between Pathankot Jammu and Thar Desert.

The clouds of full scale nuclear war loomed large over Indian Subcontinent during 26 February till American President, Donald Trump, gave a clear indication of defusing situation on 10 March,19 with the words,” Something good and positive is going to come out today”. There were hectic activities seen in Pak Nuclear Establishments suggesting that Pakistan was almost on the verge of “NUCKING” India by firing TNWs if India were to/seem to strike again or mobilize its forces for CSD. To avoid this and afraid of massive Indian retaliation; number of parleys took place between Indian National Security Adviser and American Secretary of Defence on one side and Pakistan Foreign Minister and Chinese Defence and Foreign Minister on other side with Saudi Arab meditating between India and Pakistan at the same time. Ultimately, better sense prevailed on both sides. With Indian Prime Minister taking the lead to greet Pakistan warmly on its Founders Day on 23 March,19 and Pakistani Prime Minister reciprocating in the same manner, situation seems to have returned to normal as hitherto before. But the Big Question is,” WILL IT LAST, IF SO TILL WHEN?”