Madam Soniaji, you are right, this election is different! It’s an ideological war!! 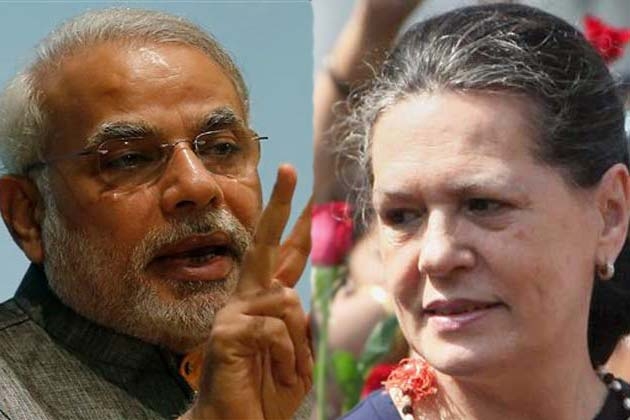 She also said that the Congress will continue to fight to defend the ‘buniyaadi usool’ (basic principles) of the Constitution. It has to be decided that whether those destroying the society will govern or those who take the county on the right track will get the rein of power, the Congress leader said.

Well said Madam Soniaji. You are very rightly asserted the nature of the 2019 election. This election is definitely an ideological war between the two schools of thought – one that considers India a nation born on August 15, 1947 and the other that believes in ancient, rich, humane and universal culture and traditions that believe in ‘Vasudhaiva Kutumbakam’ (The entire earth as one family), ‘Sarvepi sukhinah santu’ (Let all be happy) and ‘Ekam Sat Viprah Bahudha Vadanti’ (Truth is ONE and wise men describe it variously).

You and your party have taken for granted that no one will dislodge you and your family from the seat of power for eternity. But nothing is permanent in this world, and the wise and matured electorate of our country gave a very stern message to you and your party in 2014. But you simply refused to read the writing on the wall. Now the same electorate has decided to write off the party launched by an alien 130 years ago as a ‘safety volve’ in 2019. It was the last wish of the Mahatma, by whose name you swear day in and day out shamelessly, to dissolve the Congress, wasn’t it?. Now the time has come to fulfill that desire of the great savant of humanity. And that is what that makes this election an extra-ordinary one, Madam Soniaji!

For the first, the Congress party that enjoyed unhindered and uninterrupted over six-decade rule of this vast country since independence is reduced to a ‘not wanted’ political scrap. The other secular parties that had sprung to life drawing their elixir of sustenance from the Congress, today have simply refused to grant the number one position to your party. They dare challenge the Congress leadership to be satisfied with the two seats they left for it in Uttar Pradesh - the state Congress ruled once. What an unfortunate fall from the grace!

The most regional parties like TMC, BSP, SP, RJD et el, decided to shun Congress party and its leaders. This has happened for the first time. The Congress that led the United Progressive Alliance (UPA) of these like-minded parties for more than a decade has no respectable place in the Mahagathbandhan or Mahamilavat as Prime Minister Modi described the conglomerate of these parties. That makes this election different for the Congress, isn’t it?

Well. You must know and remember what happened to the Constitution and its Preamble in 1976 during the Emergency and who did it. Though the nation knows, maybe you are ignorant or pretending to be one. It was the Congress under the leadership of your Mother-in-law Indira Gandhi who destroyed the Preamble of the Constitution framed and drafted by Dr Babasaheb Ambedkar by introducing ‘Secular’ and ‘Socialist’ words. It was she who imposed the emergency brazenly violating the Constitution to save her CHAIR and put thousands of innocent citizens behind the bars for no fault of theirs for months together.

It was again the Congress party under the leadership of your husband Rajiv Gandhi that overturned the Supreme Court verdict in Shan Bano case by bringing in a Constitution amendment to deny the right of the Muslim women in India. Madam Soniaji, you probably need to refresh your memory.

And again it was your own self Madm Soniaji. You constituted the National Advisory Council (NAC) overstepping the Constitutional limitations to fulfill your desire to bring about the ill-conceived Communal and Targeted Violence Bill in 2011. Framing the laws is the business of the legislature. The NAC had no Constitutional or Statutory authority to frame the law but under your chairmanship, this was done and the UPA government was about to push for the passage of this bill which would have singularly targeted the Hindu society. But for the strong opposition this bill could not be converted into an act. Was this not a flagrant violation of the Constitution, Madam Soniaji?

And still you claim to be protector of the Constitution and blame the BJP for destroying and defying it?

And on what basis Sonia claim to be the savior of the Constitution? In fact, all the parties in the Mahagathbandhan have, as the Prime Minister said, realized that they stand no chance to power after the three phases of election and now they are looking for excuses to defend their poor performance post election.

Preserving Constitution, blaming EVMs and so on are their new excuses in their defence. These opposition parties including the Congress have no choice but to accept the defeat. The leaders of major parties constituting the Mahagathbandhan have raised doubts about the credibility of EVMs and renewed their demand for verification of the machines.

Again it is the BJP that is contesting maximum seats in this election. That means no party, not even the Congress has enough number to form the government post election. And the irony is those parties contesting 20-25 seats are dreaming for the Prime Minister’s chair. What an irony! The country had experienced the vagaries of such minority governments in the past and how they flout the constitution. Now they are in no mood to repeat that horrifying experience. That is why they voted the BJP-NDA to majority in 2014 and they are going to repeat that performance in 2019 too.

That makes this election different, Madam Soniaji, better you understand it soon.