Save democracy to save Bengal 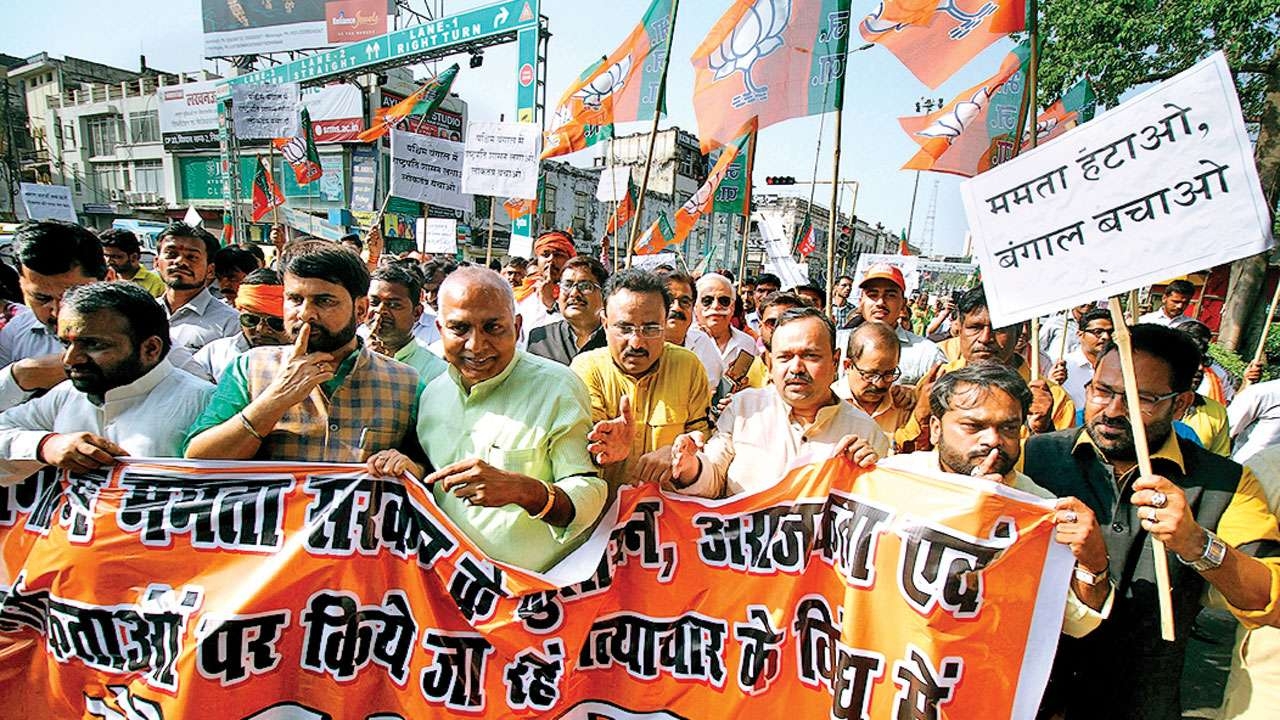 Mayhem or Murder of Democracy in West Bengal is real. More importantly, national security interests are at stake.

The reasons are simple. Mamata Banerjee, Didi, firebrand maverick and street fighter, does not want to cede political space at any and all costs to Modi and the BJP. So, it is “No Holds Barred” political battle on the streets of West Bengal with stones, sticks and even swords by the “goons’ on both sides.

Latest crackdown by the Election Commission (EC) is too little and too late. Having experienced the “Murder” of democracy during the West Bengal “Panchayat Polls”, the EC should have cracked the “whip” immediately after the violence of the “First Round” of the current elections.

Fools are those who ever thought that elections will be held in West Bengal in a peaceful and fair manner what with the “Street Fighter” Didi announcing her Prime Ministerial ambitions loud and clear with all the leaders of “Mahaghatabandhan” on stage in Kolkata in January 2019 “Modi govt’s expiry date is up”.

In retrospect, “Street Fighter Didi” has ratcheted up communal violence explosion during her rule as Chief Minister in 2011. Today, West Bengal is sitting on the “Communal Powder-keg” ready to explode at any time.

Fake news and provocative statements are going viral on the social media networks and spreading communal hatred and distrust.

Modi quite prophetically summed up the emerging crisis explosion in West Bengal: “it's a matter of grave concern for all those who believe in democracy, that West Bengal was drenched in blood during elections, there was a bloodbath there. Today, West Bengal is becoming a big challenge for all of us.”

How real is Modi’s prophetic forecast about the crisis explosion in West Bengal? Is West Bengal sitting on a “communal time bomb” all set to explode in posterity?

To prevent West Bengal’s slide into the disastrous trajectory of communal polarization and violence is not easy. A series of communal conflicts occurred in Chandannagar, Hazinagar, Kharagpur, Chanchal, Baduria, Basirhat among many others have irretrievably driven deep wedge among rival communities.

Now, it is very clear that religious occasions of the Hindus and Muslims, which used to be celebrated in peace and harmony for centuries in the past, are being deliberately targeted by communal and criminal elements of both communities to engineer communal conflagrations and fan mutual hatred. There is a distinct method in this madness. 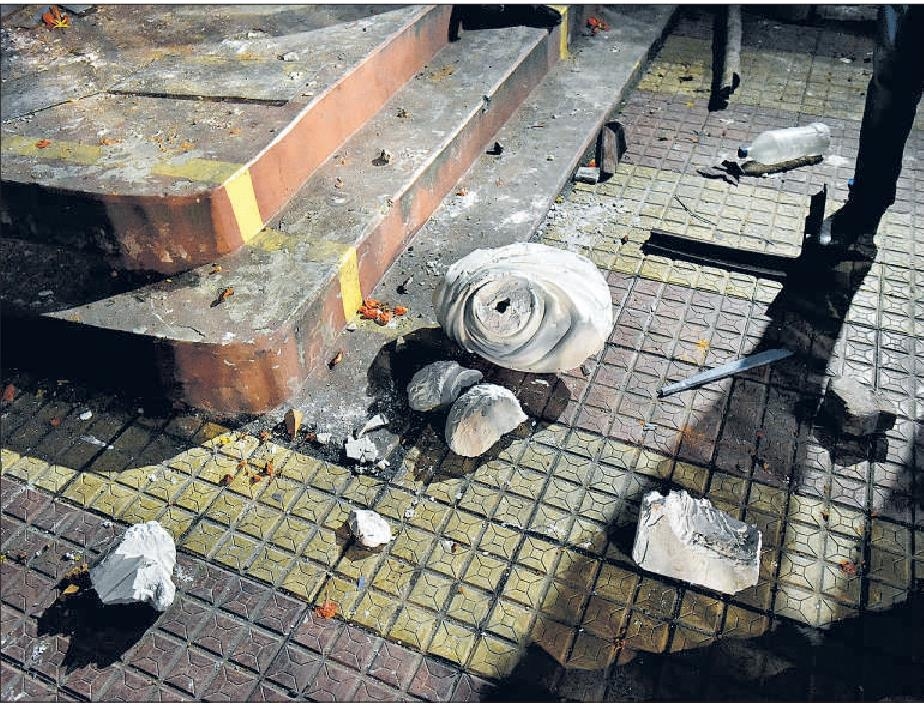 Of course, “Street Fighter Didi” blames the RSS-BJP for playing the most pernicious role in misusing religious occasions to facilitate communal polarization in Bengal today, particularly during the Ramnavami celebrations in April 2017 and the “Durga Immersion”.

What is the reality? Defying the secular principle of separating religion from politics, the “Street Fighter Didi” has deliberately mixed the two from the very inception of her rule, besides accommodating fundamentalist sections within the Muslim community within her party.

Communal elements within the Muslim community have been systematically encouraged by the TMC government’s policies of announcing stipends for imams, trying to stop the immersion of Durga idols on the day of Muharram procession last year or senior ministers of the TMC Government actively participating in a AIMPLB rally on the triple talaq issue in Kolkata last November, when the matter was still under the apex court’s consideration.

The most alarming aspect of the recurring communal violence in West Bengal is the absence of any punishment for the perpetrators. In all the incidents that have recurred during the last one year, the miscreants have seldom been arrested. In rare cases of some arrests, they were later set free, succumbing to communal pressures.

While ordering an inquiry, however, the chief minister has tried to shield the perpetrators by blaming forces from “across the border” for the misdeeds. Even if religious extremists from Bangladesh had a role in the violence, it could not have occurred on this scale without local collaborators. Unless these miscreants are clearly identified and brought to justice, irrespective of their religious and political background, the mutual distrust among the Hindus and Muslims will only grow.

Lesson of Indian history is all set to repeat itself due to historic shortsightedness. Two significant historic milestones include: 1940 Lahore Resolution, that the Muslim-majority areas of India in the northwest and the east, should be constituted as 'independent states’; and the Direct Action Day (16 August 1946) announced by the Muslim League Council to show the strength of Muslim sentiments towards its demand for an "autonomous and sovereign" Pakistan.

The “Direct Action Day” resulted in the worst communal riots that British India had seen - known as the “Great Calcutta Communal Carnage” - more than 4,000 people lost their lives and 100,000 residents were left homeless in Calcutta within 72 hours. It sowed the seeds for the eventual Partition of India.

Sooner than later, “Street Fighter Didi” and the Bengali Hindu’s must be prepared to face the wrath of the Muslims to demand Muslim homeland and even join hands with the ISIS to declare Islamic Caliphate of West Bengal.

From the viewpoint of institutional politics, the West Bengal communal violence during the “Street fighter Didi’s” rule holds dangerous portends for the Bengali Hindus. Let none suffer from illusions on the above count.

Let me recount the dynamic demographic transitions that have taken place since 1947: “The growth data of Muslim population in West Bengal and Assam is certainly a matter of national security concern. In West Bengal, Muslims constituted 19.85% in 1951; and 27.01% (2.45 crores in real numbers out of total 9.12 crores) in 2011.”

As per forecasts, the Muslim population is estimated to increase to over 30% in West Bengal. More important, there will be Muslim majority population over the Hindu population in almost all the bordering districts.

Add to them, the rapidly altering demographics in neighboring Assam what with 9 districts out of 27 with Muslim majority.

Added together rapid demographics sweeping the East and NE region and viewed in the background of surge of radical Islamists groups in the region aided and abetted by state and non-state actors, and the Rohingiya Muslim refugee influx, the “Communal Cauldron” is viciously churning due to appeasement politics of “Street fighter Didi” to somehow cling to power.

The choice before the Bengali Hindus is simple. 2019 elections is the last chance available to them before them all over again find themselves in the midst of “Communal Genocide” and become refugees.

In sum, it is also the battle to “Save Democracy” from the dictatorial rule of “Street fighter Didi”. And, the future of national security of modern India is at stake. Bengali’s must not allow the pretenders of “Save Democracy” like the TMC and Mahaghatabandhan to pave the way for the splinterization/disintegration of modern India.