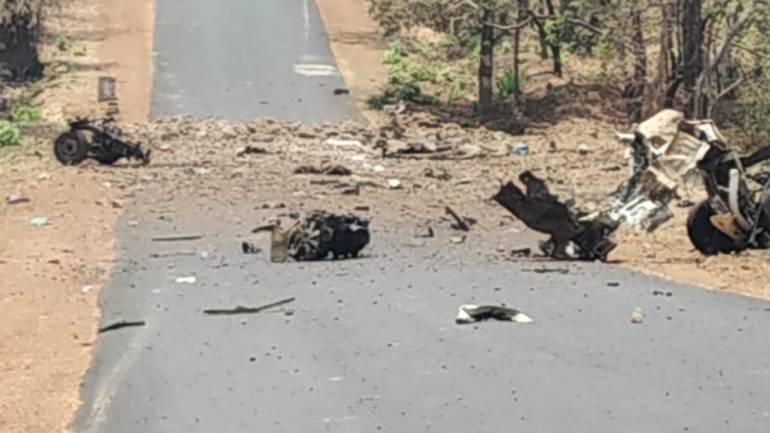 “It was a sad coincidence for the police that when 102 police officers including four additional SPs were being honored at district headquarters with the DG Insignia, 15 of their colleagues fell to the one of the deadliest ambushes by the Maoists in Gadchiroli district”, the Maharashtra DGP lamented.

And indeed, it was a sad coincidence to happen on the 59th Foundation Day of the State!

The brave C-60 commandoes of the Quick Response Team of Maharashtra Police did not have the slightest of inkling of what was awaiting them when they were moving in a private bus towards Dadapur on Wednesday. As their vehicle reached the Lendhari nullah close to Jambhulkheda village just six km away from Kurkheda, the Maoists laying in ambush exploded the IED (landmine in colloquial parlance) blowing the bus to pieces and killing all the 15 commandoes and the driver of the bus on the spot.

Sad indeed! Sad because it happened on the 59th Foundation Day of the State. Sad because it is beyond the realm of our imagination to visualize the incident. Death strikes and strikes in fraction of seconds. That is the only truth!!

The Maoists had burnt down 36 vehicles belonging to a private contractor at village Dadapur on Tuesday night. And this QRT commandos were heading to that same village for investigation. 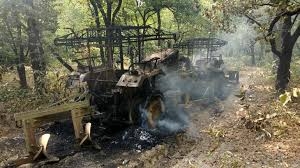 Over 150 Maoists armed with weapons entered the Dadapur village on Tuesday and set the vehicles on fire after breaking their diesel tanks. The vehicles included trucks, tractors and road rollers employed by a Durg-based contractor firm Amar Infrastructure Limited for the construction of National Highway No 136 stretch between Purqada-Malewada-Yerkad. The Maoists are against such development and targeted the vehicles to stall the road work.

The QRT commandoes were proceeding to Dadapur village to take stock of the situation and to contain the Maoists menace when their vehicle was blown to pieces by the powerful IED explosion. The blast triggered by the Naxalites was so powerful that it ripped through the bus and the passengers it was carrying with their pieces strewn all over the road. The private bus numbered MH 33 / T-0483 was hired by the cops obviously to give a slip to the Maoists. But the destiny had willed otherwise and the country lost 16 precious lives at just one click of the remote control.

The Maoists were observing the week-long protest to mark the first anniversary of Boriya Kanasur encounter in which the cops had gunned down as many as 40 ultras last year. And the IED explosion was planned as part of this protest.

As usual and formal the attack came under strong condemnation from all the top leaders and police officials. The Maharashtra DGP Subodh Kumar Jaiswal admitting that it was a big loss to the state police, termed that this attack was not due to intel failure.

Prime Minister Narendra Modi tweeted: “Strongly condemn the despicable attack on our security personnel in Gadchiroli, Maharashtra. I salute all the brave personnel. Their sacrifice will never be forgotten. My thoughts and solidarity are with the bereaved families. The perpetrators of such violence will not be spared”.


President Ram Nath Kovind said in a tweeter message: “Strongly condemn the terror attack in Gadchiroli, Maharashtra. Thoughts and prayers with the families of police personnel killed and wishing an early recovery to those injured. The entire nation stands united in the fight against such violence”.


Maharashtra Chief Minister Devendra Fadanvis who also holds the Home portfolio said: “Anguished to know that our 15 police personnel from Gadchiroli C-60 Force got martyred in a cowardly attack by the naxals today. My thoughts and prayers are with the martyrs’ families… I strongly condemn this attack and we will fight this menace with even more and stronger efforts”.

The State Governor Ch Vidyasagar Rao cancelled the reception of Maharashtra Day as a mark of condolence to the martyred soldiers. “The reception was cancelled as mark of respect to the police personnel who lost their lives in the naxal attack in Gadchiroli district”, official release by the Raj Bhavan said.

Apart from condemnation of such gruesome incidents we need stern and resolute action to wipe out the Maoist menace. The previous governments had failed to tackle this Maoist threat to the nation’s safety, security and integrity due to their lackadaisical approach. But now we have a strong government at the Centre and in the State. Still such incidents keep on happening is something that points to some serious lacunae in our security and intelligence apparatus.

If we trace the history of Maoist attacks on security personnel in the last some years, this lackadaisical approach stands exposed. The major problem in dealing with the Maoist menace is the approach to it. Unlike the terror threat, the Maoist menace is considered as a state level law and order problem. And the ground reality is exactly opposite.

Though at present the Maoists have been on the backfoot as Union Home Minister had claimed, they are not down and we must keep this fact in mind. A small spark is enough to cause the wild fire and an enemy however weak is enough to cause the damage. The spread of Maoist threat is from Pashupati in Nepal to Tirupati in the South India. They call it Red Corridor. And their aim is very clear. They want freedom from India. That is, they indulge in a straight war against the nation. Therefore, that cannot be considered as a state-level law and order problem.

The Narendra Modi government has shown its firm resolution and determination to end the terrorist menace. The surgical strike or the latest air strike on terrorist training center in Balakot in Pakistan are the best examples of this resoluteness of the government. However, why this government has not adopted such measures to end this Maoist menace is a question that keeps nagging whenever such terrible attacks take place.

The Maoists have a strong network of supporters and sympathizers in the urban areas and they lend all possible logistic help and assistance to them as and when necessary. It is true that in the recent days, the government has busted this network of the Urban Maoists as they are called after the Koregaon-Bhima incident. The arrest of top Urban Naxalites like Prof G N Saibaba, Sudha Bharadwaj, Gautam Navlakha, Varvara Rao et el has exposed the strong network of these Urban Naxalites. But that is not enough.

These urban naxals have a vast network of supporters, sympathizers and sleeper cells spread over important establishments of the government, media and NGOs. There is a need to expose this network in order to curb their activities.

There is no doubt that the exposing of urban naxalits has adversely hit the Maoists operating from the jungles. The demonetization move has chocked their fund resources and many of their cadres are surrendering out of the frustration. But they still need a strong, resolute and final blow to completely douse the ambers of Maoist fire.

1. November 10, 1991- 10 cops of SRPF killed in landmine blast and firing on Tumarguda-Bhamragad-Tadgaon road.

5. August 5, 1998- Five cops including three of the SRPF killed in blast and firing at Kotakonda

7. May 30, 2005- 7 cops killed in landmine blast and firing at Bevartola in Gondia district

8. October 26, 2008- Four cops killed in gunfight with Naxals at Korepalli in Gadchiroli

9. February 1, 2009 -15 policemen killed in ambush, landmine blast and firing by Naxals at Markegaon

11. October 8, 2009 - 17 policemen killed in encounter with Naxalites on Mallampoddur-Leheri road