Why the surge of nationalism is unstoppable? 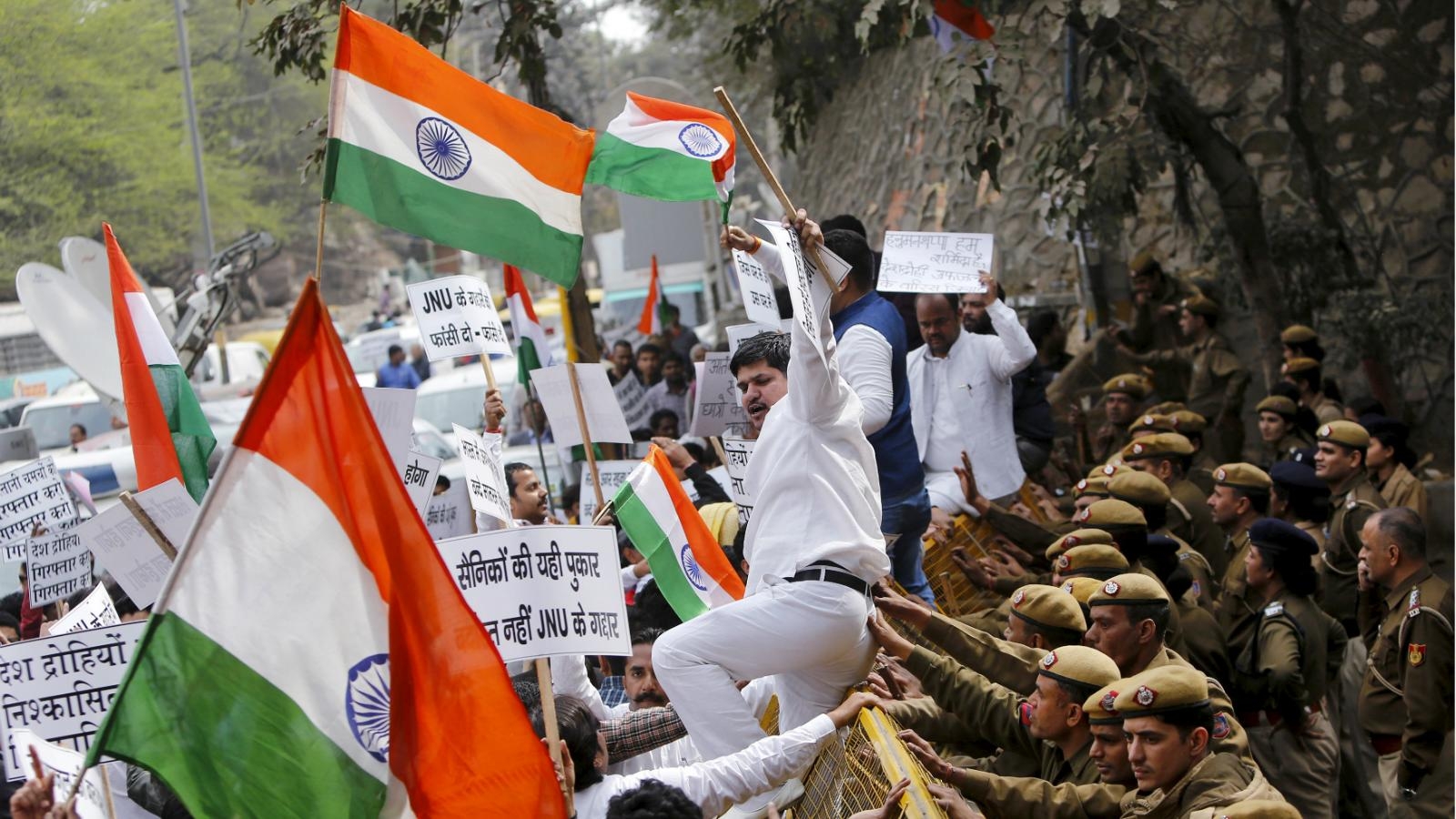 Why the surge of Nationalism is unstoppable and what form it would escalate and explode?

Most important to understand is the “Idea of India”, which is intellectually most contentious? Politicians, intellectuals and analysts have different interpretations.

The left of the center ideologues interpreted the “New Idea of Idea” based on the “secular” ideology, albeit Mahatma Gandhi exploited religion to gain political independence in 1947 from the British yoke.

The “New Idea of India,” is usually attributed to Nehru - secular, pluralist, polity that belonged to all Indians and not to any one group. In particular, India did not belong to the Hindu majority, which constituted 80 percent of the country’s population. It was this secular idea that created India in 1947, not as the Hindu mirror of a Muslim Pakistan, but as the pluralist opposite of majoritarian nationalism.

Less known is the shifts made by Nehru’s successors who gave up pluralist idea due to electoral compulsions. Indira Gandhi stoked the anxieties of the Hindu majority in her election campaigns in the early 1980s. His grandson Rajiv Gandhi courted the Hindu majority by launching his 1989 election campaign from the town of Ayodhya and calling for “Ram Rajya”. Now, Rahul Gandhi is flaunting his own Soft-Hindu credentials by offering prayers at various temples including pilgrimage to Mount Kailash in Tibet and claiming to be a devotee of Shiva.

Opposing them is the right of the center ideologues interpreting the “Old Idea of India” based on historic past of “Hindutva” ideology based on blend of nationalism and patriotism.

Today, democracy and disorder are explicit and real. Dynastic feudalism is the order of the day. If so, sooner than later the prevailing disorder will descend into anarchy and chaos what with the new political entrants staking their claims for leveling playing field to them to gain access into the portals of power.

Given the current surge of highly volatile and incendiary political rhetoric and violence during the elections, what does future holds for modern India is a million-dollar question? The highbred Tsunami-cum-Tempest churning unleashed by political rivals through oft-repeated lies and personal jibes have crossed all limits of decency and set the diabolical course for political events and developments to unfold or emerge in posterity in modern India.

It is never too late or high time that all alike recognize and admit that the “Mother of all Strategic Challenges – demographic transitions” as the root cause or internal security threat in being preventing modern India’s integrations.

However, India’s policymakers refuse to admit openly during the electoral campaigns that the “Mother of Strategic Challenges” is the root cause for the most powerful, and pervasive factor of social and political changes, which are adversely impacting and influencing all aspects of sectors, jobs, or local communities due to vote-bank appeasement politics.

Job opportunities, quite obviously, is the key concern of unemployed youth. No need for political leaders or media houses to trumpet it as the “Core Issue”. Yet, none of them have laid out strategic road map to tackle the problem.

Realize all alike that the West led by the USA and Europe are shutting the doors for even legal migrations for highly skilled personnel. Thus, their “hopes and promises” in alien lands are on the backburner or on “Hold” as part of globalization processes. Consequently, “Job Crisis” is bound to explode.

After all, even China following modernization plans in a single party rule dating back to 1984 with almost double-digit economic growth is today facing the challenge of economic downslide. So, youth to expect to miracles to happen in a messy-democracy hijacked by “feudalistic dynasty or neo-Maharajas” is most laughable and ironical.

In fact, none of the politicians, intellectual and analysts are prepared to admit direct co-relation between population explosion – surge of dynamic demographics - jobs and impoverishment. Consequently, economic inequality or stagnation is inevitable to explode in times ahead.

Viewed in the above environmental framework, the popularity of the nationalist rhetoric should not be underestimated and most likely to escalate what with media sensationalism to the fore due to crass insensitivity to their adverse factional fallout.

Today, nationalist parties—like the BJP — with the backing of Hindutva forces – VHP, Bajrang Dal etc. – are in the fore front presenting themselves as champions to save “Hindu Majority” from the damages likely to be inflicted in terms of impoverishment and inequality.

The BJP rhetoric claiming that borders must be closed and illegal migrations must be stopped at all costs and the National Register of Census (NRC) for the entire country must be prepared is intended to maintain the prevailing social, economic and political equilibrium.

Ipso facto, the “Migration Crisis” particularly in the East and North East region is real. After 1971, illegal migrations have poured across the porous borders and dramatically changed the demographics not only in the neighboring tracts; but also seeped into interior heartland. For example, the “Rohingiyas” have been resettled in J & K and even in Hyderabad. Consequently, low-skilled jobs and other subsidies are getting diverted to them at the costs of the “sons of the soil”.

Let me briefly record the reasons for the increasing unease leading to the popularity of nationalism in Europe which is also relevant to India today: “the development of two persistent social dynamics, the first trend driving individuals to fear their irreversible decline, and the second dynamic leading more prosperous parts of society to protect their increasing economic advantages and well-being.”

European experts have identified such a trend leading to “secular divergence - a trend that does not coincide with the obvious inequalities, and not even only with regional inequalities. It is rather a protracted sense of marginality felt by those who fear the unstoppable decline of their profession, community, or family, and a sense of detachment among those who instead protect their growing well-being in an unstable world.”

In fact, we have not been able to understand what was happening because it is actually something new that affects the credibility of democracy, public discourse, and its rationality.

As per European scholars, the credibility of democracy suffers from a temporal contradiction. If a government wants to, it can correct inequality in just a few months by changing tax levels and enacting redistributive policies. However, it takes many years, and sometimes decades are not enough, to correct the divergence, de-industrialization, or obsolete knowledge and technologies. If this unprecedented temporal contradiction between the popular vote and the solution to problems is not made explicit, then democracy, its cycles, and even its language will become worthless in the eyes of citizens.

As per philosophers and scholars, as long as the problem was the defeat of poverty, political competition was between leaders—either capitalist or communist, liberal or socialist. But if the problem is divergence between states, regions, ethnic groups, jobs, or individuals, then public rhetoric will aim to discriminate - aggressive, deprecating, dehumanizing.

In retrospect and reality, the rabid change in the public discourse during the 2019 elections is one of the clearest features of the new populist leaders. At the political level, the same language trickles down to individuals through the interaction of new and old media. If discrimination is consistent with hitting back against divergence, then injustice caused to others becomes a necessary means to achieve another type of justice. The objective observation of political costs and benefits becomes secondary and truthfulness may be only an obstacle. Irresponsible and uncoordinated do provide impetus to negative forces to prevail over reason. Consequently, the society rallies on sectarian lines in diametrically opposite ways.

Viewed in such a theoretical construct, Hindu nationalism is rediscovery and resurgence representing “Old Idea of India”; but with its many faces.

Just as Vajpayee’s ideological moderation obituaries have been written in the past, similarly, even obituaries may be written for Modi’s transformation into ideological Hindu moderation – compulsion of India’s polity, if he does not all over again change tack and revert to his old face depending on the outcome of elections.

Even Vajpayee, as an advocate of the majoritarian view, was no moderate. Vajpayee’s words and actions often transcended ideology. But when he did take an ideological position, it was unswervingly majoritarian. He sought to privilege Hindus over other religious groups. Only the emergence of even more extreme versions of Hindu nationalism allowed Vajpayee’s position to come across as middle-of-the-road. Even Vajpayee wanted a temple should replace the mosque in Ayodhya. He made a speech saying as much just the day before the mosque was demolished.

Ipso facto, the strident Hindu nationalists want recognition of the special rights of Hindus in a Hindu majority country. The strident Hindutva groups, particularly the unemployed Hindu youth, are no longer backward-looking citizens. They want their interests to be protected and promoted in India.

Next, the idea that some form of Hinduism should be recognized symbolically in some way by the Indian state resonates not only among both the cosmopolitans in urban areas but also the underprivileged in rural areas. They want Hindus to be recognized just the same way Pakistan recognizes Muslims and United States of America recognizes Christians: first-among-equals to become law. They demand guaranteeing equal rights to all citizens; no reservations or reservations based on economic criteria.

Be that as it may, Hindu’s need to reconcile their internal differences particularly with regard to “Cow-vigilantism and lynching”, “conversions or “Ghar Wapsi” and the NRC issues.

For example, some BJP leaders have been openly backed “Cow-vigilantism and lynching”. After all, some Hindus may hold cows sacred, but there are other who others don’t especially in southern and northeastern India. So, a ban on cow slaughter would discriminate against these Hindus and non-Hindus alike.

Next, assimilation of India’s non-Hindu minorities and has already been by used by the RSS and its affiliates to justify forcing Muslims to convert to Hinduism, a process termed as “ghar wapsi” or “homecoming.”

Furthermore, there are others who want recognition for Hindus as not only a religious majority but also a nation in themselves. This nationalist view has long been the position of the RSS and of RSS traditionalists within the BJP. It is also the position reflected in the Citizenship Amendment bill, a proposed law introduced by the BJP in 2016 and now under consideration by parliament, which seeks to covertly privilege Hinduism through amendments to India’s citizenship laws. Such proponents believe that not only should Hinduism form the basis of the nation but India should be a theocratic state with a religious leadership.

In 1964, as part of an effort to mobilize the Hindu majority, the RSS created the Vishwa Hindu Parishad, or “World Hindu Council,” whose professed goal is to unite the Hindu clergy on a single ecclesiastical platform. Although this is not part of the official platform, many in the VHP espouse a theocratic idea of the Hindu nation and have now developed an independent popular base.

In sum, the surge of Hindu nationalism is unstoppable if the existing demographic equilibrium is not safeguarded and sustained. The virulent vitriolic rhetoric of 2019 election is most venomous when viewed from the national security point of view. Political leadership and parties are squarely responsible for the same.