We can understand the collective frustration and anguish of the 22 opposition parties suffering from Modi-phobia when the complained to the Election Commission over the alleged tampering of Electronic Voting Machines but we cannot digest former President Pranab Mukherjee expressing concern over the same in a more polished language. 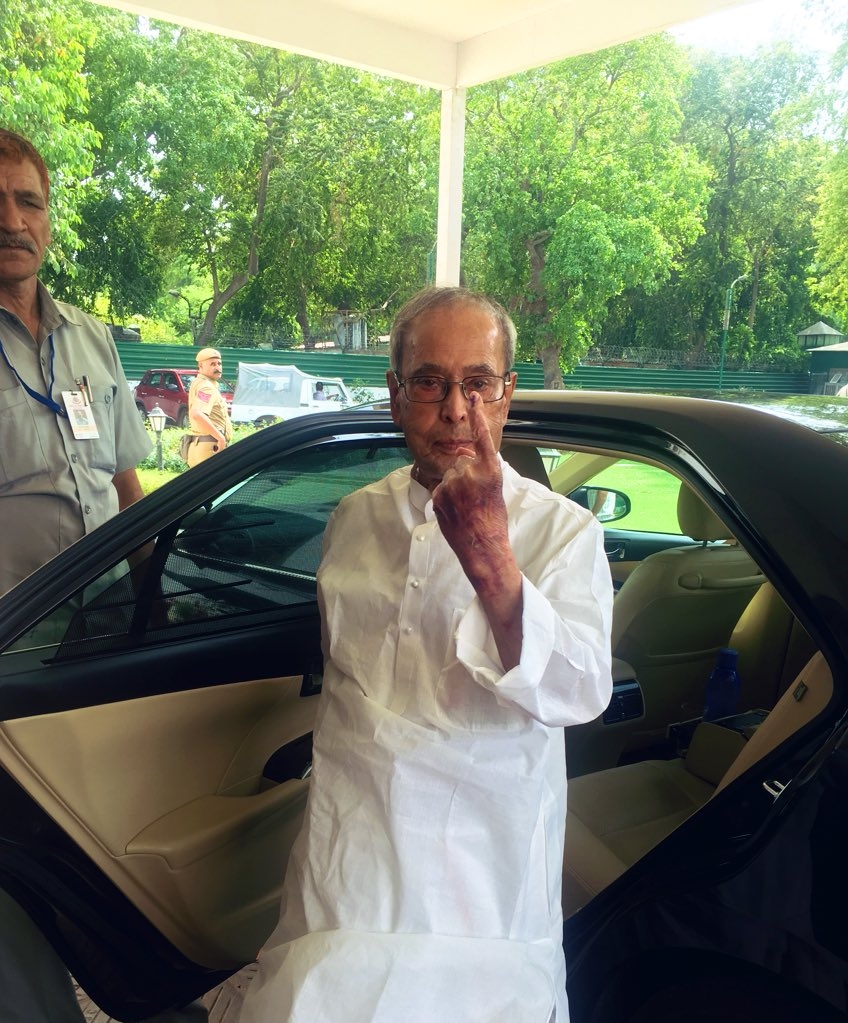 Remember, he had praised the same Election Commission just hours before he showed his concern over the alleged tampering of EVMs. Such a stark difference between his speech at a book launch ceremony Monday evening and his statement on Tuesday!

That prompted us to ask ‘Et tu Pranab Da?’

On Monday while releasing a book by Sonia Singh of NDTV in New Delhi, Mukherjee had praised the Election Commission for ‘perfectly’ conducting the elections. He said: “you cannot criticize them; it was a perfect conduct of elections”.

And on Tuesday afternoon he takes a complete U-turn and says: “I am concerned at reports of alleged tampering of voters’ verdict. The safety and security of EVMs which are in the custody of ECI is the responsibility of the commission.”

His statement further said: “There can be no room for speculations that challenge the very basis of our democracy. People’s mandate is sacrosanct and has to be above any iota of reasonable doubt. A firm believer in our institutions, it is my considered opinion that it is the workmen who decide how the institutional tools perform. The onus of ensuring institutional integrity in this case lies with the Election Commission of India. They must do so and put all speculations to rest.”

What went wrong in these few hours that Pranab Da had to issue such a statement providing ample room to the Modi-phobia infested opposition leaders? Was it because of his age or did he really mean what he said? We can only speculate until he comes out with an explanation on this diabolical stand.

The Election Commission time and again had clarified on the safety and security of the EVMs. The poll panel has also explained the tamper-proof nature of the machines. The Prime Minister has also vouchsafed the safety of the machines and expressed concern over the “needless controversy” raised by the opposition out of their collective frustration.

Against such a background this statement coming from a person non other than the former President of the country and a very senior Congress leader means something more than what just meets the eye.

The Exit Poll figures conducted by various agencies and news channels have confirmed the return of Narendra Modi-led National Democratic Alliance (NDA) of which the BJP is the major partner. These exit polls have also shown that the BJP alone can be in a position to form the next government on its own strength.

Though the exit poll predictions are just speculative, one cannot summarily reject them, especially when all the predictions are pointing to one direction. And this is what has sent panic signals to the opposition camp.

Unable to stop the Modi-Shah-BJP-NDA juggernaut in their respective states, these opposition parties first tried to hurl all kinds of expletives at Modi followed by raising doubts over the EVMs and now targeting the Election Commission. Some of them have even threatened bloodshed should the results go in favor of Modi and BJP after counting. Some parties are trying to force the Election Commission to cancel the entire poll exercise.

Against such background, the statement from Pranab Mukherjee tends to cast aspersions on the honesty, sincerity and integrity of the Election Commission. And his statement comes on the last but one day to the counting of votes giving a much-needed fillip to the opposition camp to sharpen their attack against the poll panel.

Or was he really worried over the game plan of the opposition to defame the institution of the Election Commission that performed its duty perfectly from the first ECI Sukumar Sen to the present incumbent? Mukherjee had said: “democracy can succeed due to perfect conduct of elections by the election commission and the persons heading this institution”.

The above observations came from Pranab Da a day after the Congress President Rahul Gandhi had referred to Election Commission’s ‘capitulation’ before Prime Minister Narendra Modi. And the next day he is worried over the safety of the people’s mandate which he feels is more ‘sacrosanct’ and reminds the poll panel of its obligation to preserve its sacredness. Strange is the behavior of great leaders like him!