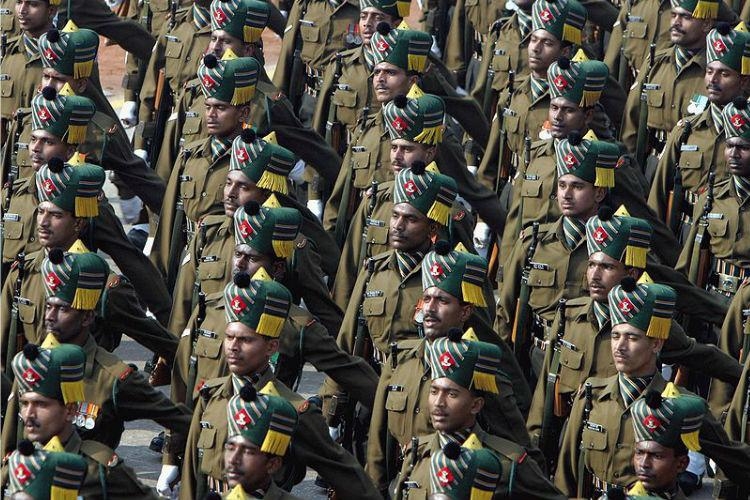 The cliché that “Indian Armed Forces are the last bastion of democracy” reflects the people’s trust and confidence in the Organization. People generally believe in “apolitical and secular credentials” of armed forces.

At the same time the “Holy Cow Syndrome”, a figure of speech for something considered immune from unreasonable question or criticism to malign its image, pre-empts in depth analysis of its strengths, weaknesses, opportunities and threats.

Perforce, the need exists to unwrap some of the riddles clouding the perceptions of majority of people over the issue of “Politicization of Armed Forces” to gain a balanced perspective of realities.

At the same time, Clausewitz most famous aphorism is "War is the continuation of politics by other means." Naturally, it represents the contrarian view of inextricable inter wining of politics and armed forces for eternity.

Admittedly, armed forces constitute the “Coercive Face” of the State. In the context of Hybrid Warfare today, antiquated-cum-classical thinking of “maintaining apolitical stance” relevant to “Conventional Hot War scenarios” does not and cannot hold good. Accept all alike that when employed in counter insurgency and even counter terrorism roles, politicization of armed forces is inevitable.

When viewed from the dramatic and dynamic environmental transformations over the past seven decades, let me highlight that from day one starting with communal genocide during partition days, our young democracy is dependent on the armed forces for civil assistance. “Aid to Civil Authority” is one of the key roles.

Next, “Politicization of Armed Forces” started with their involvement in post partition communal riots in Delhi and the appointment of the first C-in-C of Indian Army. Less known to public at large about the advice tendered by Generals Rajendra Singh and Nathu Singh not to overlook Gen Cariappa who was senior to them, when he was thinking of appointing one of them as the first Indian Army chief.

Followed politicization with series of supersession’s during Nehruvian era to include: Gen K S Thimayya superseding Gen Sant Singh and Kulwant Singh; and most disturbing elevation of Lt Gen B M Kaul, Army Service Corps Officer of Kashmiri lineage, to command the Corps in Tawang-Tsela Sectors during late 1959-1962 period that ended in the Himalayan Debacle 1962.

Less known also was the politicization of the armed forces during Bansi Lal and Mulayam Singh Yadav as Defense Ministers, which was grudgingly accepted as the norm that consolidated the trend.

Deeply engaged in such politico-military environments, its fallout was politicization of armed forces personnel at all levels. After all, the senior hierarchy has been repeatedly bending to the whims and fancies of the political leadership of the day: IPKF intervention in Sri Lanka which ab initio was doomed to fail, since it was against military professional wisdom after USAs Vietnam debacle – “Big Armies and Big Money” cannot quell insurgency in alien lands.

Add to it another significant issue, that is, the day armed forces accepted to function under “Unified Commands” by local Chief Ministers, they got irretrievably entwined in “politicization.”

Senior officers at operational, directional and functional levels including post commanders are compelled to interact closely not only with their civilian counterparts but also the population at large. Consequently, “politicization” is inevitable.

Based on exposures and experiences in Nagaland, Manipur and Assam (post-1962 India-China War era, 1985-1988, as a civilian in 1994-94), J & K (three tenures - 19160s, 1970s and 1980-1990s), Punjab (1977-70 breakout of Khalistan crisis), and IPKF, I had always expressed concern about “Politicization of Armed Forces” as consequence of repetitive employment in such roles resulting in dramatic armed forces personnel mindset transformations. And, the cliché “fight with One Hand to the Back”, armed forces excesses particularly against women and AFSPA contributing to slow and steady erosion in the “Public image” of the armed forces.

Of course, intellectuals and defense experts have never seriously reviewed and analyzed the causes behind people’s confidence or erosion in the armed forces in depth. Thus, diametrically divergent views are clouding perceptions about the image of armed forces today adding more confusion at the cost of clarity.

Accept everyone alike, armed forces personnel represent only microcosm of society. They can never be made insular. Most critical, hardly there is constructive exchange of views over the continuous employment of armed forces in counter insurgency and terrorism operations and their effects on veterans contributing to confused and contradictory perceptions over the issue of “Politicization of Armed Forces”.

People just gloss over the influences of employment and exposure in counter insurgency and terrorism operations continuously over the past six decades over the military personnel attitudes and behavior and even their families.

No longer, the strict code of discipline can prevent penetration of democratization into majority personal lives of the individuals and their families even whilst they remain in service what to talk of on shedding their uniforms.

As per behavioral scientists, there are quite a few diametrically opposite views which are rarely debated, about the influence of the military and organizational ethos on individuals. As per one postulation, military behavior leads to accommodative, uncritical, authority-bound consciousness. Yet another school believes that military service develops and strengthens democratic awareness.

Furthermore, one section believes that military service leads to a destabilization of social orientation systems during induction/recruit training. Emphasis on discipline, strengthened by a practically impenetrable net of social controls, quickly leads the soldier to passive and apathetic behavior. The hierarchical structure, as well as the roles, and values of the military system, show a strong relationship to the structure of the authoritarian personality. For anyone holding a military position, this would automatically mean socialization toward the authoritarian posture. He grows unsure of his former status of ‘civilian’ and can make his life psychologically endurable only through conformity. In sum, it promotes an accommodating, ultimately undemocratic awareness.

The other opposite section believes that military service has a far-reaching influence on the social and political attitudes of soldiers, sailors and airmen. It creates a significant potential for democratic and civil awareness not only for the soldier himself but also for his immediate surroundings, his family and colleagues.

Of course, they also develop understanding of basic concepts of democracy as well as contra democracy practices like use of money and muscle power, besides the state and their functions and fundamental values. Its cumulative fallout is erosions of trust and confidence in the State and the government machinery.

Whilst the organization may restrain their expression whilst in uniform, their democratic expression – freedom – post-retirement allows them to make a clean-break with the past.

In sum, dynamic transformations engulfing the society around them too have definite influence on their mindsets. Multiple developments happening around them have resulted in increasing politicization of armed forces. So what? Why should not the armed forces personnel shedding uniforms participate actively in political activities?

Let me also highlight that in advanced western nations like the USA, “Armed Forces Personnel” are mostly “Politicized”. Ipso facto, quite a few Generals have gone on to become Presidents of USA due to their national security expertise. For example, General Dwight D. Eisenhower was the 34th President of the USA (Republican) from 1953 to 1961. Also, George H. W. Bush, Ronald Reagan, Jimmy Carter, Gerald Ford, Richard Nixon, John F. Kennedy and Lyndon B. Johnson (World War II) besides others in Korean and Vietnam Wars. In fact, majority of US Presidents had armed forces and war records.

The study of the course of politics in USA – the oldest democracy – clearly reveals that armed forces personnel play critical roles in politics. In the recent past, Gen Colin Powell served as Secretary of State (Minister of External Affairs) and Gen J N Mattis served as Secretary of Defense (Minister of Defense). Also, they appear before the Senate Committees and express their views frankly and boldly.

In sum, service in the armed forces is viewed favorably for political entry post-retirement in USA; not necessarily politicization undermining the “apolitical” nature.

Considering such examples in other nations, the cacophony indulged by veterans over “Politicization of Armed Forces” is unwarranted. By indulging in thoughtless vitriolic due to political partisan affiliations, they are only spreading confusion and eroding confidence of people in the military and its image.

Be that as it may, former Lt Gen Hooda, former Northern Army Commander and present Advisor to the Congress Party on National Security Affairs, is in the media headlines crying foul on “Politicization of Armed Forces”. By joining the Congress Party Bandwagon of cronies, former Lt Gen Hooda is also “Culpable of Politicization of Armed Forces”.

Finally, veterans are not a monolithic group. Many fault lines divide them. Unity among veterans is anathema. Majority of Armed Forces veterans simply fade away as ordinary citizens in society. Some among them air their views in writings about national security issues, particularly with regard to state of modernization of armed forces, their status, pay, perks and other welfare issues. There are few others who vociferously champion the cause of armed forces image on the visual media. Also, there are others who participate in debates as panelists on partisan political lines.

Having “toed the line of political masters of the day whilst in uniform like caged parrots”, quite a few among them roar as “tigers” in front of the visual media or during “Jantar Mantar” protest rallies merely for the sake of photo opportunities – more sound and fury; less substance.

Ask such veterans as to how many among them “voiced their concerns” whilst in uniform and resigned from service in protest for non-acceptance of their professional views. By exception only, one may find someone raising their hands.

In sum, dynamic developments are sweeping the “Armed Forces” and their mindsets. No longer blind allegiance to political leadership, considering gross civilian incompetence, can be expected from them. Veterans will question the political establishment on various issues not only directly affecting them but also national security issues. Accept the political establishments that the responsibility for the creeping politicization in the armed forces is squarely at their door steps due to ongoing mayhem or murder of democracy. If any, the veteran’s cacophony is bound to escalate.

However, veterans may like to appreciate that that political leaders in pursuit of power have utter disregard to ethical norms. What they are best or adept at is at instigating and provoking people to abandon other party’s affiliations and favor them in the current “battle of the ballot box”. Subsequently, abandon them for the following 5-years.

Viewed in such a overall environmental flux, the real issue to address by veterans must focus on the roles after shedding uniforms (as members of civil society) in the service of the nation to further national security interests, be it be in social, political, economic and other fields in a constructive manner.