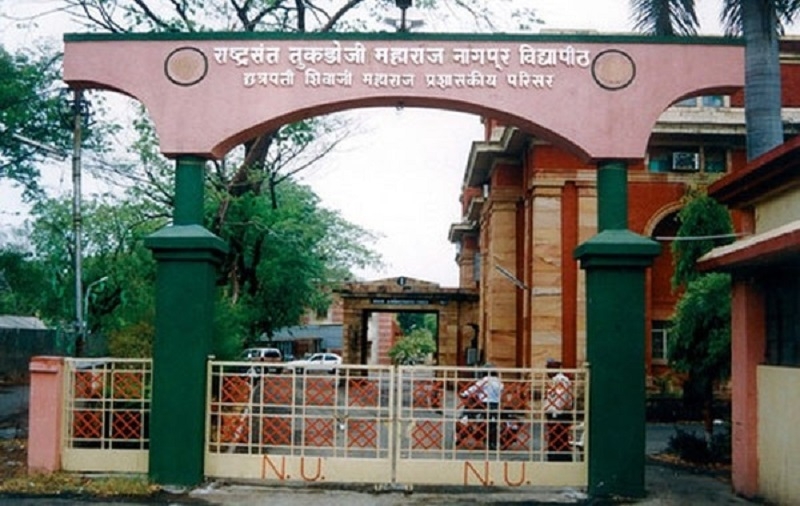 I was at Pune when my phone rang. My journalist friend was at the other end and wanted to know my reaction on inclusion of a chapter on RSS and its role in nation building. I told him plain and simple that RSS today is one of the largest NGOs (if we want to describe it in modern parlance) and has a huge strength of dedicated and committed activists who are engaged in multi-faceted service activities aimed at improving the living of the people and taking the country at the highest pinnacle of glory. So what is wrong if a university includes a chapter on RSS in its syllabus? We must congratulate the university.

Was he satisfied? I did not know. But I was more surprised by the widespread political reactions on this issue, mostly coming from the Congress leaders, and those who have a jaundiced view of RSS.

The whole thing began when a news item on inclusion of a chapter on RSS and its role in nation building was included in the B A Second Year syllabus by the Rashtrasant Tukdoji Maharaj Nagpur University appeared in the media. The reasons for adverse response to this were obvious. Nagpur happens to be the headquarters of this mighty global organization and the university is dominated by a section of intellectuals, academicians and leaders who hold a jaundiced view about this organization.

Added to this there are good number of journalists who too subscribe to this ‘anti-RSS’ view point. For all these persons, the decision of the Board of Studies (BoS) of Nagpur University was something blasphemous, fascist, anti-national and so on!

As expected, the Congress was at the forefront of the attack. Its state president and former Chief Minister Ashok Chavan reacted very sharply to this issue and in a twitter message asked the university authorities to teach students how the RSS opposed the 1942 Quit India movement, the Indian Constitution and the National Flag.


Former Union HRD Minister, lawyer and senior Congress leader Kapil Sibbal too reacted on the expected lines and raising doubts about RSS’ participation (or non-participation?) in the 1942 Quit India movement. I often wonder at the inability of these Congress leaders and RSS critics to ‘invent’ new issues to attack the RSS. They keep on raising those same out of the fashion issues time and again to malign the RSS.

The NSUI, the students’ wing of the Congress party, too raised the banner of protest threatening the university authorities to withdraw the chapter or face the music. However, the Vice-Chancellor Dr Siddharthvinayak Kane took a bold stance refusing to tow their demand. “We cannot go on accepting such demands”, Indian Express quoted him as saying. The NCP’s student wing activists even burned the effigy of the Vice-Chancellor for including this chapter on RSS in the fourth semester of B. A. syllabus.

Those who often try to implicate RSS for its alleged non-participation in the freedom struggle and particularly in the 1942 Quit India movement, need to be told that it was RSS people who provided safe shelter to freedom fighters and Congres leaders Aruna Asaf Ali, Krantisimha Nana Patil, and so on. Again, it was RSS swayamsevaks who kissed the gallows in Ashti-Chimur case while liberating that part from the British yoke.
It was the RSS people who took the lead in liberation of Goa, Diu and Daman from the Portuguese. Post-Independence it was only and only RSS that single-handedly fought to restore democracy during the 1975 emergency period. But the problem with these Congressmen is that they just refuse to see the facts and keep repeating the same old allegations. In the present case also they did not do anything different.
However, the BoS members expressed surprise over these sudden outbursts from the Congress leaders. They maintained that this topic was in syllabus for M A and it is only included at the graduation level from this year. Besides, other universities like Mumbai, Delhi, and Burdwan in West Bengal too have chapters on RSS’ role in nation building and during independence. Even the Gondwana University also has a similar chapter on RSS in its Post-graduate syllabus.

BoS Chairman Shyam Koreti said that the earlier chapter on Rise and Growth of Communalism that dealt with RSS, Muslims League and the Hindu Mahasabha was replaced with the “Role of RSS in Nation Building” referring to the work of RSS activists in social field, the relief works undertaken by them during natural calamities and accidents, etc.

These arguments and counter-arguments apart, I have some vital questions to raise in this regard. There are so many schools of thoughts around us and each one has its merits and demerits. For purely academic purpose, should we not study all such different ideologies, thought-processes and philosophies to enrich our level of information and level of knowledge? Why should we put some barriers in the process of learning? Why should we prevent the inquisitiveness and quest for learning new ideologies/philosophies/? Why not open the vistas of knowledge in this age of information technology?

Our ancestors proclaimed loud and clear (आ नो भद्रा क्रतवो यन्तु विश्वतः) “Let noble thoughts come to us from all directions”. And here by opposing a certain ideology/philosophy we are acting exactly opposite of that noble proclamation. What a shame! Ours is not a closed society. Here we welcomed thinkers of various hues and entertained philosophies of different kinds. We celebrated Adi Shankaracharya, Buddha, Mahavira, Charvaka, Guru Nanak Dev, various saints who adored the Bhakti tradition in the medieval period; Sri Ramakrishna Paramhamsa, Swami Vivekananda, Rishi Aurobindo, Swami Dayananda, Lokmanya Tilak, Veer Sawarkar, Mahatma Gandhi, Dr Hedgewar and so on. We have a shining galaxy of such thinkers, philosophers, social reformers, academicians and educationists that no country in the world boasts of. They have left a treasure of knowledge for the posterity to study, understand and apply whatever good for the betterment and uplift of the society so that our country becomes the world leader or ‘Vishwa Guru’.

The ideology of RSS is all inclusive. Sarsanghchalak Dr Mohanrao Bhagwat in his three-day lecture series last year made a very clear announcement of this inclusiveness when he said that the idea of Hindutva was incomplete without the Muslims (read non-Hindus).

In our country there are two basic schools of thought. The one that believes that the national life of this country began on August 15, 1947 when India became free of the British slavery, represents the Congress, the socialists, the secularists, the progressives, and so on. The other school believes that this is an ancient nation, a continuous cultural tradition, woven attractively by people speaking different tongues, wearing diverse dresses, having different food habits, and so on. But there has been an underlying flow of unity in this diversity that is flowing uninterrupted through the ages making this the most ancient nation of the world. The RSS belongs to this category and there is nothing wrong in this belief. One may agree or may not with this view, but that does not mean one should out rightly discard this ideology from the academic pursuit.

And what is the history of those who claim to be secular, progressive, modern, open-minded? The Congress party tried to ‘crush’ the RSS during Pt Nehru’s days by banning it under the false pretext of Gandhi murder in 1948; again in 1975 during the tenure of Nehru’s daughter Indira ‘Priyadarshini’ who declared internal emergency and put thousands of RSS workers behind the bars just to save her political power; and again in 1992 after the fall of the disputed structure at Ayodhya. It was the same Congress again that created a phobia and fear psychosis among the Muslims and Christians by spreading falsehoods about the RSS. It was the same Congress that in collusion with the Communists tried every opportunity to destroy the RSS. 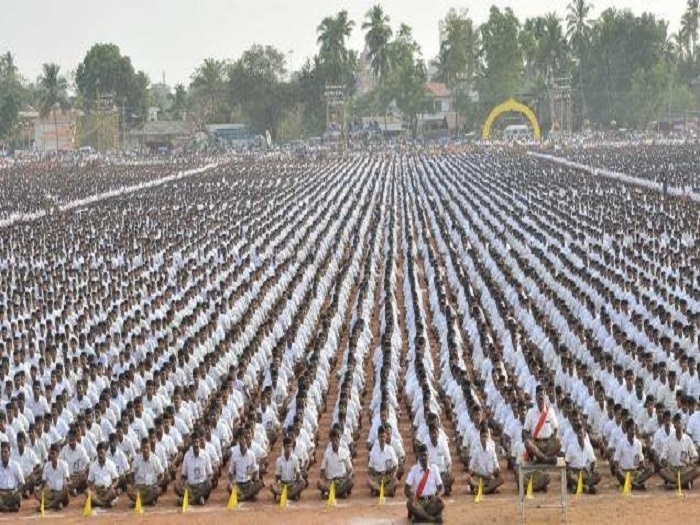 Today, the RSS is growing by leaps and bounds. The number of youngsters joining this organization is increasing by each passing day. This informal school of human resources development has trained lakhs of ‘swayamsevaks’ to serve the society in whatever way they can. These committed, dedicated and devoted ‘swayamsevaks’ today conduct 1.75 lakh service projects throughout the length and breadth of the country and even in the remote, inaccessible areas of the north-east region. And where does the Congress party stands in comparison of this? Do they run a single service project to name for the neglected, the downtrodden, and the depressed sections of the society?

RSS founder Dr Hedgewar used to say: “There are many colleges of arts but there is no college of hearts. The Sangh will be a college of hearts”. The unique technology the RSS has evolved and developed by amalgamating new ideas, concepts and techniques is worth studying. Many a foreign universities have taken up research studies on RSS and its affiliate organizations and the social transformation they have brought in the Indian society. Nagpur University has done a commendable job by introducing a chapter on RSS at the graduation level. The Vice-Chancellor, the members of the Board of Studies and all others deserve to be congratulated for this bold step.