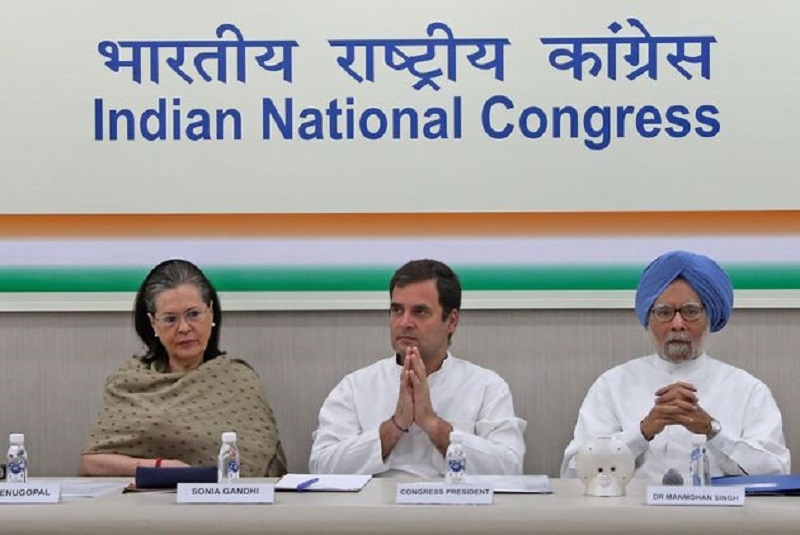 The ‘Grand Old Party’ of India has once again fallen in the hands of the ‘Grand Old Lady’, ironically though. The stalwarts of the Congress Party failed to choose the right kind of President for their party even after deliberations, discussions and meetings during the last couple of months and finally exhausted, they took refuge in the leadership of the ‘Mother Superior’ Sonia Gandhi.

Following the crushing debacle in 2019 general elections the Congress President ‘charismatic Shahjada’ Rahul Gandhi announced his quitting the post owning all the responsibility and remained firm on his decision rejecting the appeals of the party leaders. This forced them to relaunch their search for a new president.

Meanwhile, the name of Rahul’s sibling Priyanka Vadra was doing the rounds for the coveted post. But that again failed when Rahul Gandhi announced that no one from Gandhi family would lead the Congress again.

In absence of a party president the Congress has become a rudderless, directionless and leaderless party. Many stalwarts started deserting the sinking ship of the Congress and joining the BJP or Shiv Sena, obviously for their political future. In the absence of the president, the party ‘satraps’ were getting strong in their constituencies and this was visible when some of the close confidents of Rahul Gandhi supported the BJP Government move on Article 370 and 35A.

To permeate such anarchy would have proved very costly for the Congress party. So, when the CWC met, all eyes were on the possible president. Names like Mukul Wasnik, Mallikarjuna Kharge, were doing rounds. But the consensus was eluding. At this moment of confusion and indecision Mother Sonia enters and that suddenly changes the mood of the meeting.

There was a message circulated on WhatsApp groups. Someone suggests her name for the post, some other wants Rahul’s Mother could be better choice, yet somebody feels that late Rajiv Gandhi’s widow could inject the much needed elixir of strength in the party; still someone comes out with a suggestion to give the party command in the hands of Robert Vadra’s Mom-in-Law. And lo and Behold! Mother (Superior) Sonia is crowned as President of the Congress party!!

Though this was said to be an interim arrangement and the full-time president will be selected soon, the Congress sources said.

All said and done, the fact remains that the Congress party which has a long cherished history of 134 years is facing an existential crisis. The leadership of Rahul Gandhi as President and Priyanka Vadra as General Secretary has failed to inject new elixir of life in to the party organization. The successive crushing defeats in the General Elections in 2014 and 2019, the victory in MP, Chhattisgarh and Rajasthan notwithstanding, have made the Congress a spineless, directionless and rudderless party. Its leaders started speaking in different tongues on various issues of national importance. Blinded by the extreme hatred for Prime Minister Narendra Modi and Home Minister Amit Shah, the Congress leaders lost their balance of mind and often their actions and words went against the national interests. The best example is Jammu and Kashmir reorganization and Article 370 and 35A.

However, the history of Congress is moreover the history of Nehru-Gandhi family. Motilal Nehru, father of Jawaharlal, became the Congress President twice in 1919-20 and 1928-29. His son Jawaharlal, who was most ‘darling’ of Mahatma Gandhi, adored this top post seven times from 1929 to 1954. After a brief period, in 1959 his daughter ‘Priyadarshani’ Indira Gandhi, who imposed emergency in 1975 to save her political power and position, became the Congress President. Later in 1978 and 84 she was leading the Congress as President. After here assassination in 1984 the mental fell on the shoulders of her pilot son Rajiv Gandhi (who was reluctant to jump into political arena) who continued till 1991 and again after the break of seven years, the tradition resumed with Rajiv’s widow Sonia assuming the responsibility of the Congress President.

Sonia systematically tried to promote her son Rahul Gandhi and started grooming him to be next Congress President. And she did succeed in her mission. Rahul became the President of the party a couple of years ago but he failed to deliver the expected results. He, however, offered to resign taking all the discredit for party’s electoral debacle in 2019 thus making it imperative for the Congressmen to search for a new president.

And their search ended after a 75-day hectic effort at ‘Mother (Superior) Sonia’.

Will the Congress get the much needed booster dose under her leadership? Will she be able to rejuvenate the party machinery? Will the Congress be able to play the role of a constructive opposition in present context? These and some more questions are bound to raise their heads in the present situation. The country has seen the (non) performance of ‘Shahjada’ Rahul during two general elections; his own (non) performance as a member of parliament and his habit of relying on lies and repeating them forcefully. These things have caused immense damage to the Congress party’s political fortunes.

Then Priyanka Vadra was straightaway elevated to the post of party general secretary and put in charge of eastern Uttar Pradesh during the Lok Sabha elections. The Congressmen praised her, sang paeans eulogising her, and compared her with her grandmother Indira Gandhi for the facial similarities displaying their allegiance to the Gandhi family. But Priyanka too, failed to deliver and the party lost miserably in Uttar Pradesh.

With her two siblings performing dismally it was but natural for the ‘Mother Superior’ to take up the challenge and Sonia did it. But her age and health are the constraints of her leadership. Perhaps, that is why she insisted that this be made as a ‘stopgap arrangement’ and she will remain at the post till the new competent and energetic replacement is found.

The Congress is passing through a period of transition. The party is yet to reconcile to the fact that it has lost the political supremacy it once wielded throughout the length and breadth of the country. It has not yet accepted that its political constituency is shrinking with its most trusted Muslim and Dalit vote banks drifting away in the recent times. It has not yet realised that due to its anti-national stance and views on many issues, its upper caste Hindu vote share was also diminishing fast.

Therefore, the Congress needs a new, virile, dynamic and visionary leadership and not just become a protégé of one family. There are many good, nationalist, dynamic and visionary leaders in the Congress party and they should come forward to take up the challenge and steer the Congress party clear through the political and existential crises it is floating right now. For India needs a viable opposition party to keep the government on the right track and not just a family enterprise to serve the interests of the few. The Congress seriously needs to be purged of Gandhi Family.