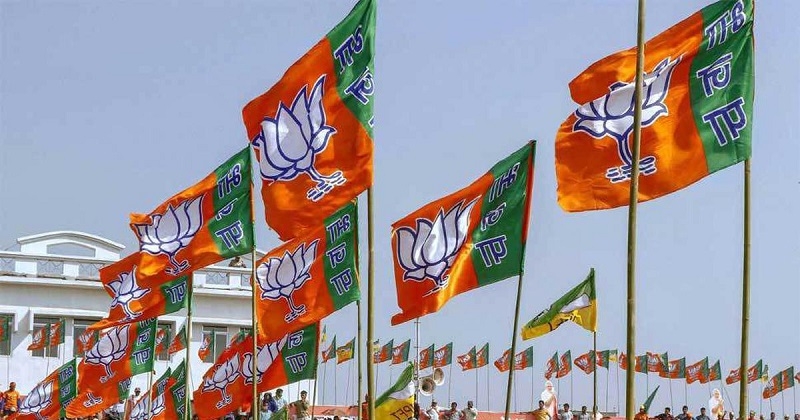 Notwithstanding its doubling the number of seats in the just concluded Zilla Parishad and Panchayat Samiti elections in  Maharaqshtra, the BJP had to cut a sorry figure as it lost the prestigeous Nagpur and Palgharzilla parishads to tri-party alliance called Maha Vikas Aghadi (MVA).

The party was made to bite the dust by the unholy alliance of the three parties - Shiv Sena, Congress and NCP soon after the Assembly elections in the state. Though the mandate was clearly for the BJP-SS combine, the power hungry Shiv Sena vehemently decided to chart a different course and broke away from the BJP throwing its 30 year long association to winds. With this a new political realignment has emerged in the state to challenge the BJP.
Nevertheless, the BJP could win 103 seats as compared to 53 of the last elections in these Gram Panchayat and Zilla Parishad elections where local issues dominate the voters’ mood. BJP emerged as a single majority party in Dhulia, Nandurbar, Palghar, Akola, Washim and Nagpur but has to remain out of power. Only in Jalgaon district the BJP was able to wield the power on its own.

As former Chief Minister and presently leader of opposition in the state Vidhan Sabha Devendra Fadnavis said, the performance of the BJP and its improvement in winning seats from 53 to 103 is no doubt spectacular. But it failed to retain Nagpur and Palghar.

The last five years Maharashtra witnessed a tornado of development under the BJP rule. From the urban cities to village level, works on roads, irrigation, power projects, and infrastructure development and so on were going on with great speed. The various development schemes of the state and central government were implemented full-fledged in the state. The Nagpur Metro, flyovers, better roads, etc. can be cited to drive the point home.

The BJP was in power at the centre, in the state and down to municipal corporations and zilla parishads to panchayat samitis. Yet this defeat at the hustings underlines the need for the party leadership for a serious introspection and review of the reasons for the defeat.

This setback the BJP received in these ZP and PS polls despite winning maximum seats points to the challenge the party is exposed to in the future. As far as politics in Maharashtra is concerned, the unholy, opportunistic alliance of the three parties has succeeded in keeping the BJP at a distance from the political power. Caste affiliations, money and muscle power or whatever maybe the reason, the ground reality is that the BJP is out of power in the state even at the lowest ebb.

This must force the party leadership to take a very serious note of the happening and replan their strategy. The Maharashtra experiment has emboldened the anti-BJP opposition parties and the just concluded Jharkhand assembly elections are the best example of this new direction in which the anti-BJP wind is blowing.

Though the BJP emerged single largest party with the kitty of 103 seats out of the total 332 in the state it failed to retain its strongholds of Nagpur and Palghar. Congress bagged 75 seats, Shiv Sena 46 and NCP with 43 seats came the fourth. But the alliance of Congress-Shiv Sena-NCP has pushed the BJP on the back foot in spite of its maximum seats. The same game is played here again to keep the BJP out.

Nagpur has been the stronghold of the BJP. It had 22 seats last time but now lost 7 and could satisfy on just 15 seats this time. Besides, the tri-party alliance surged ahead in Nandurbar, and Washim also where the BJP received a setback. But for Dhulia, the party cut a very sorry figure. In Dhulia however, it secured majority to establish its single handed rule. The BJP bagged 39 out of 56 seats to claim the majority.

The defeat of the party in Palghar is again a matter of concern. Out of the 57 seats, the BJP could retain only 10. In the last elections the party had won 21 seats. Shiv Sena surged ahead with 18 followed by the Congress with 15. BJP lost all the panchayat samities in this district.

In Nandurbar, the BJP has emerged as single largest party with 23 seats but the tri-party alliance will be able to keep it out of power here. Same is the case with Washim and Akola where the Vanchit Bahujan Aghadi (VBA) has emerged the clear winner.

By convention it is seen that the party that rules the state also rules the grass root level local bodies. With this, the victory of tri-party alliance can be justified but the defeat of the BJP is not. The BJP had ruled the state for full five years; implemented various development projects; introduced loan waiver scheme for the farmers; and left no stone unturned to ensure proper and equitable development of the state.

Yet the party faired not as expected. This is the biggest concern of the grass root workers, sympathizers and supporters of the BJP. The loss of states one by one in the north, west and east is definitely a serious cause for the party leadership to worry and take corrective steps. The party is to face the challenge and redraw its strategy to win the election. This is the only alternative left in democratic system.

The party bigwigs must also ponder over another reality. Since 1952 to 2014, barring a few exceptions, the Congress ruled the country from panchayat to parliament and in the states also. What was the strength of the Congress leadership that consistently appealed to the people and voters to give them political mandate in succession?

The party has given a call for ‘Congress Mukta Bharat’ but has it ever thought over the inherent strength of the party and its strategy to appeal to the people to support it? This is the time now. The Party must stop blaming others for its defeat and look within to search the reasons for this and take corrective measures to improve its performance.

The future of India is the BJP and not the Congress or parties sprung out from its various roots. They all will come together to stop the BJP from coming to power. Shiv Sena joining hands with the Congress and NCP is the best example to explain this point. The BJP must learn from such happenings and chart the course for its and for India’s bright future. This is the message of these elections.