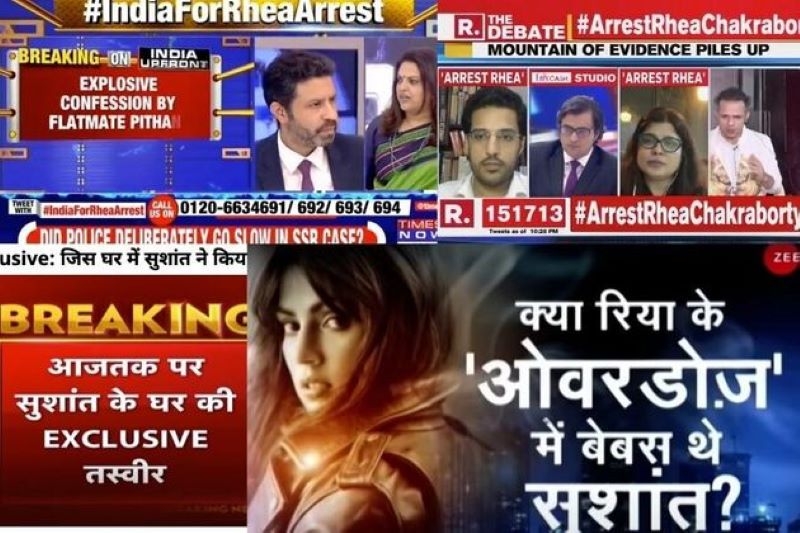 The mayhem of visual media 24x365 is the most heinous national security threat in being and in making. Freedom of the press sans responsibility is a sure recipe for self-destruction of society and nation.

No need for the conduct of “influence operations as part of Hybrid Warfare” by adversaries. Indian media houses are good enough to spread irreconcilable societal divide paving the way for the disintegration of modern India.

Media houses without exception claim that they cherish and fiercely protect their independence and reputation for objectivity, besides their relationship with all viewers and readers, regardless of political orientation. In reality, the majority carryout Sting operations, spread speculator rumors, spin conspiracy theories and give a partisan twist in their coverage. None can blame them for it is a basic human failing.

Undeniably, the media is highly powerful. Its reach is vast in all languages and in all remote corners. It influences and sways the opinion and psyche of people in positive or negative ways.

Media, the fourth pillar of the Constitution, fails to realize that it is decaying due to its intra-bitter rivalry. The collapse of it will unable to reform in time; so will democracy collapse; and the nation disintegrates.

And the reasons for visual media channels descending to the “lowest of low” levels are simple. Almost all news channels are sponsored and financed by corporate houses and different political organizations. Political and ideological affiliation governs their views.

Naturally, editors and anchors have to toe “His Masters Voice” – mouthpieces and lobbyists for their sponsors and patrons. Objectivity through rational analysis substantiated by irrefutable facts as evidence is no longer a feature. Fake and fraud news are repeatedly sensationalized.

Otherwise, how can anyone justify the visual media coverage since 14 June 2020 – nearly 115 days – of unbridled coverage of Sushant Singh Rajput suicide or murder trial with no end in sight? At the end, what will be its utility to the national security interests?

Can one individual death subsume all other events and developments of far greater concern like the COVID-19 fallout, Indo-Tibet Border crisis, modernization status of security forces to deter and dissuade adversaries, economic depression, financial stimulus packages, GST, technology design and developments, and other critical issues of growth and development? 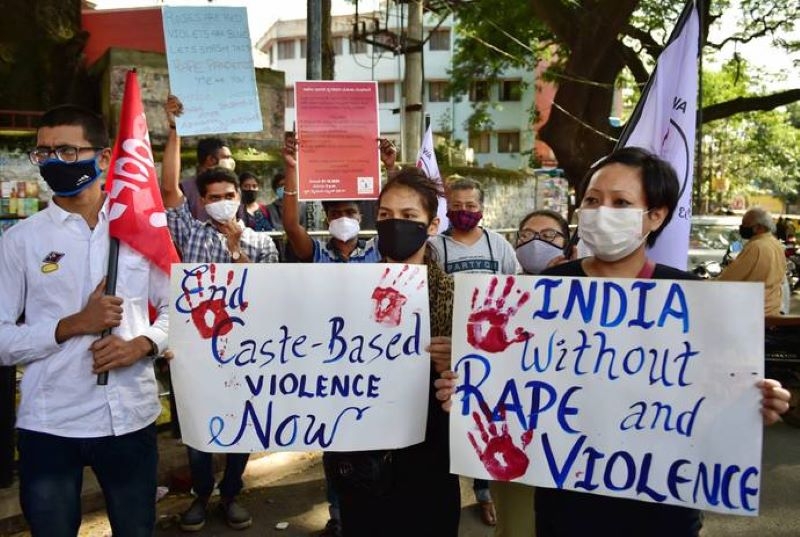 And, the latest is the “Hathras Rape” case. The coverage of its fallout will certainly drive a wedge in the already fractured society on the case and communal lines. It is in the full knowledge that persisting with the sensationalism of caste and communal conflicts is a sure recipe for conflict escalation with utter disregard for national security. Add to them, the latest “farmers protests and rallies”.

In sum, such oft repetitive coverage of news and views will only exacerbate and give fillip and unleash disruptive and destructive forces to riots and violent rampage – self-destructive means in pursuit of power by scoundrels.

Chinese observers and news channels like the Global Times are viewing the media’s vicious course with glee. Even Multi-Billionaire George Soros, who stands exposed as a threat to India, must be viewed with glee about the crisis proliferation. After all, he has spent millions of dollars to aid partisan media to influence people through anti-India coverage on Article 370 and anti-CAA riots. He is on record in a scathing attack in Davos on Modi for creating a Hindu nationalist state which threatens to marginalize the Muslim citizens of the country.

Of course, gone are the days of scholarly debates. Let me highlight that what is happening in the visual media is uncivilized media coverage of news and debates. News anchors and panelists are hell-bent upon spreading sponsored partisan, provocative and divisive poison. Outrageous insults, innuendos, and abusive outbursts are daily features.

Vituperative outbursts denigrating rivals are common. Talking over each other or the highest decibel ranting to suppress co-panelists and anchors is quite common. Quite often, debates descend and degenerate into vile, vicious, and acrimonious pandemonium.

Ironically, some anchors believe in monologue harangues with highly qualified domain experts remaining on mute mode. Narratives and discourses have sunken into abysmal depths. They are breeding intolerance and violence on narrow sectarian lines. Their fallout is simple – irretrievable national disunity.

In retrospect, editors, anchors conducting panel discussions, and panelists can be broadly categorized under various personality types to include: positive; and negative.

Those can be included under the positive categorization who are realistic and rational, friendly and exuberant, flexible and tolerant; warmhearted, conscientious, and cooperative. They generally remain cool and composed even under deliberate provocation. Very few can be identified in visual media houses.

Others can be included under the negative categories who are impulsive and compulsive, extroverts and hypocrites, obsessive and histrionic, narcissistic, and irrational. They generally adopt “know-all” postures and indulge in monotonous monologues to advance the storylines of paid partisan news coverage. The worst kinds of all of them are sadists who are sly and know how to get their way as slimy salesmen or mouthpieces of their political and corporate patrons. And, they are in majority.

Visual media wars have become quite endemic. No need to specifically look for one. All national English channels use every opportunity to take a jibe at each other – the most immature and gibberish manner. No need to single out anyone in particular. Journalists slam each other regularly on their news channels on a “No holds barred” basis. Surely, it reflects ‘very low and poor’ on their personality behavior claiming to be “Know-All” intellectuals.

The latest is punster Cyrus Broacha mimicking Arnab Goswami in the “The Week that wasn’t” – the News hour Spoof; I am the number one, I am the first - purportedly to be viewed purely as entertainment in a light-hearted vein. Be that the disclaimer may be, it mercilessly highlights the highly immature behavior of Arnab Goswami during the conduct of debates.

Add to it, the “Tools” by India today TV also slated to be an entertainer too gives a slant in its coverage. The latest to join the bandwagon is the “Kapil Sharma” show.

Almost all the senior editors and anchors suffer from tremendous super alter ego; quite a few suffer from narcissi. Then, lay false claims to objectivity. Of course, lack of decorum, decency, and dignity expected in the conduct of debates before the nation are common features. Never too late for them to learn from the western visual media channels to focus on identified issues and act as moderators.

Surely, anchors have been taught the functions of moderator during their course of studies in journalism. To recount for the layman, the duties of moderators include facilitating the introduction of participants in a forum, encouraging discussion of the agenda, maintaining order throughout the proceedings, ensuring that the interactions remain within the identified theme, and provide a balanced perspective of the agenda to the viewers to form their opinions.

Instead what is most commonly viewed is thrusting the anchor's partisan views not only on panelists but also on the viewers.

Furthermore, Indian media excels in attracting, inviting, and providing a free platform to Chinese and Pakistani representatives, to conduct a veiled form of “Hybrid Warfare”. One wonders whether the Chinese and Pakistani TV channels enjoy the same freedom to feature Indian domain experts an opportunity to present their contra views.

Yet another paradox is assembling 10 or more panelists to participate in 30 to 60minute debates. Very soon, they turn into a “shouting or ranting” bout. Sometimes, one can witness domain experts leaving the stage without uttering a single word. For example, in the past, muted spectatorship of Bharat Karnad, distinguished national security analyst, throughout the session.

Why such experts accept invitations to participate in such debates knowing that they may never get an opportunity to air their views should surprise all alike. Is it merely for a “photo opportunity’?

Furthermore, all channels without exception suffer from “Breaking News” syndrome claiming credit for covering the story first as if it is going to attract the viewer. “Sensationalism” is the norm – expert spin masters of news. Anchors convert minor incidents out of proportion into a major crisis with utter disregard to its highly sectarian divisive fallout, which is contra national security interests.

Finally, visual media makes “Hero’s” out of “Zeros” and portray them as “Demi-Gods”. High profile coverage of criminals-turned-political leaders elevates their status to bigger than life-size images.

Ironic but true, the majority of viewers are quite gullible unable to differentiate between real or paid or partisan news. At the same time, editorial staff must realize that quite a few viewers are no fools today; highly selective in choosing topics and news. So, they can earn their admiration, not by cheap gimmickry or sensationalism, but by responsible, balanced, and mature coverage.

Never too late for “Media Houses” to realize that “unabridged and unrestrained freedom” sans “caution, restraint and utmost responsibility” could eventually result in unmitigated disaster for national security from within – the most heinous.