Bodo Agreement to usher in a new dawn for Assam; PM Modi appeals extremists to Join the Mainstream

Total Views |
In a fervent appeal the Prime Minister Shri Narendra Modi today gave a clarion call to those pursuing the Path of Violence to lay down their arms and return to the mainstream like the Bodo Cadres. 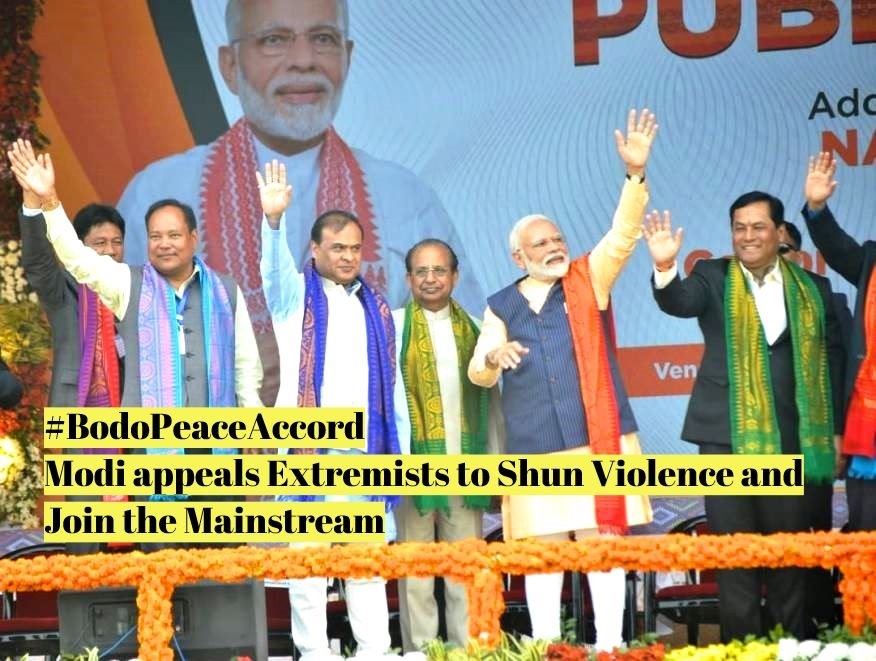 Prime Minister was participating in the celebrations of the signing of the Bodo Agreement at Kokrajhar in Assam today.
This is his first visit to the North-East since the signing of the historic accord on the 27th of January 2020.
“For those who continue to have faith in arms and violence either in the North East, or Naxal areas or Jammu Kashmir, I request them to learn and draw inspiration from the Bodo Youth and return to the Mainstream. Come back and start celebrating life”, he said.

Prime Minister praised the All Bodo Students Union (ABSU), the National Democratic Front of Bodoland (NDFB), Shri Hagrama Mahilare, the Chief of BTC and the Government of Assam for playing a very positive role in the Bodo agreement.
“Today is the day for the entire North East including Assam to welcome a new beginning in the 21st century, a new dawn, a new inspiration. Today is the day to take a pledge that development and trust would continue to be our mainstay and that they would be further strengthened. Let us not be engulfed by the darkness of violence ever again. Let us welcome a Peaceful Assam, a New Resolute India”, he said.
He termed the signing of the Bodo Accord as all the more significant as India is celebrating the 150th birth anniversary of Mahatma Gandhi this year. “Gandhi ji used to say that whatever be the fruits of non-violence, they would be accepted by all", Prime Minister added.
Dwelling on the Bodo Accord the Prime Minister said that it would benefit the entire people of the region. He said that the Powers of the Bodo Territorial Council (BTC) have been enhanced and strengthened under the accord.
“Everybody is a winner in this accord, peace is a winner and humanity is a winner in this accord”, he said.
A commission would be formed to determine the boundaries of the Bodo Territorial Area Districts (BTAD).
Prime Minister announced a package of Rs 1500 Crore to benefit Kokrajhar, Chirang, Baksa and Udalguri of the BTAD. “This would help in all round development of Bodo Culture, Region and Education”, he said.
Stressing on the increased responsibility of the BTC and the Government of Assam, the Prime Minister said that the motto of development would be only through Sabka Saath, Sabka Vikas and Sabka Vishwaas.
“Today, in the Bodo region, new hopes, new dreams, new spirits have been communicated, the responsibility of all of you has increased. I am confident that the Bodo Territorial Council will now develop a new model of development by taking every society here. This will strengthen Assam and strengthen the spirit of India, a superior India”, Prime Minister added.
Prime Minister said his Government wants to implement the Clause 6 of the Assam Accord and that it is waiting for the report of the committee.
New approach to meet aspirations of Northeast
Prime Minister said that the Government had adopted a new approach to deal with various issues plaguing the North East. He said such an approach was possible only after a deep understanding of the aspirations and the emotional issues of the region.
“The solutions were found through deliberations and discussions with all concerned and with empathy. They were found as we dealt with everyone as our own and not as outsiders. We conversed with them and made them feel one of our own. This has helped reduced extremism. Earlier, there were about 1000 killings in the North-East due to extremism but today, on the whole, the situation is normal and peaceful.
North East is the Growth Engine of the country
“Over 3 thousand kilometers of roads have been built in the North East in the last three-four years. New national highways have been approved. The entire North East rail network has been converted into broad gauge. There is also a focus on strengthening the youth of the Northeast with new institutions of education, skill and sports. Apart from this, new hostels have also been created for students of North East in Delhi and Bangalore”, Prime Minister added.
Prime Minister said that infrastructure doesnot mean a combination of mortar and cement. It has a human side to it. It makes people feel that someone cares for them.
“When lakhs of people get connectivity due to the completion of many projects hanging for decades like Bogibeel bridge, then their confidence in the government increases. This all-round development has played a very big role in turning separation into attachment. When there is attachment, when progress starts reaching out to everyone equally, people also get ready to work together. When people get ready to work together, even the biggest issues are resolved”, Prime Minister added.