No place for ‘Socialist & Secular’ in Indian Constitution

Basic tenets of the preamble of India's Constitution were rewritten most undemocratically in 1976 when the opposition was put behind bars, Parliament had extended tenure, and Indira’s election was under question & people’s democratic rights suspended. 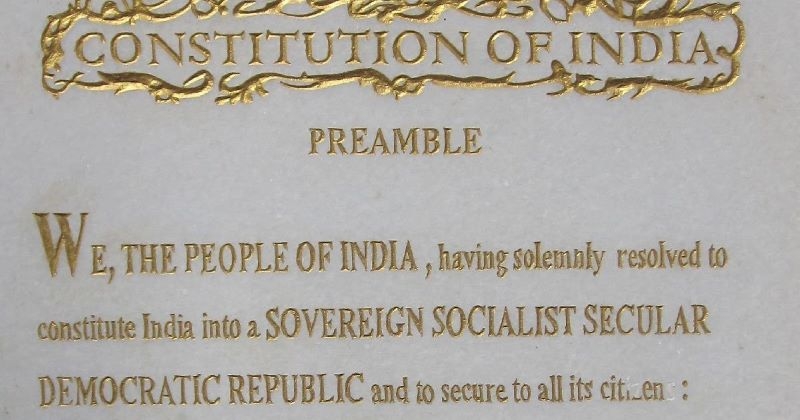 Sometimes ago a private member’s bill moved by BJP member in Rajya Sabha Rakesh Sinha has re-ignited the debate on the removal of the word 'socialist' from the Indian Constitution.

Exclusion of words like socialist and secular from the calendar along with the illustration on the Indian Constitution’s preamble in 2015 had also kicked up a row with ultra-secular gangs calling murder.

But, the Rajya Sabha secretariat had defended its move on excluding secular and socialist words in relation to the Indian Constitution defiantly.

If one were to go down the Indian history pages, there’s ample evidence to suggest that the words secular and socialist were never part of the Indian Constitution to start with.

These words made their way into the preamble through the backdoor during the draconian internal emergency imposed by then Prime Minister Indira Gandhi on 25 June 1975.

Earlier attempts to bring in borrowed words ‘secular’ and ‘socialist’ into the Indian Constitution failed beginning with rejection by Constituent Assembly.

Hence, the defining tenets of the Indian Constitution were amended in the most undemocratic way after having jailed most opposition members under draconian acts, suspension of fundamental rights in 1976.

There’s no denying that debates in constituent assembly discussed at length before rejecting then member K. T. Shah to get these two words into the constitution.

Extensive research shows that Shah made three attempts to get the face of the Constitution changed. And, on all three occasions, he was voted down.

Shah’s first mooted an amendment that in Clause (1) of Article 1, after the words ‘shall be a’ the words ‘Secular, Federal Socialist' be inserted’ way back in November 1948.

This amendment was opposed and rejected by the Assembly. Chairman of the Constitution’s drafting committee Dr. Bhim Rao Ambedkar was one of those that opposed Shah’s amendments.

Ambedkar had told the House, “I regret that I cannot accept the amendment of Professor K. T. Shah…What should be the policy of the State, how the Society should be organized in its social and economic side are matters which must be decided by the people themselves according to time and circumstances. It cannot be laid down in the Constitution itself, because that is destroying democracy altogether… you are, in my judgment, taking away the liberty of the people to decide what should be the social organization in which they wish to live.”

Shah made a second attempt on December 3, 1948, through a proposal to add new Article 18-A, “State in India being secular shall have no concern with any religion, creed or profession of faith and shall observe an attitude of absolute neutrality in all matters relating to the religion of any class of its citizens or other persons in the Union”. This time, the Assembly rejected the new Article without a discussion on it.

4. His third attempt was made through an amendment in Clause (1) of Article 19 on 3 December 1948 that said, “Provided that no propaganda in favor of any one religion, which is calculated to result in a change of faith by the individuals affected, shall be allowed in any school or college or other educational institution, in any hospital or asylum, or in any other place or institution where persons of tender age, or of unsound mind or body are liable to be exposed to undue influence from their teachers, nurses or physicians, keepers or guardians or any other person set in authority above them, and which is maintained wholly or partially from public revenues, or is in any way aided or protected by the Government of the Union, or of any State or public authority therein.” Article 19 gives the right of freedom of propaganda.

Lokanath Misra, yet another member of the House said on 6 December 1948 during the debate, “It has been repeated to our ears that ours is a secular State. I accepted this secularism in the sense that our State shall remain unconcerned with religion, and I thought that the secular State of partitioned India was the maximum of the generosity of a Hindu dominated territory for its non-Hindu population. I did not of course know what exactly this secularism meant and how far the State intends to cover the life and manners of our people.”

By majority ruling, both terms did not appear in the original Constitution. The preamble of the Constitution records solemn resolve the people of India to secure to all its citizens, social, economic and political justice, liberty of thought, expression, belief, faith and worship, and equality of status and of opportunity.

Fast-forwarding Indian modern political history, what happened during the internal emergency imposed on India by an undemocratic act of the then Congress government changed the Indian Constitution while the people had lost their basic democratic rights and the entire political opposition parties’ members were jailed.

The drama unfolded on 12 June 1975 when Allahabad High Court found Indira Gandhi guilty of using Government officials and machinery for her 1971 Lok Sabha election campaign. She was disqualified from being a Member of Parliament for six years.

India Gandhi’s conviction by the high court had fueled students’ agitation led by Jayprakash Narayan. In a rally of youth and students held in New Delhi on 22 June 1975 demanded her resignation as Prime Minister.

Two days later, the Supreme Court of India granted a conditional stay on the Allahabad High Court decision, allowing Indira Gandhi to be Member of Parliament but not to preside over Parliamentary proceedings. The next day, i.e. on 25 June 1975 she invoked an emergency that was endorsed and supported by the then President Fakhruddin Ali Ahmad.

It's during this period that the forty-two amendment of the Constitution was introduced in Lok Sabha. It was the most comprehensive amendment to Constitution that contained inclusion of ‘Socialist’ and ‘Secular’ in the preamble to Constitution; Primacy of Directive Principles over the Fundamental Rights, Extension of duration of Lok Sabha from 5 to 6 years, placement of all constitutional amendments beyond judicial scrutiny and making it obligatory for the President to accept the advice of Council of Ministers.

Then Law, Justice and Company Affairs Minister H.R. Gokhale had introduced Constitution (Forty Second Amendment) Bill in Lok Sabha on 21 May 1976. This happened at a time when Gandhi’s own future as an elected democratic leader and Member of Parliament were under serious scrutiny.

Forty-fourth Amendment was introduced in Lok Sabha on September 1, 1976, and H. R. Gokhale had tabled the related Bill 25 October 1976. It said, “The main objective of the amendment of the Preamble to my mind, is a very important and fundamental feature in the present amendment Bill to the Constitution,” Gokhale had stated.

Elections to fifth Lok Sabha were held in 1971 and Congress had secured an absolute majority. A later number of members from opposition like Jana Sangh and Swatantra Party had swelled. During the emergency, most opposition MPs were detained. Whoever from the opposition could make it to the debate, opposed the undemocratic amendment. The bill sailed through when opposition voice was suppressed and jailed, people’s fundamental rights were suspended to enable Indira Gandhi to stay in office.

Independent member from Ahmedabad P.G. Mavalankar who eventually became speaker of Lok Sabha said, “Preamble to our Constitution mentions ‘the dignity of the individual’. But I find that increased during the last 16 months and more, the dignity of the individual in India is being attacked and insulted, and I see that the individual is being constantly and increasingly haunted, humiliated, silenced and suppressed. Moreover, Sir, this Parliament has no mandate to make these amendments.”

Pratap Keshari Deo from Swatantra Party likened Indira’s rule with Hitler’s atrocities. “Coming to the Preamble, the word ‘Socialist’ is a very catchy slogan. It all depends on how you work it. Hitler also even called the Nazi Party as the National Socialist Party of Germany. If it means a better deal for the under-privileged and gives a comfortable living, there is nothing like it.” But, it did not.

While Lok Sabha's term was only five years, the term of the fifth house was pushed into the sixth year and then the constitutional amendment bill was rushed through a purported special session.

Interestingly members in Congress like Jamilur Rahman had gone to the extent of seeking an extension of Lok Sabha term to seven years. Another member D. Basumatari had even mooted that opposition members detained in jails should remain there. So, this Amendment Bill became an Act in such a ridiculous and undemocratic way.

The Constitution (Forty-Second Amendment) Act, 1976 was passed by Parliament and assented to by President of India on December 18, 1976. This Act was published in the Gazette of India Part II, Section I on 18 December 1976.

But Indira Gandhi’s folly continues to reverberate even today posing a serious existential threat to the very concept of Bharat.